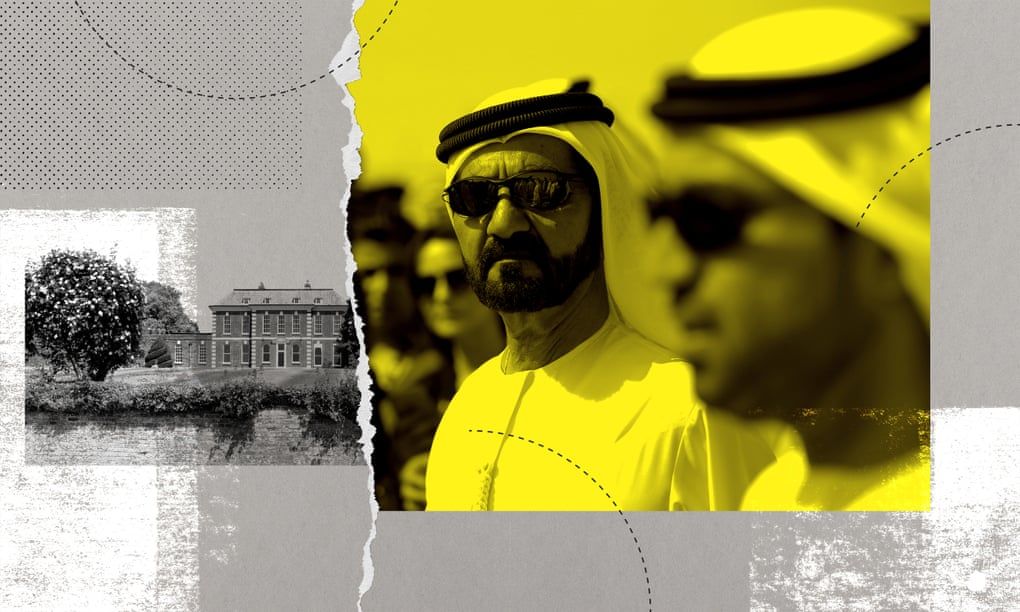 Holdings of more than 40,000 hectares in London, Scotland and Newmarket make Dubai ruler one of UK’s biggest landowners

The controversial ruler of Dubai has acquired a land and property empire in Britain that appears to exceed 40,000 hectares (100,000 acres), making him one of the country’s largest landowners, according to a Guardian analysis.

The huge property portfolio apparently owned by Sheikh Mohammed bin Rashid al-Maktoum and his close family ranges from mansions, stables and training gallops across Newmarket, to white stucco houses in some of London’s most exclusive addresses and extensive moorland including the 25,000-hectare Inverinate estate in the Scottish Highlands.

The Guardian has mapped these expansive private holdings linked to Sheikh Mohammed, who is vice-president and prime minister of the United Arab Emirates, using Land Registry records and company filings.

The exact scale of his British landholding is not known because most of the properties connected to him are owned via offshore companies in the tax havens of Guernsey and Jersey. That raises familiar questions about the secretive nature of large amounts of property ownership in Britain, and whether it is structured in ways to avoid paying UK taxes when the properties are sold.

A lawyer for Sheikh Mohammed declined to confirm any details of the properties or companies that own them, saying his financial affairs are private and confidential. The lawyer denied, however, that properties owned by Sheikh Mohammed had been bought by offshore companies, or that they were structured to avoid UK taxes.

Details of Sheikh Mohammed’s property holdings, which the Guardian compiled with Transparency International, suggest he owns more than 40,000 hectares, forming one source of his power and influence in Britain. The portfolio ranks him among the country’s biggest landowning families, and surpasses the size of the Queen’s personal estates, according to Guy Shrubsole, a leading expert in land ownership.

Sheikh Mohammed’s £75m Longcross estate in Surrey, bought in 1976, is now notorious as the residence from which his daughter, Princess Shamsa, tried to escape from his control 21 years ago. Last year’s devastating high court judgment found on the balance of probabilities, the civil standard of proof, that Sheikh Mohammed had Shamsa abducted in Cambridge, taken to another of his properties, in Newmarket – understood to be Dalham Hall – then flown back to Dubai, where he has since kept her captive.

Throughout that time and since the judgment, which also found that Sheikh Mohammed had Shamsa’s younger sister, Princess Latifa, abducted then imprisoned in Dubai in 2002 and 2018, he has constantly enlarged his British property portfolio.

In June, three months after the judgment was published, the same Guernsey-registered company that owns Longcross, Smech Properties, bought Woodhay, another huge mansion in Surrey, for £13m. A formidable, whitewashed pile with an entrance of neo-classical columns, Woodhay, according to its sales brochure, offers “a palatial” mansion with 10 bedroom suites, several living and entertaining rooms, a cinema and a “swimming pool hall/ballroom”.

Set in 10 hectares of parkland, the mansion is four miles from Ascot, where Sheikh Mohammed races thoroughbred horses from the stables of his global Godolphin operation. He has been a guest in the Queen’s carriage to Royal Ascot and strengthened their relationship through horseracing. 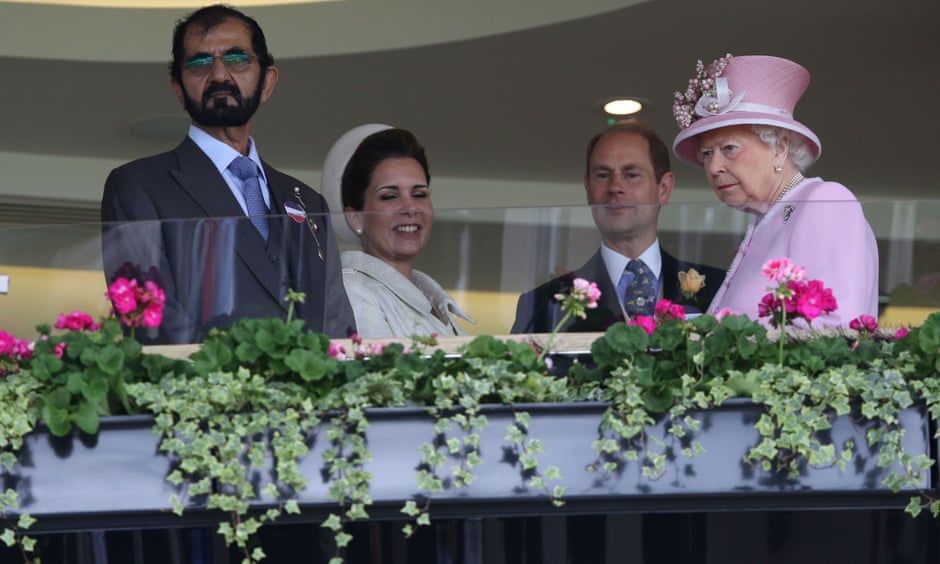 The Queen with Sheikh Mohammed, left, in the Royal Box at Ascot in 2016.

Sheikh Mohammed’s ubiquitous property ownership in Newmarket, headquarters of British horseracing, has long been a feature of the town, and the horses in his blue Godolphin livery are seen being walked from his historic stables to the open spaces of his training paddocks.

Less well-known is his ownership of many exclusive properties in some of the most prestigious parts of London: Knightsbridge, Belgravia and Kensington. In 2013, one of his family’s companies bought a property in Belgravia’s historic Eaton Square from the estate of the Duke of Westminster, for £17.3m – an illustration of historic British gentry selling to the dynastic billionaires of the Gulf.

In 2018 the purchase of Rutland House, a six-storey terrace in Knightsbridge, made headlines for its £61.5m mega-price, and the profit that made for the luxury property developer, Christian Candy, who had fitted it out with an underground swimming pool, aquarium and cinema.

The owner’s identity was unknown at the time, because the company that bought the house, Lizzium Ltd, is registered in Jersey, an offshore tax haven where the identities of beneficial owners are not disclosed. The Guardian’s investigation has found that Lizzium Ltd also owns Warren Towers, known to be one of Sheikh Mohammed’s main properties in Newmarket, overlooking his training gallops.

Sheikh Mohammed’s growing prominence in Britain, and the UAE’s booming fortunes, have increased his influence with the British establishment. 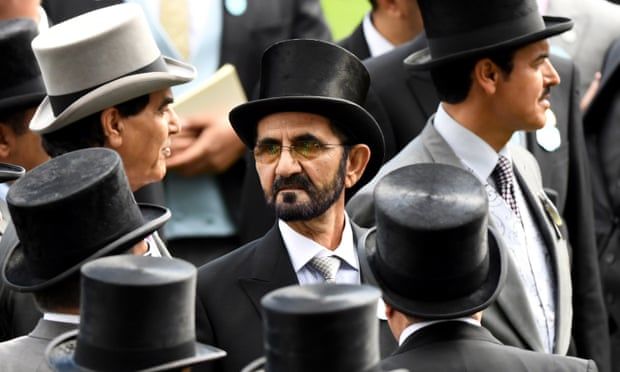 In the high court case, his sixth wife, Princess Haya, alleged that a Cambridgeshire police investigation into Shamsa’s abduction was halted in 2001 after representations were made on behalf of Sheikh Mohammed to the UK government.

The Foreign, Commonwealth and Development Office, which denies intervening, refused to disclose relevant information it held, saying that doing so “would reduce the UK government’s ability to protect and promote UK interests through its relations with the UAE.”

The judge, Sir Andrew McFarlane, said he could not make a finding on whether representations were made to the government, but the circumstances have led to a perception among the princesses’ supporters that Sheikh Mohammed has been allowed to operate with impunity in Britain.

His journey into the rarefied echelons of British society has been smoothed by his unrivalled investment in horseracing, more than £600m from 2011 to 2020 alone according to published figures, which has increasingly made the sport, and Newmarket itself, financially reliant on him. 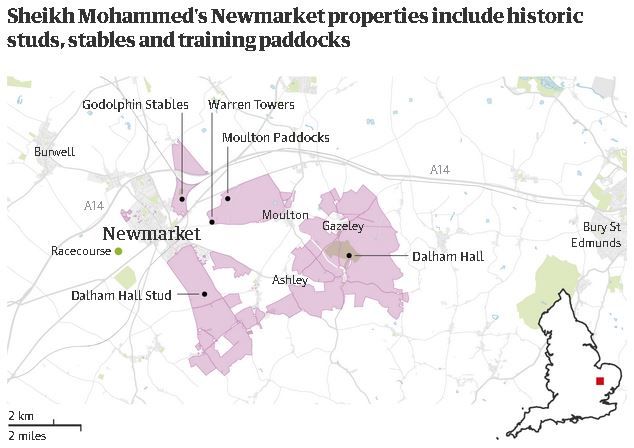 On a map of Newmarket, the properties Sheikh Mohammed has acquired, principally via Arat Investments Ltd, a Guernsey-registered company, appear to occupy an area equivalent to roughly half the town.

In 1981, Sheikh Mohammed bought the Dalham Hall Stud, 63 hectares sweeping off the Duchess Drive, which serves as Godolphin’s international headquarters. He added to his portfolio the historic Moulton Paddocks in 1994, now a base for trainer Charlie Appleby, incorporating grass and all-weather gallops, a swimming pool and equine spa. The Godolphin Stables, one of racing’s most famed venues, is similarly fitted out.

In addition to those and other studs, stables and gallops that dominate Newmarket’s horseracing heart, Land Registry filings show that Arat Investments owns more than 100 other properties, including dozens of ordinary houses around the town.

In 2019, the Jockey Club unveiled a portrait of Sheikh Mohammed to honour his contribution to horseracing, the Newmarket economy and various good works including a statue of the Queen, saying it was “our good fortune that he should have based his racing empire here in Newmarket”.

Since the court judgment, and the February release of a video in which Latifa said she has been kept imprisoned since her 2018 abduction, the Jockey Club has left any comment to the British Horseracing Authority, which has come under pressure to ban Sheikh Mohammed under its “fit and proper persons test”.

Julie Harrington, the BHA’s chief executive, last month declined to say if any action is being taken. “We have been in contact with the British government to explain our responsibilities as regulator,” she said, “as well as to highlight a significant investment and contribution to the British racing industry.”

Cambridgeshire police have said they are conducting a review into Shamsa’s abduction, including a 2019 letter from Latifa urging them to re-investigate.

Sheikh Mohammed’s case to the court was to deny that he had Shamsa and Latifa abducted, or imprisoned in Dubai. After the judgment was published, he said in a statement that it told “only one side of the story” because he had not been able to participate in the court process, although the judge said that he had.

In February, the UAE embassy said Latifa was “being cared for at home, supported by her family and medical professionals”, an account the FreeLatifa campaign emphatically rejects. On Friday the UN said the UAE had failed to provide the compelling proof it has sought that Latifa is alive.