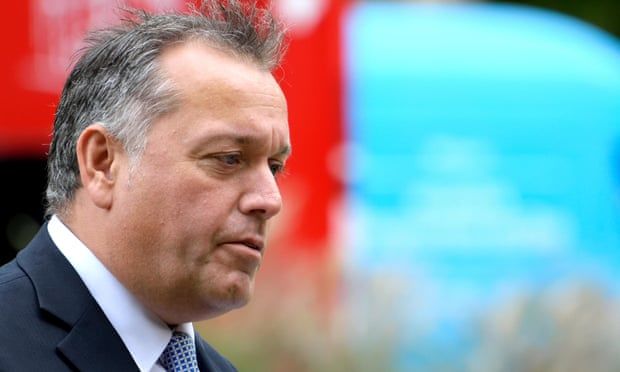 Exclusive: MP, who is facing allegations relating to sexual harassment and cocaine use, borrowed up to £150,000
A close relative of the Conservative MP David Warburton was offered a lucrative advisory role at the firm of a businessman who had provided the politician with an undeclared loan of up to £150,000 for a holiday rental property, the Guardian can reveal.

The party has removed the whip from the MP for Somerton and Frome, who is understood to be facing allegations of sexual harassment, cocaine use and failing to declare a loan from Roman Joukovski, a financial adviser who specialised in offshore tax advice and providing tier one “golden” investor visas to foreign citizens.

Warburton introduced his wife’s uncle, the businessman Rodney Baker-Bates, to Joukovski in summer 2018. Baker-Bates was subsequently offered a £75,000 a year advisory role at Dolfin, the business Joukovski founded, sources have told the Guardian.

After being asked to stay away from the parliamentary estate and reportedly being referred to parliament’s harassment watchdog, Warburton was taken to a psychiatric hospital on Sunday afternoon for treatment for shock and stress.

He is said to have denied any wrongdoing, and insisted that he had “enormous amounts of defence, but unfortunately the way things work means that doesn’t come out first”.

Colleagues expressed shock at the alleged behaviour, describing the married father-of-two as quiet, polite and hard-working.

But three women were quoted by the Sunday Times as having raised concerns about his conduct, and the paper also alleged that Warburton had received a loan of £100,000 from Joukovski.

Sources have told the Guardian the loan in 2017 was closer to £150,000 and was repaid with a “high interest rate” of 8%. The loan was for a holiday rental property and described by sources as being “commercially driven”. The loan was repaid in full.

MPs are required by parliamentary rules to register a so-called interest, in this case a loan, within 28 days if it has any bearing on their parliamentary activities. If an MP is any doubt about whether an interest should be declared, they are advised to do so. At no point has Warburton disclosed details of his financial relationship with Joukovski.

The accusations against him could provoke inquiries by three bodies. There is no allegation of wrongdoing against Joukovski or Baker-Bates.

There was no confirmation from the House of Commons about whether an investigation was under way by the Independent Complaints and Grievance System into the harassment complaints.

Scotland Yard did not say if it was examining the evidence of Warburton being pictured with lines of what appeared to be white powder.

And the parliamentary commissioner for standards, who looks into un-declared declarations, could start her own investigation if concerned the loan was not properly registered.

Diane Abbott, the Labour MP and former shadow home secretary, highlighted Warburton’s previous comments in the House of Commons concerning the “appalling exploitation” of young people by drug gangs. She said his comments had been a “gross hypocrisy”.

The Guardian has learned that a year after the loan was provided to him, Warburton introduced Baker-Bates to Joukovski.

The source confirmed reports in the Sunday Times that Warburton invited Joukovski, a Russian-born British citizen, to the Houses of Parliament and used his parliamentary email address to organise meetings for Joukovski, including one with Jacob Rees-Mogg, the now Brexit Opportunities secretary, who was a backbencher at the time in 2017.

An investigation by the Telegraph, SourceMaterial and OpenDemocracy revealed the firm was accused of “dishonestly or recklessly” misleading officials about its work for Nurali Aliyev, grandson of former Kazakh president Nursultan Nazarbayev.

The transport secretary, Grant Shapps, said the relevant processes should be gone through to look at Warburton’s conduct.

“Obviously, any allegations like this need to be taken extremely carefully, but all the facts will need to be brought out as well,” he told Sky News. “So until we get there I don’t think there’s much more I can helpfully add to it.”
Add Comment