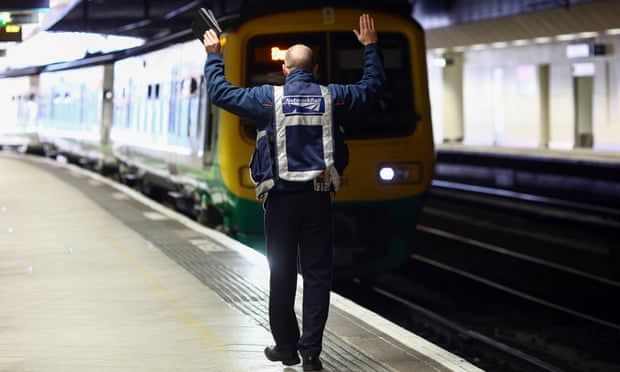 The Rail, Maritime and Transport (RMT) union has told members to prepare to “shut down the rail system” with strikes on 21, 23 and 25 June, after a ballot of 40,000 members last month resulted in staff at Network Rail and 13 train operating companies voting overwhelmingly for full-scale industrial action.

About 10,000 more RMT members in London will also hold a further tube strike on 21 June, in a coordinated move designed to head off possible job cuts at Transport for London and in the national rail network.

The planned strikes, starting on Tuesday 21 June and running through until Saturday, cover the busiest days of the week for rail since the pandemic. They will occur on the week of two byelections and disrupt travel to big events including the Glastonbury festival, the British athletics championships in Manchester, and concerts in London’s Hyde Park by Elton John and the Rolling Stones.

Neither Network Rail nor train operators have yet threatened compulsory redundancies but have been told to find £1bn-£2bn in annual savings, with passenger numbers still significantly below pre-Covid levels.

The RMT said that in talks since the ballot, rail companies had given no guarantees against redundancies, and were yet to offer pay rises to workers, many of whom had their wages frozen during the pandemic.

The RMT’s general secretary, Mick Lynch, said the union remained open to meaningful negotiations with the industry and ministers, but added: “Railway workers have been treated appallingly and despite our best efforts in negotiations, the rail industry with the support of the government has failed to take their concerns seriously.

“We have a cost of living crisis, and it is unacceptable for railway workers to either lose their jobs or face another year of a pay freeze when [RPI] inflation is at 11.1% and rising. Our union will now embark on a sustained campaign of industrial action which will shut down the railway system.

“Rail companies are making at least £500m a year in profits, while fat cat rail bosses have been paid millions during the Covid-19 pandemic. This unfairness is fuelling our members’ anger and their determination to win a fair settlement.”

The transport secretary, Grant Shapps, said: “It is incredibly disappointing the RMT have decided to take action that could drive passengers away from the rail network for good.

“The pandemic has changed travel habits – with 25% fewer ticket sales and the taxpayer stepping in to keep the railways running at a cost of £16bn, equivalent to £600 per household. We must act now to put the industry on a sustainable footing.

“We are working with industry to reduce disruption caused by strike action, but unions are jumping the gun by announcing this when talks have only just begun.”

Rail bosses said they would keep as much as possible of the timetable running. A walkout by Network Rail signallers will affect trains across England, Scotland and Wales.

The Rail Delivery Group chair, Steve Montgomery, urged the RMT to call off “needless and damaging strikes”. He said: “No one wins in the event of a strike. Staff lose pay, the industry loses vital revenue, making it harder to afford pay increases, and passengers and businesses are disrupted.

“While we will keep as many services running as possible, sadly if this action goes ahead, significant disruption will be inevitable. We therefore urge passengers to plan their journeys carefully and find alternative ways to travel during the strike period where possible.”

The strike could also cause some disruption to freight – potentially affecting supplies of biomass and coal to power stations such as Drax. Network Rail has played down the possibility of power outages, with only sustained strike action likely to cause issues.

The parallel strike on the London Underground follows a smaller walkout this week, which closed most stations in zone 1 on Monday and caused some disruption early in the Tuesday rush hour. The RMT is opposing TfL plans to reduce station staff numbers by about 600, 10-15% of the workforce, as part of cost-cutting plans agreed under the government’s emergency Covid funding for the capital.

So far, other rail unions have held back on industrial action, although Aslef, the drivers union, has warned it will not tolerate a pay freeze, and has balloted its members for action across several operating companies. It is in talks in Scotland over a pay rise, after drivers’ refusal to work on rest days led to many services being cancelled.
#COVID-19  #Covid
Add Comment