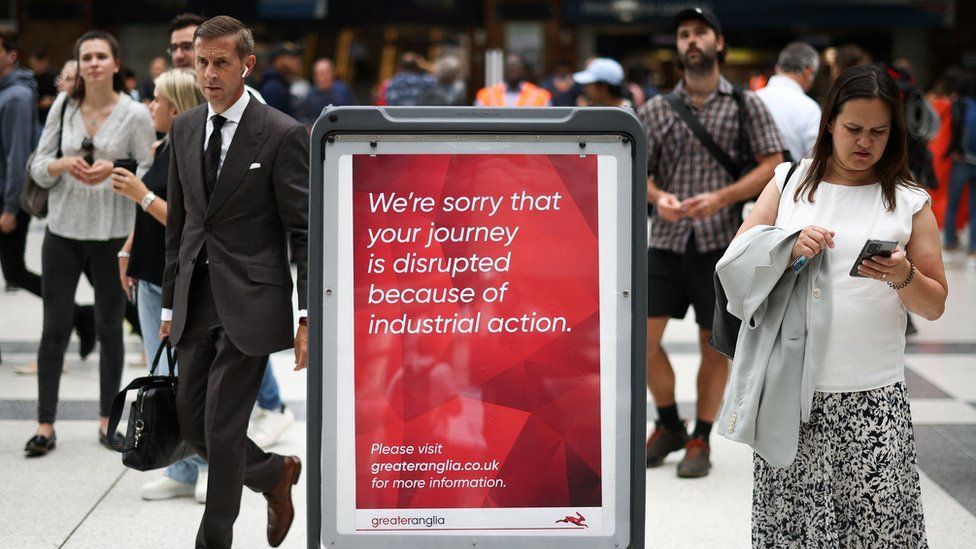 A third day of rail strikes are set to go ahead on Saturday after talks to end a dispute failed to reach an agreement.

People have been warned to make only necessary journeys over the weekend, with only one in five services running on Saturday.

Just 60% of trains were operating on Friday after RMT union strike action on Thursday led to delays.

Union bosses have warned more strikes are likely if a settlement over jobs cannot be reached.

Transport Secretary Grant Shapps called for the Rail, Maritime and Transport (RMT) union to call off Saturday's strike, urging them not to "keep hamstringing the country".

Talks with rail bosses continued on Friday but a deal has still not been reached.

There are likely to be further talks on Monday, although the BBC has been told these could also possibly begin on Sunday.

Members of the RMT at Network Rail and 13 train operators went on strike on Tuesday and Thursday as part of the dispute, in which they are looking for a pay rise of about 7% and assurances of no compulsory redundancies for their members.

The RMT's view remains that the key stumbling block to the negotiations is the lack of written commitment that no one will be forced out of their job.

Many train companies have ended services early on Friday ahead of the third day of action and passengers are being told only to travel by rail if necessary and to plan ahead.

Half of lines will be not be operating on Saturday as a result of the industrial action by around 40,000 RMT members.

Among the disrupted services are the Heathrow Express line taking travellers to London's busiest airport - which is also facing the threat of industrial action over the summer from British Airways staff.

Train journeys across Britain will primarily be restricted to main lines and these limited services will only run between 07:30 and 18:30. Some of the largest seaside resorts, including Bournemouth, Blackpool and Llandudno, will have no services at all.

Passengers with pre-booked tickets for Saturday are able to travel on Friday, Sunday or Monday instead, or claim a refund.

Disruption will continue into Sunday because of the knock-on effects of Saturday's walkout.

Some of Friday's rail delays were caused by trains not being able to leave overnight depots until around 06:00 BST, as staff who would have been on night shifts were not at work.

Services in Scotland and Wales have also been disrupted despite their rail networks being partially devolved, as they rely on trains from England and Network Rail staff. Northern Ireland's trains are unaffected.

The strikes have been estimated to have cost the rail industry up to £150m in lost revenue and caused the abandonment of some planned upgrade works.

'Only travel if necessary'

RMT general secretary Mick Lynch said the members on strike were "leading the way in standing up for all working people trying to get a pay rise and some job security".

He called on ministers to "get in the room or get out of the way" to help resolve the dispute, noting that the RMT had "successfully struck dozens of deals" with rail firms.

Speaking on BBC Question Time on Thursday, Mr Lynch also repeated his claim that the government were responsible for deadlock, telling the audience rail companies had told him "face to face they could achieve a guarantee of no compulsory redundancies" - but they were "not being allowed to".

The government has said it is the responsibility of the unions and rail companies to solve the dispute and denied being involved in them or causing any delays to negotiations.

Transport Secretary Grant Shapps said the action this week was "hurting the very people they claim to stand up for" and small businesses like pubs would be adversely affected on their busiest day of the week.

But he also claimed the two days of strike action so far this week have also shown that "overall rail strikes are not as effective a tool for the unions as they once were", as many more people can now work from home.

Network Rail - with whom the RMT are negotiating alongside the rail operators - also said it was the union, not the government, which had stalled negotiations.

Chief executive Andrew Haines said the "needless and premature" strike action would mean people would "suffer again" over the weekend.

Steve Montgomery, chair of the Rail Delivery Group, said the union must work with rail operators to modernise "outdated working practices" so the industry can adapt to changing travel patterns.

He said: "While we are doing our best to minimise disruption to passengers, our advice is to only travel if it is necessary, and if you are going to travel, please plan ahead."