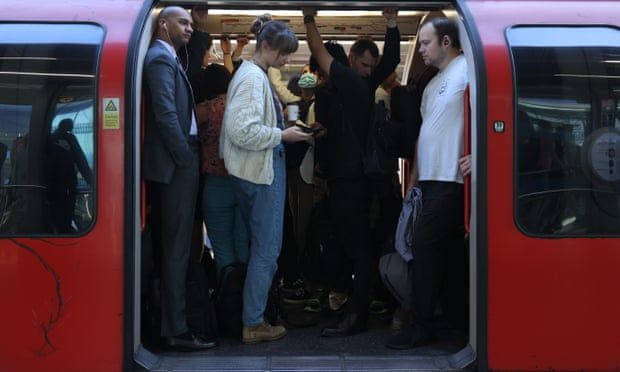 Transport bosses say services will be disrupted throughout the week after mass industrial action on Tuesday
Travel woes across Britain are due to continue as the fallout from rail strikes causes knock-on disruption.

Talks have resumed in an attempt to resolve the bitter dispute over jobs, pay and conditions following a mass strike of rail workers on Tuesday, with further strikes planned on Thursday and Saturday.

But transport bosses warned services would be disrupted on Wednesday and through the week, with many starting later than normal because overnight workers, including Network Rail (NR) signallers and control room staff, were part of Tuesday’s strike.

Wednesday was going to be “quite a messy day”, said Anthony Smith, the chief executive of Transport Focus.

“Virtually all of the train companies have special timetables in place, services are starting up late and trains and staff are not in the right place,” he told BBC Radio 4’s Today programme. “Today is going to be quite a messy day still. So please do not assume that this is a normal day.”

About 60% of trains will run across Wednesday as a whole, and some operators will stop services earlier than normal.

On Tuesday 80% of services were axed, leaving much of northern England, Wales and Scotland without any trains. About 40,000 members of the Rail, Maritime and Transport (RMT) union at Network Rail and 13 train operators are involved in the industrial action. A one-day London Underground strike by another 10,000 RMT members compounded difficulties in the capital on Tuesday by closing virtually the entire tube network.

The RMT general secretary, Mick Lynch, praised a “fantastic” turnout at picket lines and said the unioni would continue to fight for pay and conditions.

“RMT members are leading the way for all workers in this country who are sick and tired of having their pay and conditions slashed by a mixture of big business profits and government policy,” he said. “Now is the time to stand up and fight for every single railway worker in this dispute that we will win.”

On Wednesday the justice secretary, Dominic Raab, said the government had to “hold the line” against the RMT. “We’ve got to reform the way the railways operate,” he told LBC Radio, adding that there were “old practices, which frankly, are well out of date and unnecessary”.

Network Rail has increased pressure on the RMT by giving notice that it will start the formal process to push through changes to working practices and cut 1,800 maintenance staff, including compulsory redundancies if necessary. Hopes of a breakthrough this week remain slim after the union rejected offers worth 3% from the industry on Monday.

On Wednesday UK inflation increased to 9.1%, the highest rate in 40 years.

Raab said: “The one thing that will keep inflation higher for longer and undermine pay packets for longer is if we have spiralling public sector pay increases beyond what is responsible. And that’s what’s at issue here. It is precisely to protect the wages of those on the lowest incomes that we need to hold the line.”

Raab defended restoring the pensions triple lock, which will mean the state pension will rise in line with inflation. “[Pensioners] are particularly vulnerable and they are disproportionately affected by the increase in energy costs which we know everyone is facing,” he told the Today programme.

He said the government had committed £37bn to help people cope with rising costs, but that pay demands would “see inflation stay higher for longer and that only hurts the poorest the worst”.

Polls show three out of five people are supportive of the right to strike, with 35% opposed.

In a survey of more than 2,300 people by Savanta ComRes, 58% said the industrial action was justified. Younger adults aged 18-34 (72%) and Labour voters (79%) were more likely to consider the strikes justified. Only 44% of respondents over 55 supported the strikes, and 38% of Conservative voters.

Boris Johnson has warned the public of further strike action, saying Downing Street would “not give in” to demands from the rail unions.
#Boris Johnson  #Dominic Raab  #Johnson  #Raab
Add Comment