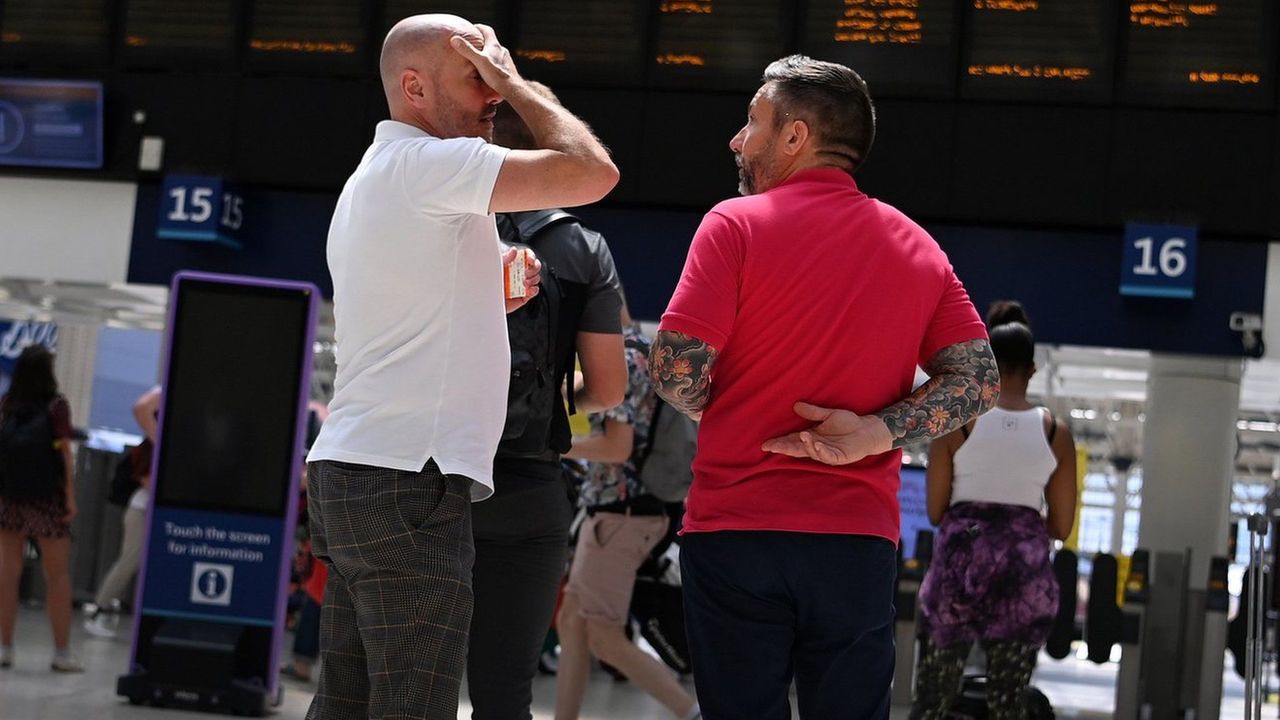 Rail strikes: Not for government to intervene - Shapps

It is not for the government to intervene to stop rail strikes, the transport secretary has said - despite unions calling for talks.

Grant Shapps said the RMT union's request for a meeting was a "stunt" and the union was "determined to go on strike".

The union said politicians were failing to prevent its three days of industrial action next week.

Labour claimed ministers wanted the strikes to go ahead to "sow division".

Strikes will take place on almost all major lines across Britain on Tuesday, Thursday and Saturday, as well as on the London Underground on Tuesday.

There will also be knock-on effects on services on non-strike days, including Monday.

Even rail companies whose workers are not striking will be affected, as Network Rail workers are taking action - and they look after tracks and other infrastructure.

A special timetable will be in place across England, Scotland and Wales from Monday until Sunday.

The RMT said on Saturday that talks between the union and Network Rail had failed.

And he said Network Rail, which is government-owned, was being influenced by ministers.

"It's Shapps, [Boris] Johnson and Rishi Sunak who are stopping a deal being done in this dispute," he said.

But Network Rail said the RMT were dismissing talks before they had finished.

Amid calls for ministers to step in, Mr Shapps said negotiations had to take place between unions and employers and accused the RMT of "trying to create some sort of class war".

"In any pay discussion, in any negotiation over terms, over in this case modernisation, it's always the employer and the union who need to get together to speak," he said.

Although most rail operators are not owned by the government, they are not entirely independent.

The government provides subsidies to the network - including £16bn to keep the railways running during the pandemic - and owns Network Rail.

Steve Montgomery, who chairs the Rail Delivery Group of operators, said it was clear the industry could not keep asking the taxpayer to fund it.

"Instead of striking, we need the RMT leadership to work with us to secure a deal that is fair to our staff, fair to our passengers and fair to taxpayers," he said.

Labour's shadow levelling-up secretary Lisa Nandy told BBC One's Sunday Morning show the government had got to "get round the table" with rail workers.

She said it was "simply not good enough" that ministers had not met unions since 8 March.

The blame game is in full swing ahead of next week's strikes - the biggest on the railways in a generation.

The RMT says it is taking action to protect fair pay, conditions and to prevent job cuts. Other unions are warning they might take industrial action too if they don't get pay deals they deem to be acceptable. They believe inflation means a decent pay rise is essential.

But the government is up for the fight. Grant Shapps has been scathing of the RMT, saying its leadership seems to want a class war.

Treasury ministers also warn that if pay goes up too much, it could just make inflation worse.

The government says it wants to avoid the strike - but in cynical political terms, a row with a left-wing union is comfortable political ground for the Conservatives.

It's more tricky for Labour. The party's leadership says it doesn't want next week's strike to happen.

But is it backing the striking rail workers? There's been no definitive answer.

How much is a fair pay rise? That's for the negotiations, the party says.

Labour says everyone should get back around the table and find a way to avoid the strike - critics will see that as fence-sitting.

The RMT - which has 40,000 members across the rail network - has said its members are unhappy about stagnated pay and proposed job losses.

Mr Lynch denied the union was demanding a pay hike in line with the current RPI inflation rate - which was 11.1% in April - but said any proposed rise must reflect the higher cost of living.

He pointed out to Sky News that RPI in December, when he said a deal with Network Rail should have been struck, was 7.1%.

Mr Lynch earlier said the union had rejected a Network Rail offer of a 2% rise with a further 1% increase linked to job cuts. The RMT recently won an 8.4% pay rise on the London Underground, it said.

Meanwhile, Labour leader Sir Keir Starmer used a speech at a Labour event in Warwick to suggest Mr Shapps and Prime Minister Boris Johnson wanted the strikes to go ahead.

"They want the country to grind to a halt so they can feed off the division," he said.

Sir Keir said the strike would mean businesses would struggle with freight, schools exams would be hard to get to and hospital appointments would be missed.

"That's why I have said the strikes should not go ahead," he said.

*  When? There will be rail strikes on Tuesday, Thursday and Saturday and a London Underground Strike on Tuesday

*  Who? The RMT union's members include everyone from guards and catering staff to signallers and track maintenance workers. Train driver members of the Aslef union will be striking on Thursday and 2 July on Greater Anglia and 28, 29 June and 13, 14 July on Croydon Tramlink.

Liberal Democrat transport spokesperson Sarah Olney said of Mr Shapps: "Not bothering to avert a crisis is a sackable offence in any other workplace."

A Department for Transport spokesperson warned the railway industry was "still on life support" with passenger numbers down 25%.
They said train travel was now a choice - not a necessity - and strikes could risk losing customers in the future.

Transport Secretary Grant Shapps: "The strike is the last thing we need and it's jumping the gun"
Labour MP Lisa Nandy: "The government has got to get around the table"
#Boris Johnson  #Johnson
Add Comment