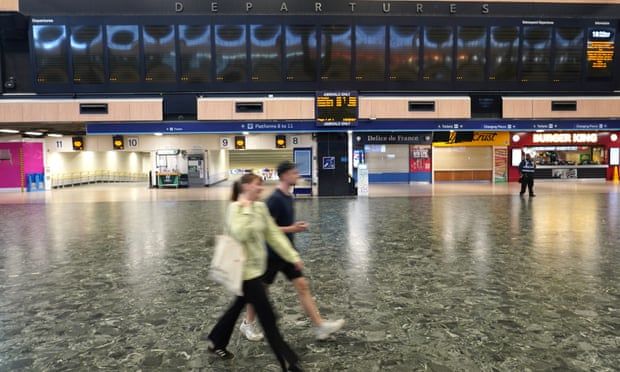 The first day of the biggest rail strikes in decades gave much of Great Britain a reminder of lockdown, with city centres quieter as millions avoided public transport, worked from home or took to their cars.

About 80% of services were axed during the 24-hour strike by 40,000 members of the RMT union, leaving much of northern England, Wales and Scotland without any trains. Of the few trains that ran and stations that remained open, most were quiet as passengers heeded advice to avoid travel.

A one-day London Underground strike by another 10,000 RMT members compounded difficulties for those who needed to cross the capital by closing virtually the entire tube network.

National rail services will start later in the day and with reduced schedules on Wednesday, owing to the knock-on effects of the walkout and striking staff in some overnight shifts.

Talks are set to resume between Network Rail and the RMT, as well as between the union and train operators, before two more national 24-hour walkouts planned on Thursday and Saturday.

Network Rail has ratcheted up the pressure on the RMT by giving notice that it will start the formal process to push through reforms to working practices and cut 1,800 maintenance staff, incorporating compulsory redundancies if necessary. Hopes of a breakthrough this week remain slim, after the union rejected offers worth 3% from the industry on Monday.

In a letter handed to the RMT leadership, Network Rail said it “cannot delay any longer” on plans to reform its maintenance regimes, though it would “much prefer to implement them with your agreement and cooperation”.

Tim Shoveller, Network Rail’s chief negotiator, said: “The changes will mean dumping outdated working practices and introducing new technology, both of which will lead to a more effective and safer maintenance organisation.” 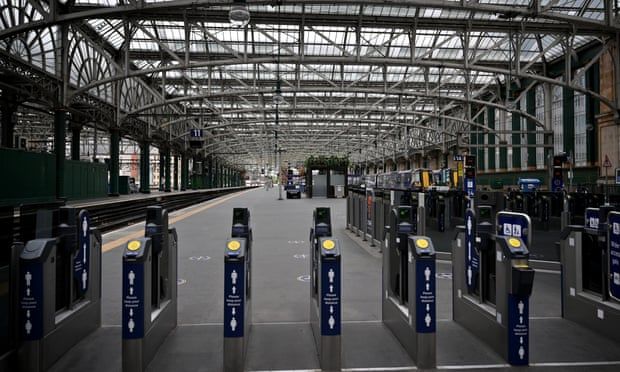 He said he hoped the majority of the 1,800 job losses would come “through voluntary severance and natural wastage” – although voluntary redundancies would require the union to accept the reforms.

The RMT general secretary, Mick Lynch, said the turnout at picket lines was “fantastic and exceeded expectations”, and pledged that members would continue the campaign, “leading the way for all workers in this country who are sick and tired of having their pay and conditions slashed by a mixture of big business profits and government policy”.

A Department for Transport spokesperson said the shutdown had hit businesses and unfairly cut people off from hospitals, schools and work, adding: “However, early data shows that unlike in the past many people now have the opportunity to work from home, so we haven’t even [had] a rush to the roads, as traffic has instead gone online, which means the unions aren’t having the overall impact they might have hoped.”

As a result of the tube strike, London was most affected by rising traffic, according to data from satnav company TomTom, with morning congestion levels – measured in terms of additional time needed to travel compared with free-flowing traffic – up from 77% a week ago to 98% today. Liverpool’s 8am congestion levels increased from 48% to 55% and Newcastle’s from 50% to 57%.

Waze, another satnav company, said there was “bumper-to-bumper traffic” on the M25, M1 and M40 into London with increased congestion in residential boroughs such as Ealing, Barking and Edmonton, with traffic moving at about 8mph in the morning.

The transport secretary, Grant Shapps, described the walkouts as a “stunt” and refused to enter talks, saying it would “make matters worse”. He reiterated government plans to amend strike laws and allow agency workers to step in to roles including rail control, which unions dismissed as unworkable.

A number of Labour backbench MPs appeared on the picket lines to offer outright support, while the party leadership equivocated over whether to back the action, which Conservatives have sought to blame on the opposition. 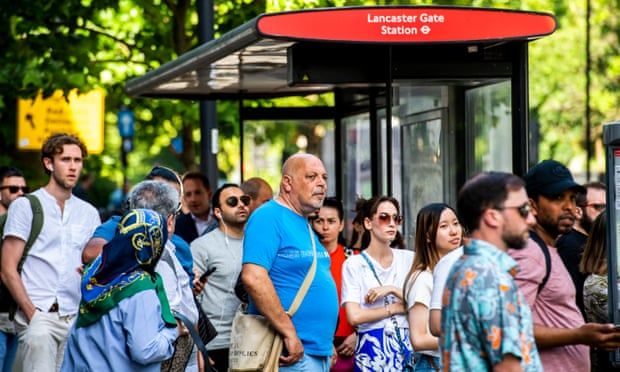 People waiting for a bus in central London.

The prime minister, Boris Johnson, told the cabinet that commuters must be ready to “stay the course” and prepare for further strikes, warning that without fundamental changes to the way the system operates, fares would rise and the industry would decline.

The rail industry estimates the strikes will cost £150m in lost revenue over the week – with fears that it will also encourage many to stay working from home just as rail numbers were returning to over 80% of pre-pandemic levels.

The hospitality industry said the hit could be even greater for restaurants, pubs and other businesses, with a potential £500m loss of revenue for a sector already battered by the coronavirus pandemic.

Footfall across all UK high streets was down 8.5% compared with last week, and down 27% in central London, according to retail data analyst Springboard.

Nevertheless, many Londoners also turned to cycling and walking to beat the tube strike, on a day of warm sunshine. Transport for London said there were only about 40,000 journeys on London Underground in the morning, a 95% fall from last week, with bus journeys up 7% on last week. Cycle hire was also up 46% compared with Monday.

Meanwhile, after predictions that the rail union’s stand could lead to a wider summer of discontent, the postal workers’ union said it was considering strike action after rejecting a 2% pay rise offer as “totally inadequate”.

The Communications Workers Union is to serve notice for a national ballot of Royal Mail staff as it pushes for an inflation-based, no strings award. Papers will be sent to CWU members on 28 June, with the result due three weeks later.