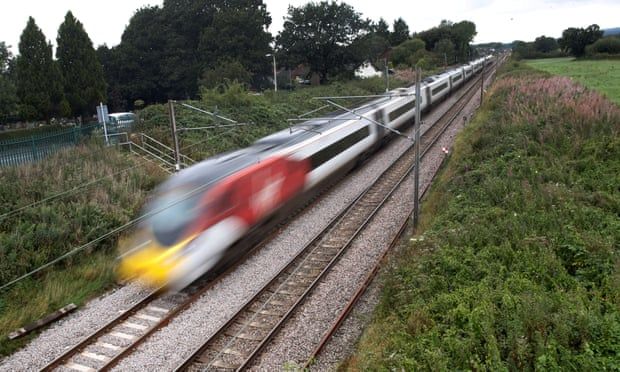 Local MPs opposed plan for 13-mile stretch of new track but industry says move is ‘hugely disappointing’
A £3bn branch of the High Speed 2 network designed to speed up rail journeys between London and Scotland has been quietly ditched by ministers, provoking outrage from rail industry groups.

The change was announced on Monday evening as the result of the confidence vote in Boris Johnson was being determined. Three leading industry bodies said the decision to scrap the Golborne link would create a bottleneck for trains and negatively affect passengers and freight.

The HS2 minister, Andrew Stephenson, said the decision followed reservations expressed by Sir Peter Hendy, the Network Rail chairman, whose union connectivity review said the link “does not resolve all of the identified issues” on the mainline between Scotland and Crewe.

The 13-mile stretch of new track would have carved through the Altrincham and Sale West constituency of Sir Graham Brady, the chair of the 1922 Committee, which ran Monday’s ballot of Conservative MPs.

It emerged earlier this year that the transport secretary, Grant Shapps, had given Brady “verbal assurances” that the link would be scrapped. The spur, allowing high-speed trains on the London-Manchester HS2 line to connect to the west coast mainline just south of Wigan, would have created more capacity and cut journey times to Glasgow.

However, MPs in the region, including a Labour MP as well as Brady and colleagues, have been campaigning for years to abolish the link, and the government had promised to consider alternatives. A HS2 bill published in February still included the link in the plans.

Ministers have yet to decide how to replace the link. Stephenson said: “It’s absolutely vital that we get this right from the outset. Removing this link is about ensuring that we’ve left no stone unturned when it comes to working with our Scottish counterparts to find a solution that will best serve the great people of Scotland.”

However, a spokesperson for the Railway Industry Association, the Rail Freight Group and the High Speed Rail Group said it was a “hugely disappointing” move “on a day when much political attention was focused elsewhere”, and would increase uncertainty for rail businesses and for people living along the line.

They said: “The link has been provided for in the budget for HS2 and is needed to allow adequate capacity on the national rail network to fulfil its vital function of handling the nation’s longer-distance movements of both passengers and freight. Without this connection, a bottleneck will be created north of Crewe on the west coast mainline, which in turn will negatively impact outcomes for passengers, decarbonisation and levelling up.”

The Department for Transport said the timing of the announcement had been planned in advance and the clash with the confidence vote was entirely coincidental.