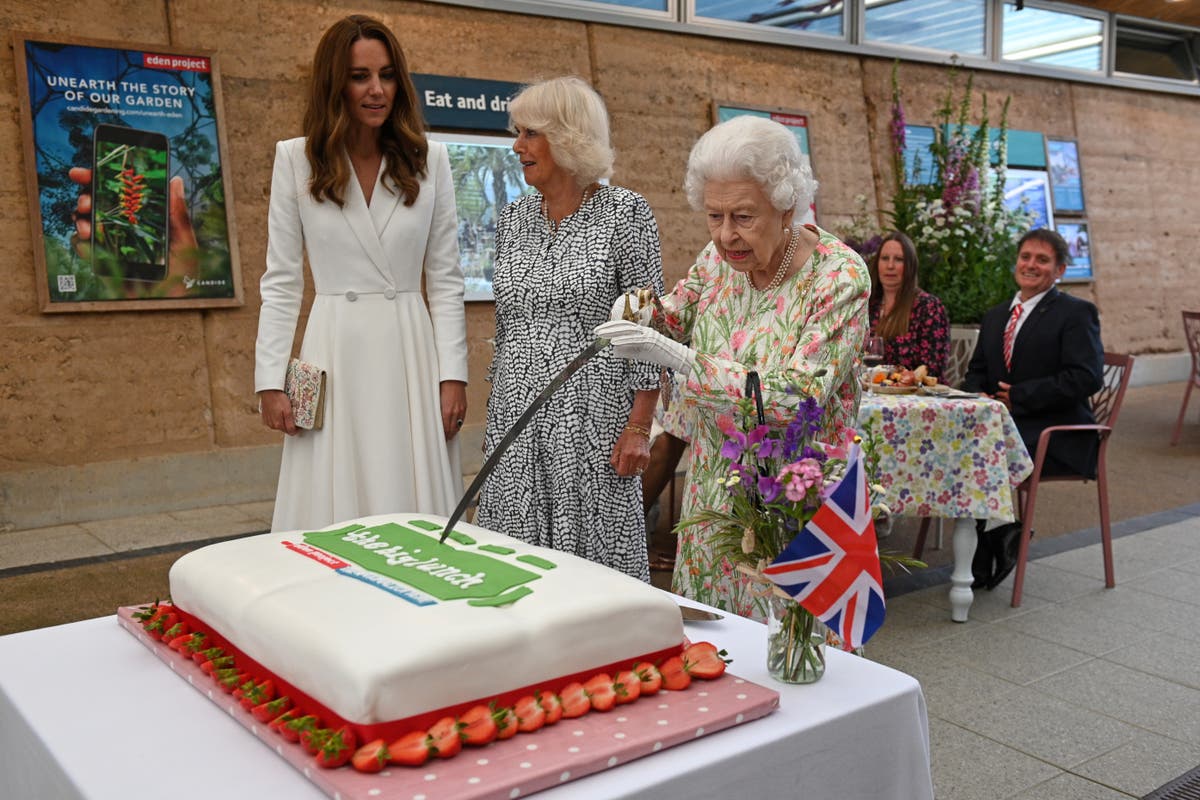 The monarch used the sword to cut a large cake marking the Big Lunch, which the Duchess of Cornwall is patron of.

The Queen insisted on borrowing a ceremonial sword to cut a cake during a royal engagement – prompting laughter from the Duchesses of Cornwall and Cambridge.

The monarch had been handed the sword by Edward Bolitho, the Lord-Lieutenant of Cornwall, for the task of cutting a large cake marking the Big Lunch at the Eden Project.

When told by an aide that there was a conventional knife available, the Queen replied: “I know there is, this is more unusual”. 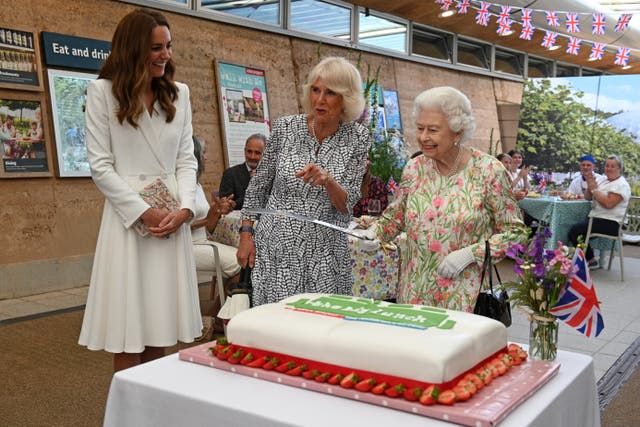 The Queen's use of the sword amused Kate and Camilla

The Duchess of Cornwall commented: “That’s slicing through” before assisting with the final part of cutting the cake, which was loudly applauded by those at the event.

After handing the ceremonial sword back, the Queen used a knife to cut a second slice of cake and remarked: “That looks very good.”

Peter Stewart, executive director of the Eden Project, introduced around 20 guests who had been invited to the event to the three royals.

“It is like comets – they don’t come around very often,” Mr Stewart said.

“I was trying to remember the last time that the three were on an official engagement together like this. I can only think of one at Fortnum and Mason but this was something else.

“The important thing for me was there was every reason not to do it.

“The fact that they judged that with the eyes of the G7 that there was an opportunity – with the risk of missing trains and everything else – to be able to listen to some of the heartfelt stories of people here.

“It was absolutely priceless.” 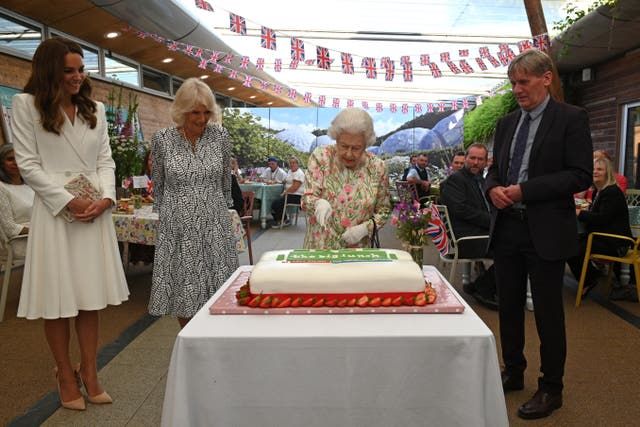 The Queen cutting a cake

Earlier, the Queen hosted an open-air reception at the Eden Project and was joined by the Prince of Wales, Duchess of Cornwall and the Duke and Duchess of Cambridge.

Leaders including German Chancellor Angela Merkel, as well as Canada’s Prime Minister Justin Trudeau and US President Joe Biden, were pictured chatting to the royals.

The Queen spoke to people at the Big Lunch event, held outdoors at a separate area of the Eden Project, about seeing the world leaders face-to-face following a year of restrictions due to the Covid-19 pandemic.

Mr Stewart described how the monarch discussed “communicating over Zoom and so-forth” due to coronavirus.

“She was talking about the fact she usually meets world leaders and she hasn’t met them for two years and she brought that back to the importance of everyday life and getting to know our neighbours,” he added. 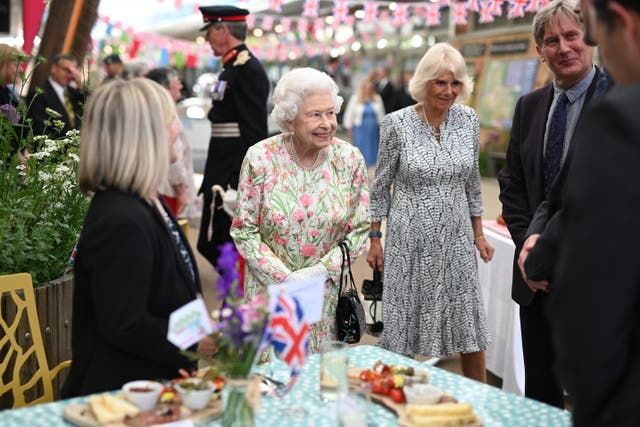 The Big Lunch is an annual get-together for neighbours and communities, with people encouraged to share friendship, food and to get to know each other better.

It has been running since 2009 and is an idea from the Eden Project, supported by the National Lottery.

The Duchess of Cornwall is patron of the event and celebrated its 10-year anniversary during a lunch at the Eden Project in 2019.

Over the past two years, it has run online due to Covid-19 but next year it will form an official part of the Queen’s Platinum Jubilee celebrations.

Mr Stewart paid tribute to the guests who attended Friday’s engagement, who had been nominated for their services, particularly during the pandemic.

“There was a moment where Her Majesty was talking to a lady called Irene Rowe, who was a care worker for 20 years and caught Covid and recovered and has returned to work,” he said.

“She came home and gave Covid to her husband, who sadly died. She asked Her Majesty how she was and gave sympathy to her for losing her own husband, the Duke of Edinburgh.” 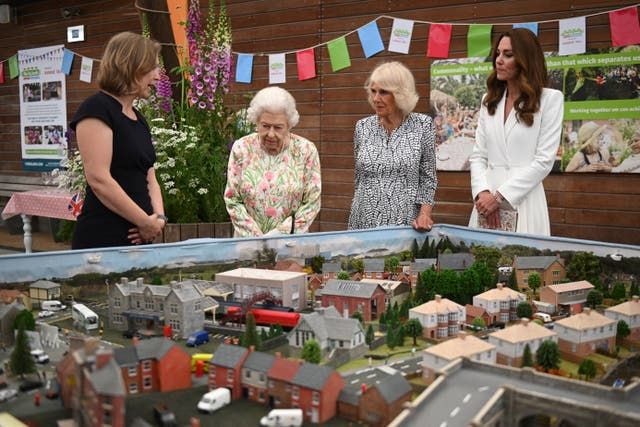 Programme director at the Eden Project, Lindsey Brummitt, shows a scale model of Big Lunch events to the royals

Mrs Rowe, 65, from Helston, spoke to both the Queen and Kate about the death of husband Malcolm, 62, in February this year.

After telling the Queen about her loss, she was asked how she was coping.

“I said you have been the same – you’ve just carried on like I have,” Mrs Rowe, a grandmother-of-eight, said.

“I said you have to carry on. I have good work, friends and family. People have been very kind.

“Kate touched my arm when I told her about my husband and said ‘oh no’.

“She was really caring and very nice, they both were.

“She asked if we got to see him in the hospital and I said we couldn’t, we weren’t allowed to.”

At the conclusion of the event, the Queen, Camilla and Kate left in separate vehicles.