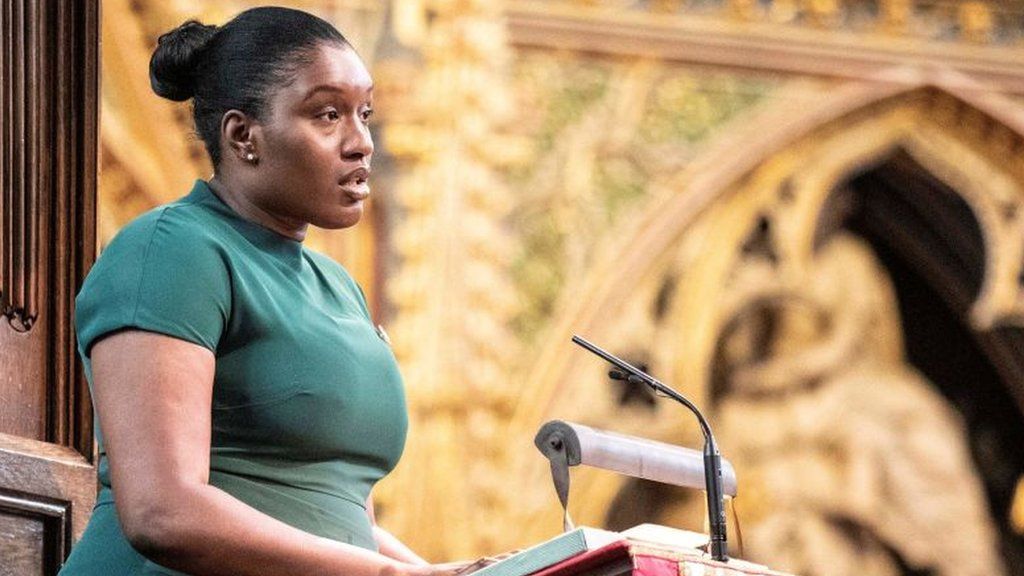 A Duke of Edinburgh Gold Award holder who spoke at the duke's thanksgiving service on Tuesday was thanked by the Queen after her speech.

Doyin Sonibare spoke to 1,800 people, including royalty and the prime minister, at Westminster Abbey.

The 28-year-old from east London said the award had been crucial in developing her life skills.

"I never thought I could do half of the things I have done in the last decade, yet I've been able to do so," she said.

The Queen sought out Ms Sonibare following the service and spent moments speaking with her.

"She thanked me for my speech - she was lovely, really kind. And she asked what I did for my Duke of Edinburgh's award," Ms Sonibare said.

The award scheme ambassador added: "I just got a message from my mum - she said: 'Congratulations, really proud of you', making her proud is the highlight of all of this."

"I was very grateful and it is something I hope to live to tell my children's children," she added.

In her speech, Ms Sonibare credited the duke's initiative with helping secure her first job at IBM aged 18 without professional experience.

"It all linked back to the award which actually links back to the golden word - opportunity," she said.

"On reflection, I never thought I could do half of the things I have done in the last decade, yet I've been able to do so because of the opportunities presented to me.

"In 1956, when the Duke of Edinburgh created the award, he had a vision to create a programme which supported the development of young people all over the world.

"Today, you've learnt how his legacy has impacted me and how it will continue to impact future generations to come."

She also told how she had to overcome a fear of climbing hills to pursue her DofE expedition."I wasn't completely sold on the idea at first," she admitted.

"I was happy I could learn new skills and build upon my interests such as learning how to drive and playing netball.

"But I was worried about the expedition, I grew up in east London and had never been camping before.

"I also had a fear of climbing steep hills - I kept thinking I was going to trip up, roll down the mountain and 'it's lights out for Doyin'. Fortunately for me, that didn't happen."

The account executive is now studying for a PhD in sickle cell research and health inequalities, and stressed the need to support the young in the wake of the pandemic.

Representatives of many of the duke's charities attended Tuesday's service - the first major event attended by the Queen this year.