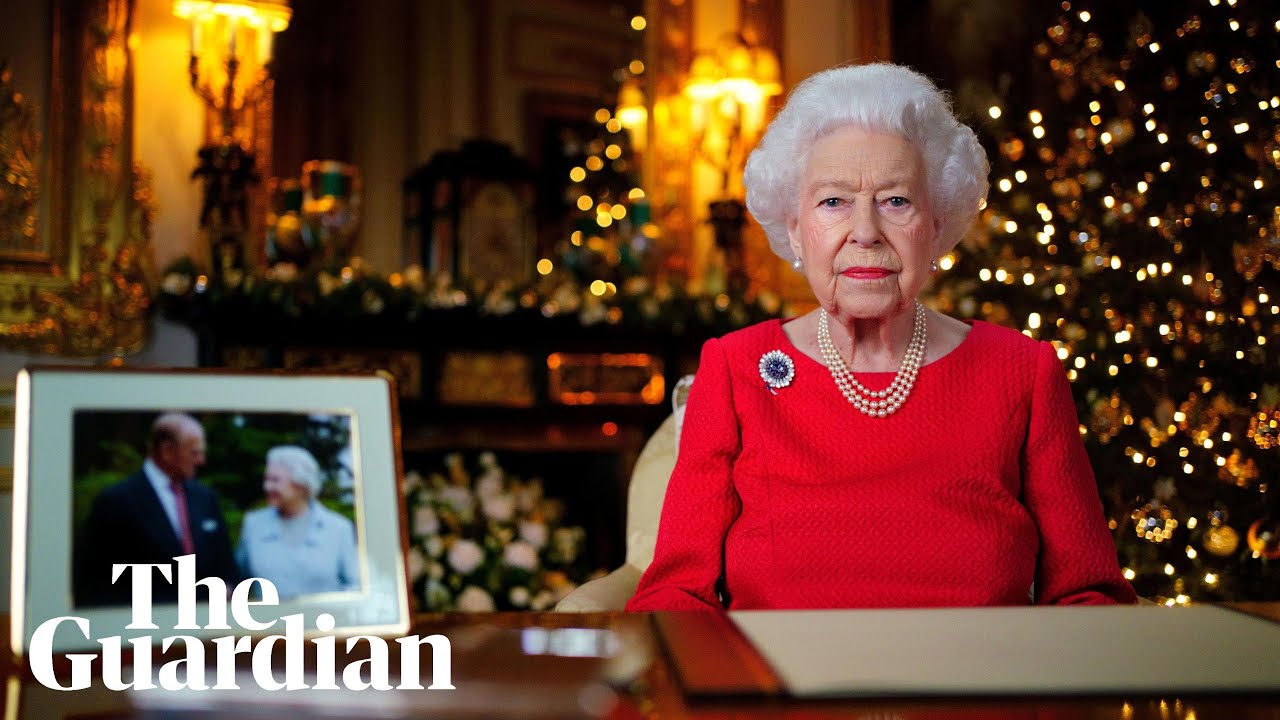 Monarch speaks of the death of Prince Philip, and encourages the nation to see the joy in simple things
The Queen looked back on a year marked by personal, as well as national, grief in her Christmas Day message – the first since the loss of her husband – yet strived to strike a more hopeful tone for the year to come.

As a second year marked by the Covid-19 pandemic drew towards its end, the 95-year-old monarch said she could understand the feelings of all those who have lost loved ones, having been bereaved herself in April. Nevertheless, she looked forward becoming the first British monarch to celebrate a platinum jubilee – 70 years on the throne – in 2022.

“Although it’s a time of great happiness and good cheer for many, Christmas can be hard for those who have lost loved ones. This year, especially, I understand why,” the Queen said in her annual televised address.

She wore the same sapphire chrysanthemum brooch as on her honeymoon in 1947, and displayed a framed picture of her and Prince Philip, the Duke of Edinburgh, on their 60th wedding anniversary.

Her Majesty told the nation that she had drawn great comfort from the “warmth and affection” shown in the tributes to the Duke of Edinburgh’s life. “His sense of service, intellectual curiosity and capacity to squeeze fun out of any situation were all irrepressible. That mischievous, enquiring twinkle was as bright at the end as when I first set eyes on him,” she added.

She also spoke fondly of Princes Charles and William, and their families, for their shared focus on climate change.

But there was no reference – either on screen or by name during the nine-minute broadcast – to her middle son Prince Andrew or Harry and Meghan; the trio having recently stepped back from royal duties.

The personal message is particularly apt given the upheaval many families have experienced during another year affected by coronavirus. The Queen acknowledged the impact of the Omicron variant, having cancelled her regular trip to Sandringham in order to spend Christmas at Windsor.

She was joined on the day by Charles and Camilla, Clarence House announced.

The Queen, whose speech was recorded in the White Drawing Room at Windsor Castle, said: “While Covid again means we can’t celebrate quite as we may have wished, we can still enjoy the many happy traditions.”

She added: “I am sure someone somewhere today will remark that Christmas is a time for children. It’s an engaging truth, but only half the story. Perhaps it’s truer to say that Christmas can speak to the child within us all. Adults, when weighed down with worries, sometimes fail to see the joy in simple things, where children do not.

“And, for me and my family, even with one familiar laugh missing this year, there will be joy in Christmas, as we have the chance to reminisce and see anew the wonder of the festive season through the eyes of our young children; of whom we were delighted to welcome four more this year.”

The Queen also hinted at the prospect of reuniting with loved ones in the new year.

She said: “February, just six weeks from now, will see the start of my Platinum Jubilee year, which I hope will be an opportunity for people everywhere to enjoy a sense of togetherness … and also to look ahead with confidence.”

And she added that, next summer, the nation will host the Commonwealth Games. “The baton is currently travelling the length and breadth of the Commonwealth, heading towards Birmingham, a beacon of hope on its journey. It will be a chance to celebrate the achievements of athletes and the coming-together of like-minded nations,” she said.

The Queen concluded: “I wish you all a very happy Christmas.”

The speech was broadcast hours after the Prince of Wales and the Duchess of Cornwall arrived for their annual morning service at St George’s Chapel, Windsor Castle, without the Queen.

It is understood the Queen’s absence from the service is a personal choice and follows a precautionary approach seen over the past six months.

The service, which is ticketed, is attended by residents of the Windsor estate and members of the chapel congregation.

Charles and Camilla were joined by the Earl and Countess of Wessex and the Duke and Duchess of Gloucester.
#Coronavirus  #COVID-19  #Covid
Add Comment