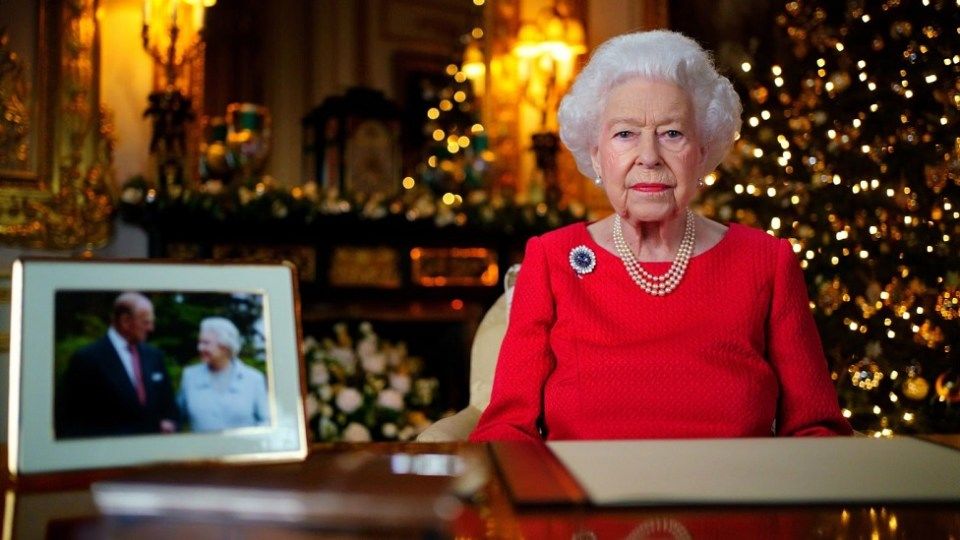 The Queen has paid tribute to her husband in her first annual Christmas message since his death.

"Christmas can be hard for those who have lost loved ones. This year especially I understand why," she said in a personal message.

She described Prince Philip as her "beloved", and said she felt his presence over the festive period.

The Queen's comments about loss come against the background of another year of the pandemic.

Speaking beside a photograph of them together, the Queen paid tribute to the late Duke of Edinburgh, her "irrepressible" husband of 73 years. 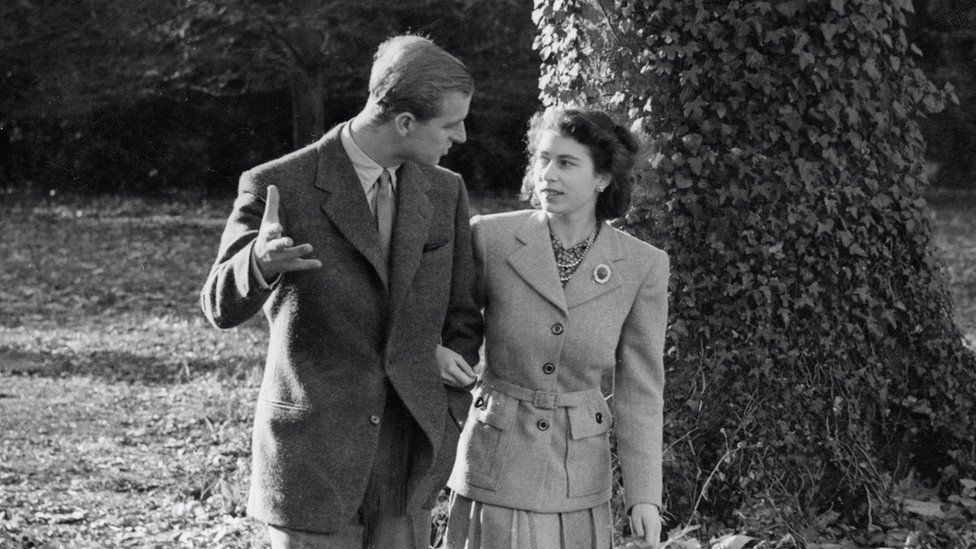 The Queen and Prince Philip on honeymoon, with the same sapphire brooch in view

"That mischievous, inquiring twinkle was as bright at the end as when I first set eyes on him," she said.

"But life of course consists of final partings as well as first meetings.

"And as much as I and my family miss him, I know he would want us to enjoy Christmas," said the Queen, remembering his "capacity to squeeze fun out of any situation".

The framed photograph in view during the broadcast was taken during their diamond wedding anniversary in 2007 - and the Queen was wearing the same sapphire brooch that appears in the photograph.

She also wore the same brooch, in the form of a chrysanthemum, on her honeymoon in 1947.

This week Buckingham Palace announced plans for a service of thanksgiving for the life of Prince Philip, to be held at Westminster Abbey in the spring.

It was really quite touching and a departure from the normal Christmas broadcast, which is typically a reflection on the year.

This broadcast was very personal and one got an impression of the keen sense of loss that she clearly feels for the man who was her husband for 73 years.

There's very little mention of Covid, just a passing reference that it has once again disrupted Christmas plans - including the Queen's.

She had planned to go to Sandringham, her Norfolk estate, but she has stayed at Windsor and been joined by six members of her family today, including the Prince of Wales and the Duchess of Cornwall.

This Christmas broadcast is the first time we've had a chance to see the Queen face to face - nine weeks after she cancelled her trip to Northern Ireland for health reasons.

Next year will be significant for the Queen and for the monarchy, because it will be her Platinum Jubilee, marking 70 years since she acceded to the throne in February 1952.

After another year of uncertainty with the pandemic, the Queen spoke of the reassuring comfort of family traditions, such as "watching a favourite film where we already know the ending".

Royal aides declined to say what such a favourite film might be - although her grandson Prince William recently pointed to Elf as one of his seasonal favourites.

The speech highlighted the importance of "passing the baton" to the next generation, in a year when the 95-year-old monarch has had her own health problems.

The Christmas broadcast, recorded in Windsor Castle, was the Queen's most extensive appearance since having to withdraw from a series of events during the autumn. 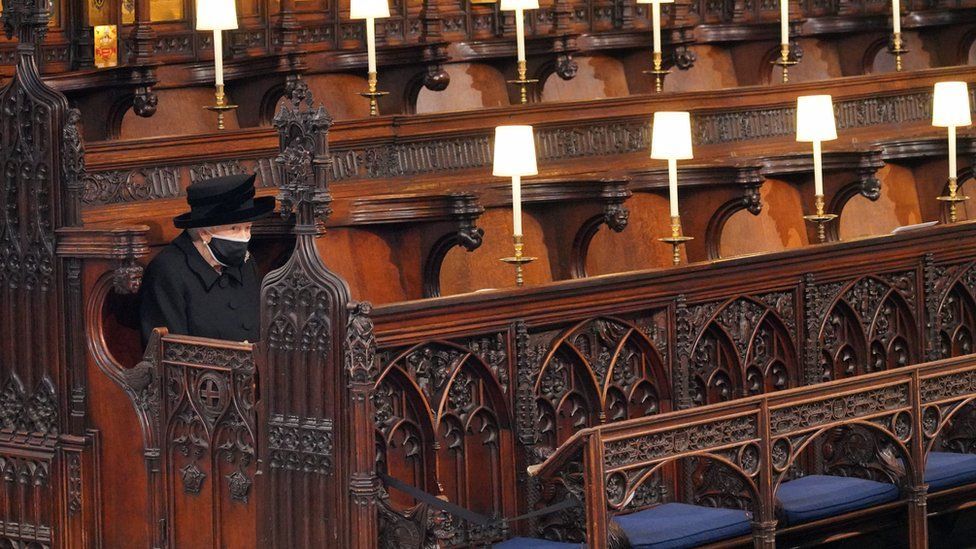 The Queen at the funeral of her husband Prince Philip, observing pandemic restrictions at the time

The Queen praised the work of Prince Charles and Prince William at the COP26 climate change summit and their commitment to the "stewardship of the environment".

She looked ahead to the Platinum Jubilee next year, marking 70 years of her reign, which she hoped would bring a "sense of togetherness" and a chance to take stock of the "enormous changes" over those decades.

The broadcast included a community choir, called Singology, that helped to bring people together during the pandemic.

There were glimpses of the royal family at events during the year, but there were no mentions of Prince Andrew, Prince Harry or Meghan, Duchess of Sussex.

As a precaution against rising levels of the Omicron variant, the Queen is staying in Windsor Castle, rather than spending Christmas as usual on her Sandringham estate.

Members of her family have been with her on Christmas day, including the Prince of Wales and the Duchess of Cornwall.

Earlier, a 19-year-old man armed with an "offensive weapon" was arrested in the grounds of Windsor Castle, police said.

Thames Valley Police said the man, who is from Southampton, was found within "moments" of entering the grounds at 08:30 GMT.

He was arrested on suspicion of breach or trespass of a protected site and possession of an offensive weapon. The force said he did not enter any buildings and members of the Royal Family had been informed.

At Sandringham, the Queen would usually have attended a Christmas morning local church service - and in her message the Queen spoke of the "bedrock of my faith".

For a year of such personal and public upheavals, she quoted the Christmas carol, O Little Town of Bethlehem, with the lines: "The hopes and fears of all the years are met in thee tonight." 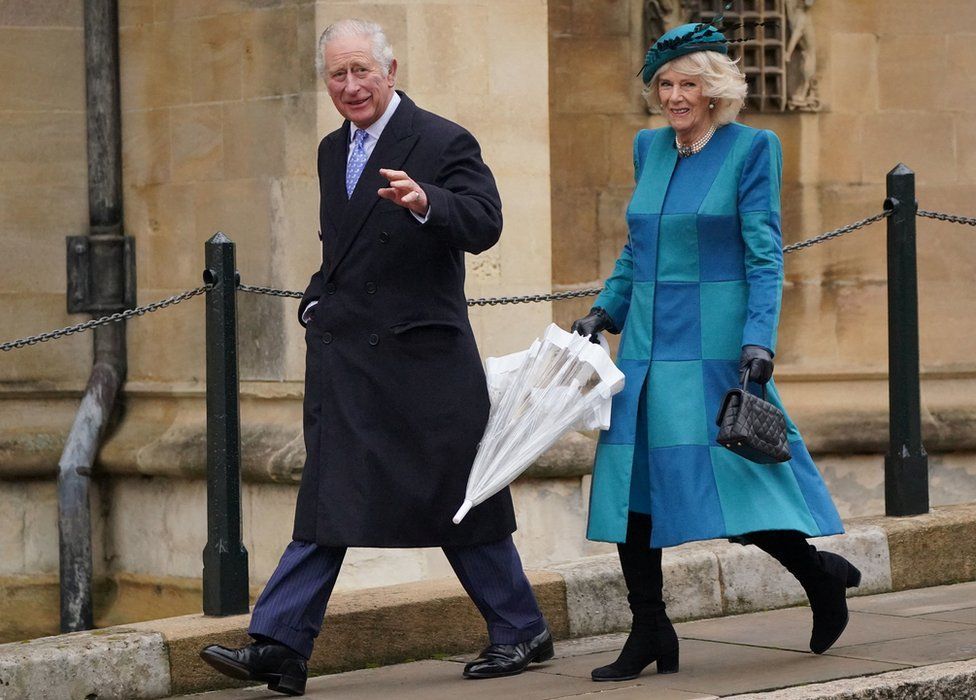 Many members of the Royal Family attended a morning church service at St George's Chapel in Windsor.

Charles and Camilla went to the Christmas Matins service ahead of spending the day with the Queen.

The couple were joined at the chapel in the grounds of Windsor Castle by the Earl and Countess of Wessex and the Duke and Duchess of Gloucester.

It is understood the Queen's absence from the service is a personal choice and follows a precautionary approach seen over the last six months amid rising coronavirus cases.

Meanwhile, the Duke and Duchess of Cambridge tweeted that this Christmas would be different to what so many people had planned.

Prince William and Kate wrote: "From those who are alone or having to isolate away from loved ones, to the incredible people supporting our NHS and caring for those most in need - we are thinking of you."

The duchess also surprised an audience at a community carol concert as she took to the piano alongside musician Tom Walker. The service, which was held at Westminster Abbey, was broadcast last night on ITV.

Catherine was joined at the service by Prince William and other members of the Royal Family including Zara and Mike Tindall, Sophie Wessex, and Princess Beatrice and her husband Edoardo Mapelli Mozzi. 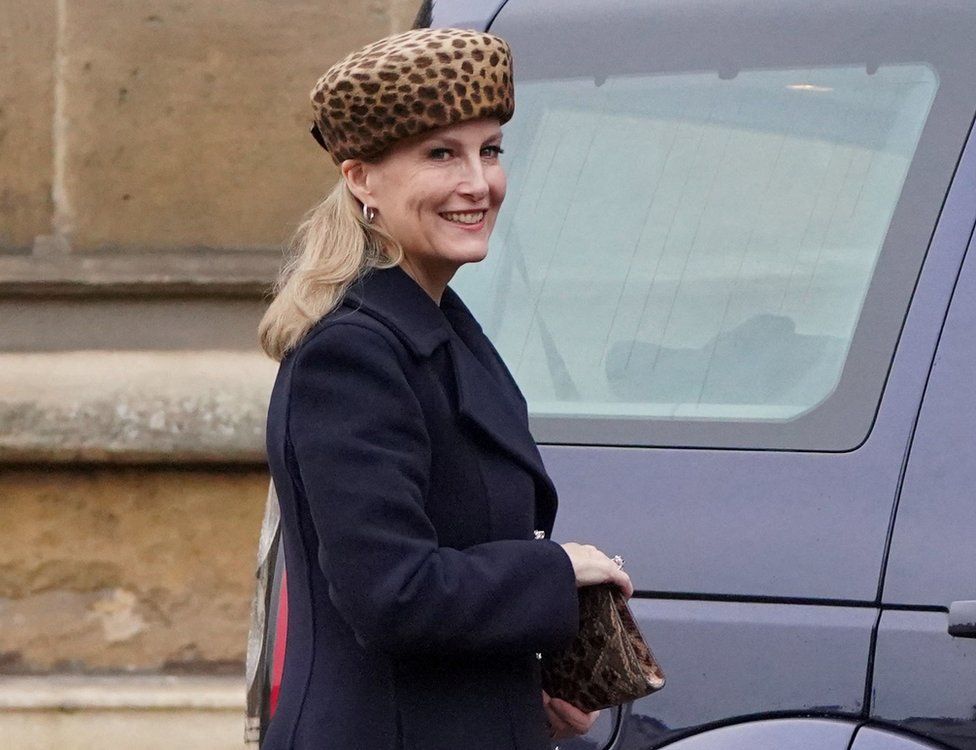