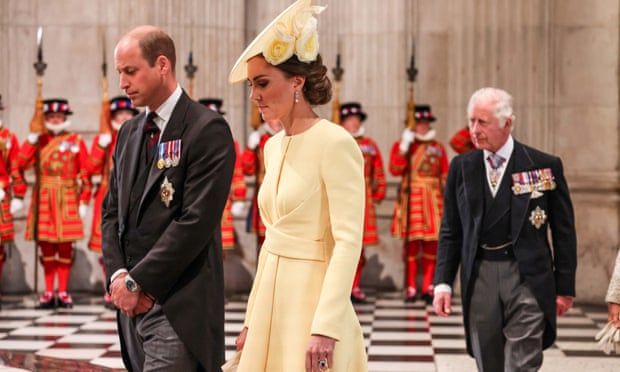 The symbolism of a great state service of thanksgiving for an absent Queen was not lost beneath the imposing dome of St Paul’s Cathedral. All the more so as the country was paying tribute to her seven decades of public service as Britain’s now longest-reigning monarch.

The Prince of Wales was in her stead for the formal procession through a 2,000-strong congregation of prime ministers past and present, parliamentarians, diplomats, a full squad of other royals and 400 members of the public honoured for their community work.

As the archbishop of York, Stephen Cottrell, said in his hastily rewritten sermon, the horse-loving Queen, 96, is “still in the saddle”. But it seemed a moment to recognise that her presence, taken for granted at such grand public events, is no longer guaranteed due to the mobility problems that have plagued her platinum jubilee year.

The Duke and Duchess of Sussex, who had flown in at the Queen’s invitation, made their first public appearance with other members of the royal family since their exit from royal duties and relocation to California two years ago. 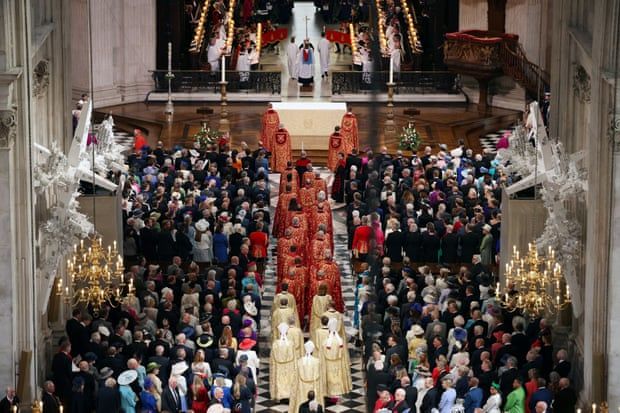 A 2,000-strong congregation gathered for the ceremony at St Paul’s.

Necks craned as the couple walked to their seats, smiling and hand in hand, having arrived to cheers – and some jeers –from the crowd outside. They arrived by car shortly after the long line of other assorted royals who earlier had disgorged from a coach to file into the cathedral.

The prime minister, Boris Johnson, read from the New Testament. As he and his wife, Carrie, had arrived at the cathedral, loud boos, followed by some cheers, could be heard from onlookers outside.

Seeing Charles in his mother’s seat was as palpable an image of the quiet transition ongoing behind palace walls as when he read the Queen’s speech at the state opening of parliament.

Harry, in morning dress, wore his medals, including a commemorative platinum jubilee medal, apparently distributed throughout working and non-working royals and funded privately.

Harry and Meghan departed hand in hand too and were seen chatting easily to relatives such as Harry’s cousin Zara Tindall and her brother Peter Phillips.

If Thursday’s trooping the colour and Sunday’s jubilee pageant provide the spectacle, then this procession at St Paul’s, a cathedral to national celebration and commemoration, was the spiritual heart of the jubilee, as it has been for jubilees as far back as George III.

The Queen may have been watching it on TV, many miles away at Windsor Castle, but the rest of the family were out in force.

But for lip-readers and body-language experts hired to mine any morsels on the relations between Harry and Charles, said not to have been enhanced by the accusations of racism and indifference the couple have made in US TV interviews, there was little to go on.

Indicative of their new, more minor position within the royal family, the Sussexes were seated a row behind and on the other side of the aisle from William and Kate, and Charles and Camilla. It did not appear they interacted much throughout the service, though that would have been difficult given the physical distance between them.

Nor did Harry and Meghan join other royals and dignitaries at a Guildhall reception immediately after the service. Instead the couple were seen returning to Frogmore Cottage, their Windsor home.

This was a service of deputies, Charles deputising for his mother, the archbishop of York called upon to deliver the sermon in place of the archbishop of Canterbury, Justin Welby, indisposed through Covid. The Duke of York, also due to be present, was also absent after testing positive. Shortly after the service it was announced that the Queen would not attend the Epsom Derby on Saturday. Princess Anne is expected to go in her place.

Cottrell had earlier described his last-minute gig as “slightly terrifying”. He would have hastily redrafted after the announcement on the eve of the service that the Queen would miss it, having experienced “some discomfort” during trooping the colour.

He praised her as an example of “staunch constancy and a steadfast consistency; a faithfulness to God, an obedience to a vocation that is a bedrock of her life”. 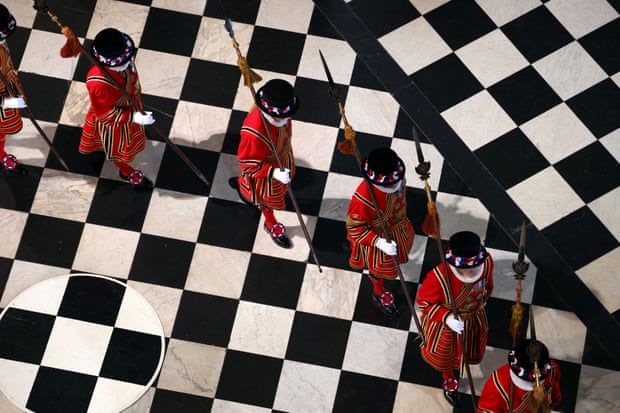 Yeomen warders, known as Beefeaters, march at the thanksgiving service.

Drawing on her well-documented love of horse racing, he told the congregation that “her long reign reflects the distance of Aintree more than the sprints of Epsom. Certainly, less dressage than most people imagine.”

He said: “Your Majesty, we’re sorry you’re not with us this morning in person, but you are still in the saddle. And we are all glad that there is still more to come. So, thank you for staying the course.” His words were greeted by smiles and nods from the royals present.

Other attenders included cabinet ministers, the Labour leader, Sir Keir Starmer, former prime ministers, and the first ministers of Scotland and Wales. Key workers, charity volunteers and members of the armed forces were invited in recognition of their contributions to public life.

One of the country’s largest bells, the Great Paul, was rung before the service and after, for the first time on a royal occasion.

After the service, as the congregation filed down the steps of St Paul’s, they passed the spot marking another queen’s absence from her own service. A 78-year-old Queen Victoria was too frail to attend the grand state service for her diamond jubilee inside the building in 1897, so a short second service was conducted on the steps outside while she sat in her carriage.