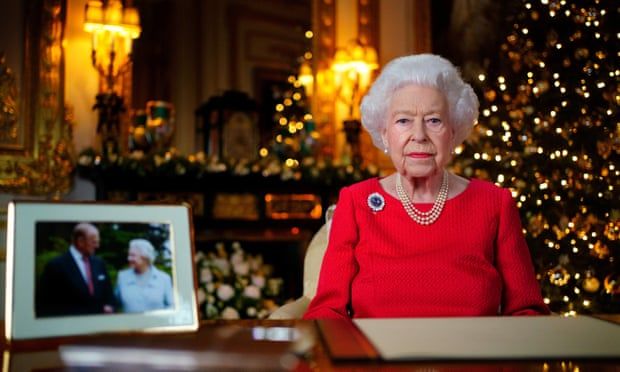 Photograph of TV address released by palace shows Queen sitting next to a portrait of her and Prince Philip
The Queen’s Christmas Day message is expected to be a particularly personal one this year, her first since the death of the Duke of Edinburgh.

A photograph, which was released by Buckingham Palace ahead of her televised address, shows the Queen sitting behind a desk in the White Drawing Room at Windsor Castle, accompanied by a single, framed picture of the couple taken in 2007 at Broadlands country house, Hampshire, to mark their diamond wedding anniversary.

The handout from the palace shows the monarch wearing an embossed wool shift dress in Christmas red, by the British designer Angela Kelly, as well as a sapphire chrysanthemum brooch the then Princess Elizabeth wore for a photocall on her honeymoon, also to Broadlands, in 1947, and for the couple’s diamond wedding celebrations.

This year’s message follows the death of the duke in April aged 99. Coronavirus restrictions at the time meant the Queen was memorably and poignantly forced to sit alone in St George’s Chapel for his funeral service.

Clarence House has confirmed the Queen will spend Christmas Day with the Prince of Wales and the Duchess of Cornwall. The monarch had said she would remain in Windsor for Christmas amid the rapid spread of the Omicron Covid variant.

The Queen normally hosts her large family at Sandringham in Norfolk, where they are usually watched by crowds as they attend church on 25 December, although Covid meant this did not happen last year.

The Queen cancelled a traditional pre-Christmas lunch with her extended family, which had been scheduled for Tuesday.

Buckingham Palace announced on Thursday a service of thanksgiving for the life of the Duke of Edinburgh would take place in spring 2022 at Westminster Abbey.

The Queen’s speech will mark the closing of an eventful year for the royals, which included the Duke and Duchess of Sussex’s bombshell interview with Oprah Winfrey in which they accused an unnamed royal of racism, as well as making other allegations about the institution.

The royals also had to contend with allegations from Virginia Giuffre, who started legal action against the Duke of York for allegedly sexually assaulting her when she was a teenager. Prince Andrew has repeatedly denied all claims.

The Queen’s address will be broadcast across multiple channels at 3pm on Christmas Day.
#Coronavirus  #Covid
Add Comment