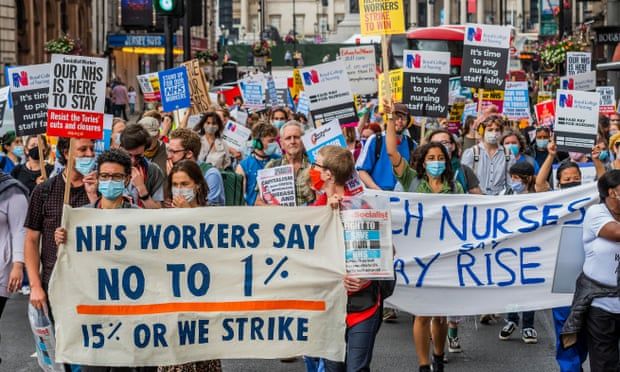 Protests call for end to NHS underfunding and understaffing

Dozens of protests have called for an end to underfunding and understaffing in the NHS across England, Scotland and Wales to mark the health service’s 73rd anniversary.

Campaigners from Keep Our NHS Public said they wanted an end to health service privatisation, better pay and to highlight threats to patient safety due to working conditions.

Outside University College Hospital in London on Saturday, NHS health workers and activists chanted: “Boris Johnson hear us shout, pay us properly or get out”. They also begged for the NHS to be kept alive, as it continues to face structural reforms that many say damage efficiency and see some services in effect privatised. 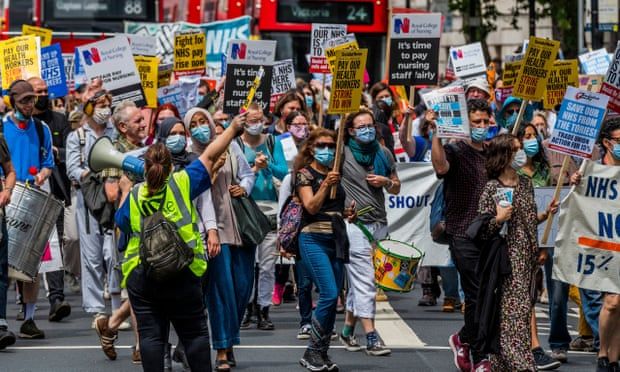 NHS protest for NHS pay justice, on its 73rd birthday on Saturday.

Nearby, a critical care nurse said NHS staff had been so “battered” by the pandemic that “a lot of us are still carrying scars … We’ve seen things we shouldn’t see and its broken a lot of our nurses”, Dave Carr, also a Unite representative, told Sky News.

“The NHS is in an existential crisis. We love the fact we are trusted by the British public to look after their sick [relatives]. So I want them to trust us now when we say if we don’t get a pay rise we are going to continue to haemorrhage nursing staff. Patient safety is already compromised; our NHS is crumbling and around the edges the vultures are privatising lumps of it. It’s on a knife-edge.”

There was anger in March when the former health secretary Matt Hancock recommended a 1% increase for nurses and doctors in consideration of what he said was “what’s affordable as a nation”.

On Friday, the British Medical Association said it planned to ask members about taking industrial action and halting paid and unpaid overtime if the government’s pay offer was not closer to 4%, after years of real terms cuts. The Royal College of Nursing also said it was considering balloting for action over the “slap in the face” pay offer.

Before the protests, co-chair of Keep Our NHS Public Dr Tony O’Sullivan, said the founding principles of the NHS, to institute universal free healthcare, were undermined by government underfunding of the NHS, while “giving priority” to investment with private health companies.

“The weakened NHS has been stretched to breaking point by Covid and the population has suffered,” he said. “Staff are underpaid, overworked and their health put in danger. The new health bill threatens further large scale private contracting.”

Holly Turner, an NHS nurse and founding member of campaign group NHS Workers Say No, said: “I have been dealt over a decade of real terms cuts to my pay despite my workload only continuing to increase. Staff have been victims of avoidable deaths and illness while crony contracts and profit has been placed above workers’ safety. We are struggling to keep our patients safe due to chronic understaffing and unmanageable waiting lists.”

John McDonnell, former Labour shadow chancellor, told a rally outside Downing Street: “We’ve all known people who have been lost in the NHS as a result of this, in my local hospital we lost one of the matrons in the early stages of the pandemic. We cannot let their lives be in vain; they gave their lives to save their patients … We’ve got to ensure in honour of them we save the NHS.”

Almost 800,000 people have signed a petition set up by a nurse from Merthyr Tydfil, Wales, which says the weekly national rounds of applause, broadcast with images of ministers clapping, is “a nice gesture” but that what they most want is for NHS workers to be given a 15% pay rise.

The protests come as the NHS turns 73. More than 70 landmarks across England will be lit up in blue on Saturday to thank staff for their work during the pandemic and commemorate the hundreds of NHS workers who died in relation to Covid.

The NHS chief people officer, Prerana Issar, said: “Each of the colleagues who sadly died while caring for and protecting patients represents an irreplaceable gap in a family and a workplace.

“It is no exaggeration to say that health service staff have helped to keep the country going during the pandemic, and while NHS staff have rightly been celebrated for their contribution, we know that the role played by other key workers – people keeping supermarkets open, refuse collectors, childcarers and other public services – as well as the resilience of the general public, has helped ensure we can start to move forward.”