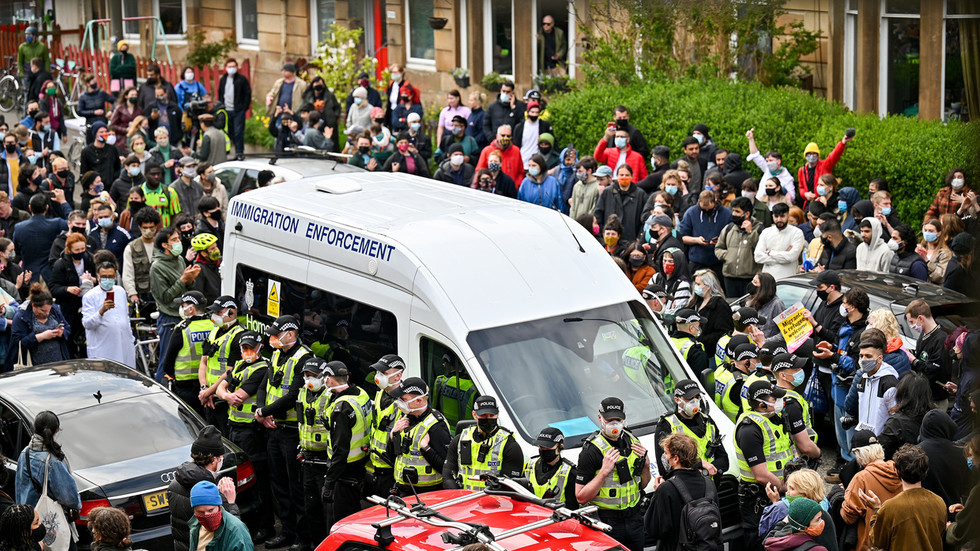 Two men detained by immigration officers in Scotland have been released from a police van to huge cheers from a 100-strong crowd who amassed around the vehicle to prevent the pair being taken away from their home in Glasgow.

An hours-long standoff between activists and dozens of police had ensued in Kenmure Street in southern Glasgow from Thursday morning, after two immigrants were taken from a flat there by immigration officers.

Police were filmed trying to remove protesters, many of whom sat in the road to stop the UK Home Office van moving, while one man even maneuvered himself underneath the vehicle.

The Home Office action was widely condemned, including by Scottish First Minister Nicola Sturgeon, who said she was “deeply concerned” by the scenes.

Later in the day, Police Scotland said in a statement that Chief Superintendent Mark Sutherland had decided to release the two men “back into their community” in order to “protect the safety, public health and wellbeing” of all those involved in both the detention and the protest.

Videos from Kenmure Street on Thursday afternoon showed the men being released from the back of the van by officers to cheers and applause from the surrounding crowd.

Later footage then appeared to show them being escorted to a local mosque by crowds who chanted “refugees are welcome here.”

The men’s lawyer, Aamer Anwar, said an agreement for their release had been struck between the UK Home Office and the Scottish First Minister and Justice Secretary.

In a speech from Kenmure Street, he told the crowd the Home Office had agreed the pair could be released into his custody at the mosque, and that they would not be arrested or be subject to any further action.

Scotland’s Justice Secretary Humza Yousaf said he was “angry and disgusted” at the Home Office’s action in the Muslim community on the day of Eid, saying it looked like it was “intended to provoke.”

He added that he was “pleased” Police Scotland had decided to release the men, but said the UK government’s “hostile environment” immigration policy was “not welcome in Scotland.”