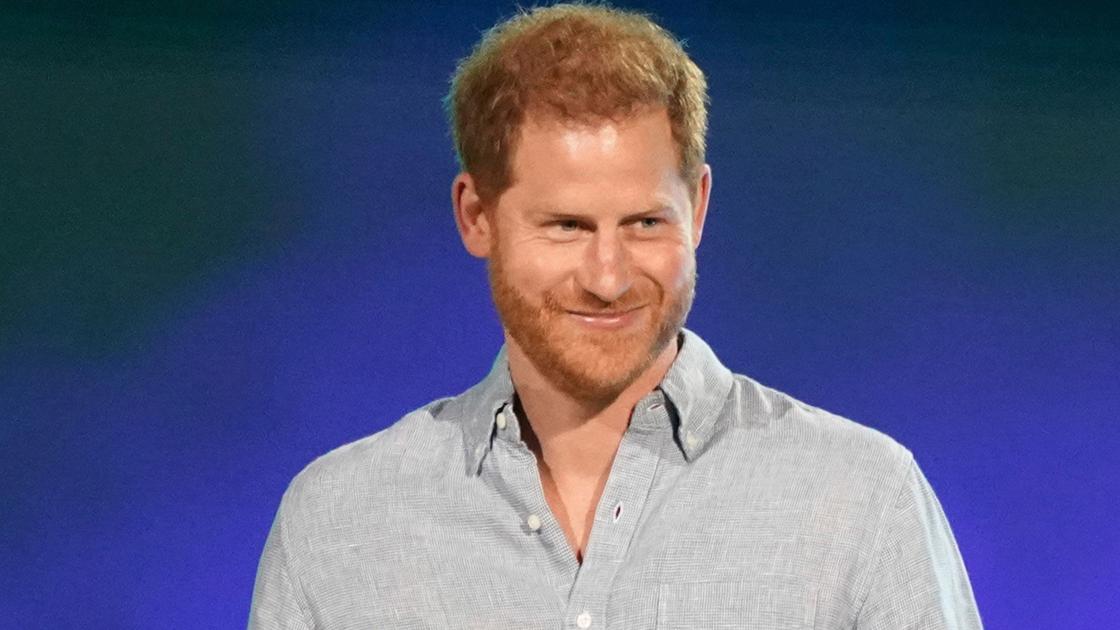 Prince Harry thought about quitting royal life in his 20s

Prince Harry compared his royal experience to "living in a zoo," saying in a podcast he contemplated quitting royal life several times while in his 20s.

Prince Harry compared his royal experience to being on "The Truman Show" and "living in a zoo."

The Duke of Sussex said during a Thursday episode of the "Armchair Expert" podcast that he contemplated quitting royal life on several occasions while in his 20s. He spoke candidly with host Dax Shepard about keeping his relationship with Meghan a secret and dealing with the U.K. media scrutiny.

Harry thought his life was like the 1998 Jim Carrey film "The Truman Show." The film tells a story about Truman Burbank's life being televised through hidden cameras while encountering people who were hired actors.

Harry said it was a heavy burden and he struggled to deal with being a member of the royal family. He feared that his pregnant wife and son, Archie, would have to deal with the spotlight the same way his late mother, Princess Diana, had to deal with the enormous attention.

In 1997, Diana died in a car crash at the age of 36 in Paris while being pursued by paparazzi.

In a previous interview, Harry said the royal family cut him off financially at the start of 2020 after he announced plans to step back from his roles. But he was able to afford security for his family because of the money his mother left behind.

Harry and Meghan's departure from royal duties began last year over what they described as the British media's intrusions and racist attitudes toward the duchess. He criticized some American media outlets but said they are an improvement over the ones in the U.K.

He feels more liberated after he and his family moved to California.

"Living here now I can actually lift my head and actually feel different," said Harry, who added he's able to take Archie for bicycle rides. "You can walk around feeling a little bit more free."

Photos: Harry and Meghan through the years 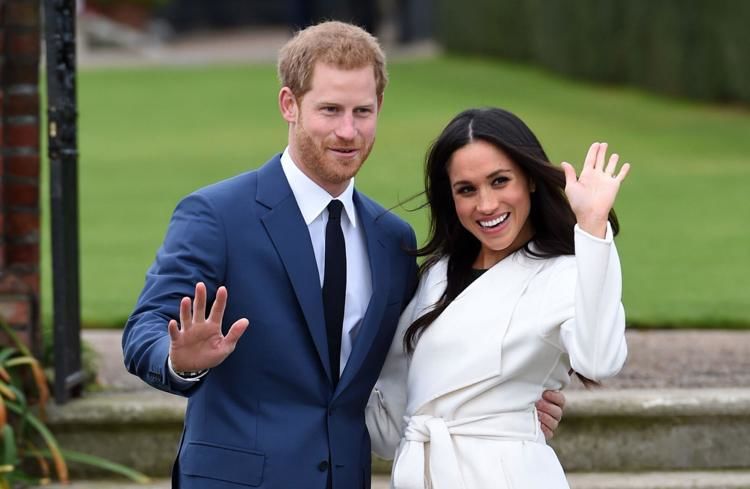 Britain's Prince Harry and Meghan Markle pose for the media in the grounds of Kensington Palace in London, Monday Nov. 27, 2017. It was announced Monday that Prince Harry, fifth in line for the British throne, will marry American actress Meghan Markle in the spring, confirming months of rumors. 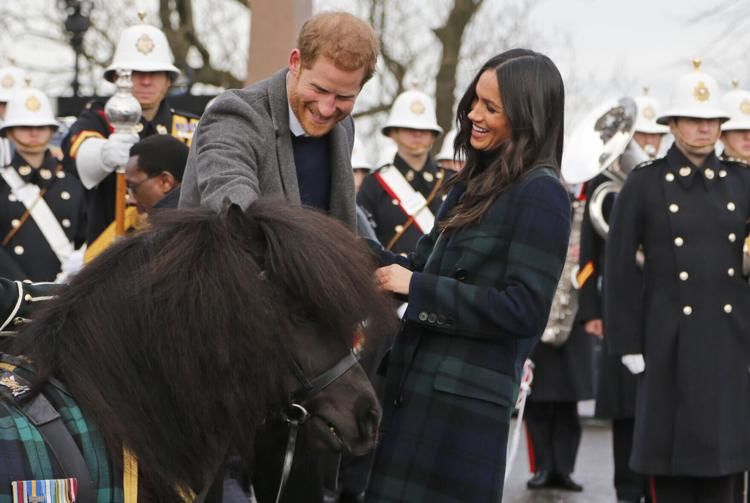 Britain's Prince Harry and his fiancee Meghan Markle meet a Shetland Pony as they arrive at Edinburgh Castle in Edinburgh, Scotland, Tuesday, Feb. 13, 2018. The recently engaged couple are on a one day tour to Edinburgh, and will visit the Castle and observe the firing of the One O'clock Gun. 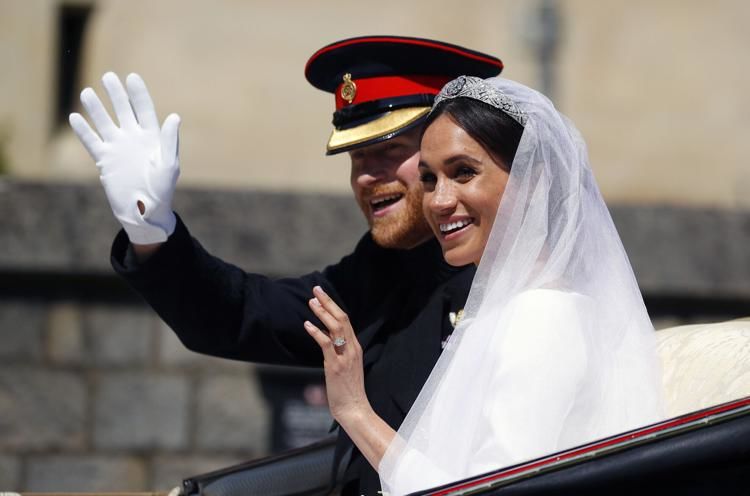 Britain's Prince Harry and his wife Meghan Markle ride a horse-drawn carriage, after their wedding ceremony at St. George's Chapel in Windsor Castle in Windsor, near London, England, Saturday, May 19, 2018. 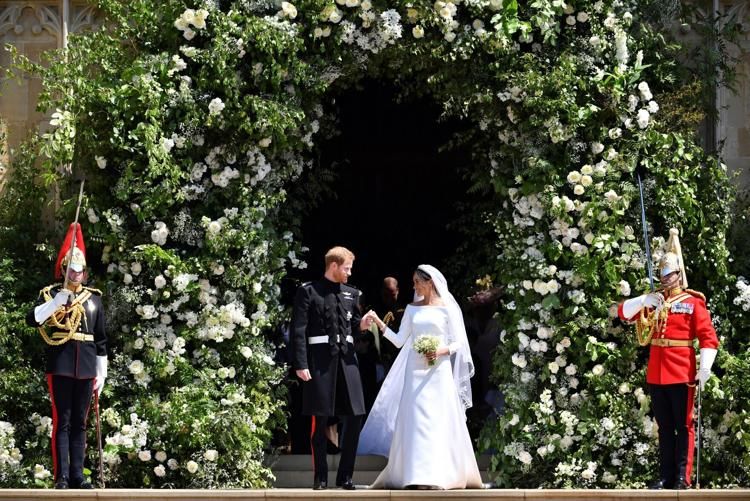 Prince Harry and Meghan Markle leave after their wedding ceremony at St. George's Chapel in Windsor Castle in Windsor, near London, England, Saturday, May 19, 2018. 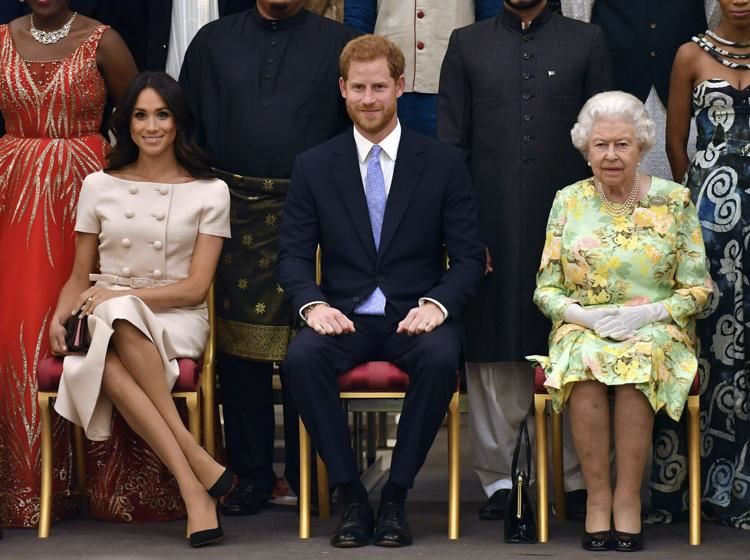 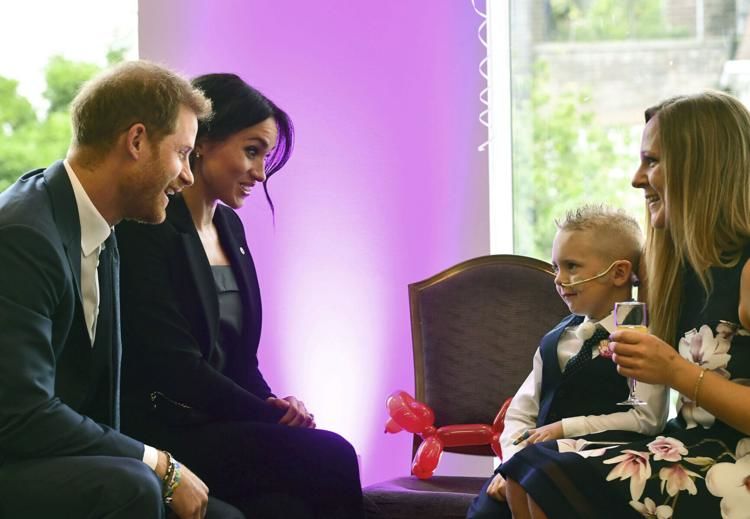 Britian's Prince Harry, the patron of the charity WellChild and his wife Meghan, the Duchess of Sussex meet four-year-old Mckenzie Brackley and his mother, during the annual WellChild Awards at the Royal Lancaster Hotel in London, Tuesday, Sept. 4, 2018. The couple attended the annual WellChild awards Tuesday for the charity, who help to get seriously ill children and young people out of hospital and home to their families. 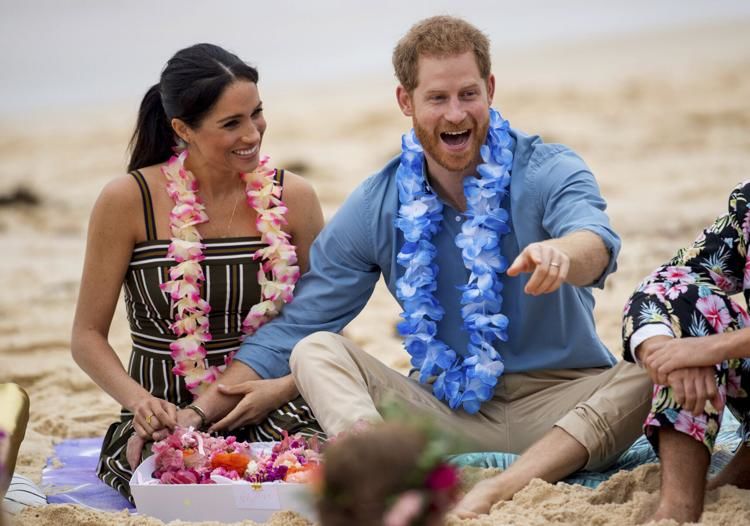 Britain's Prince Harry and Meghan, Duchess of Sussex meet with a local surfing community group, known as OneWave, raising awareness for mental health and wellbeing in a fun and engaging way at Bondi Beach in Sydney, Australia, Friday, Oct. 19, 2018. Prince Harry and his wife Meghan are on day four of their 16-day tour of Australia and the South Pacific. 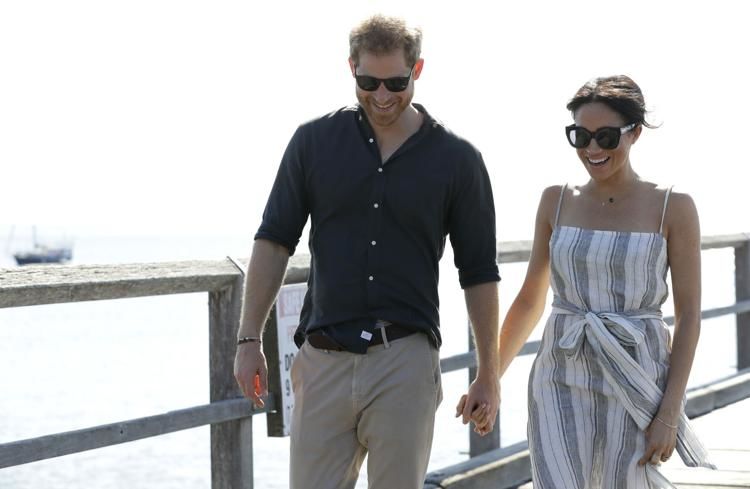 Britain's Prince Harry, left, and Meghan, Duchess of Sussex walk along Kingfisher Bay Jetty during a visit to Fraser Island, Australia, Monday, Oct. 22, 2018. Prince Harry and his wife Meghan are on day seven of their 16-day tour of Australia and the South Pacific. 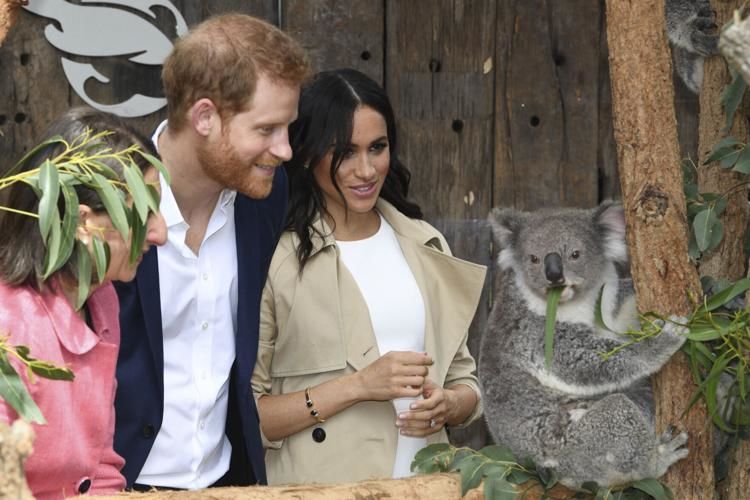 Britain's Prince Harry and Meghan, Duchess of Sussex meet Ruby a mother Koala who gave birth to koala joey Meghan, named after Her Royal Highness, with a second joey named Harry after His Royal Highness during a visit to Taronga Zoo in Sydney, Australia, Tuesday, Oct. 16, 2018. Prince Harry and his wife Meghan are on a 16-day tour of Australia and the South Pacific. 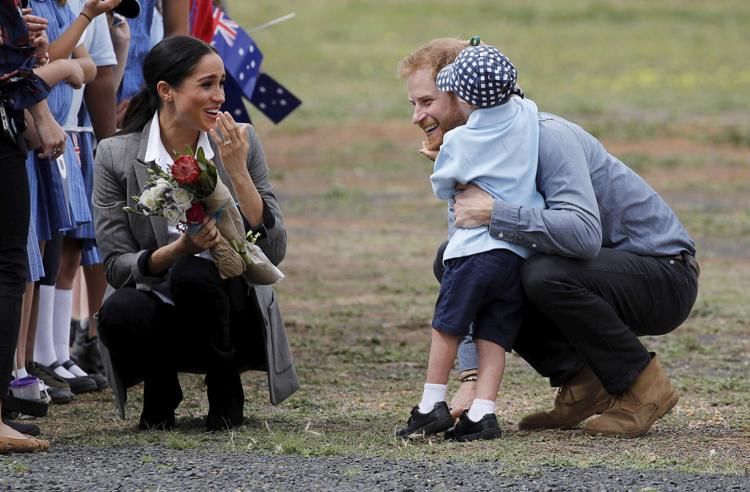 Britain's Prince Harry and Meghan, Duchess of Sussex are embraced by Luke Vincent, 5, on their arrival in Dubbo, Australia, Wednesday, Oct. 17, 2018. Prince Harry and his wife Meghan are on day two of their 16-day tour of Australia and the South Pacific. 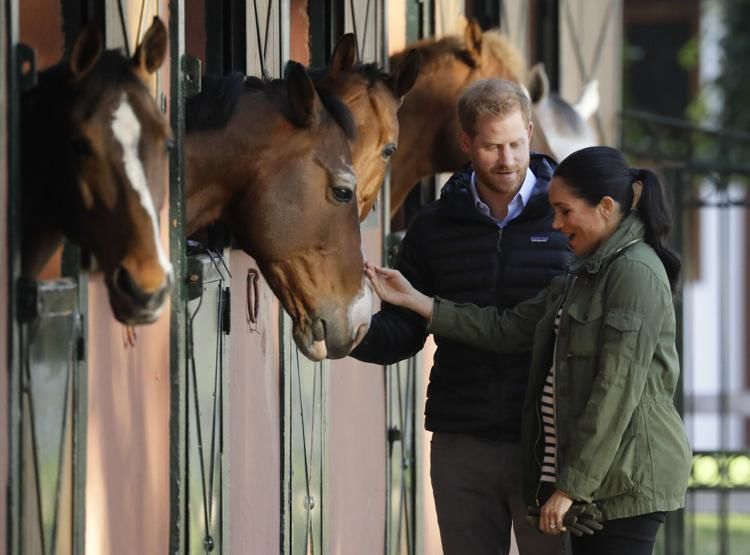 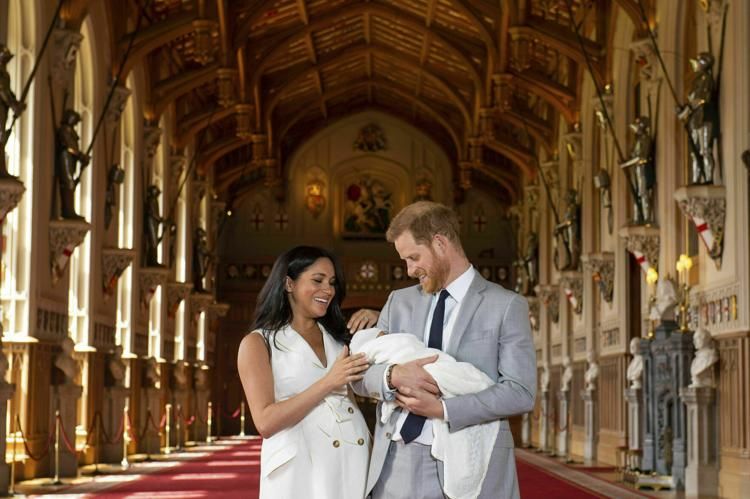 Britain's Prince Harry and Meghan, Duchess of Sussex, during a photocall with their newborn son, in St George's Hall at Windsor Castle, Windsor, south England, Wednesday May 8, 2019. 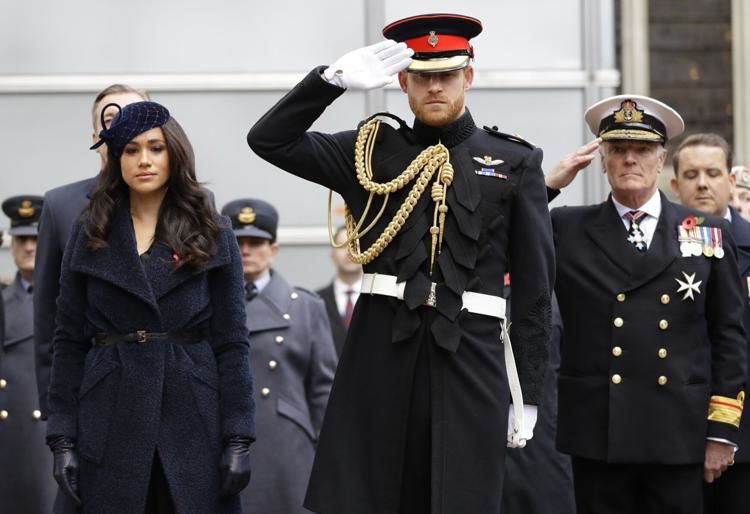 Britain's Prince Harry and Meghan, the Duchess of Sussex attend the 91st Field of Remembrance at Westminster Abbey in London, Thursday, Nov. 7, 2019. 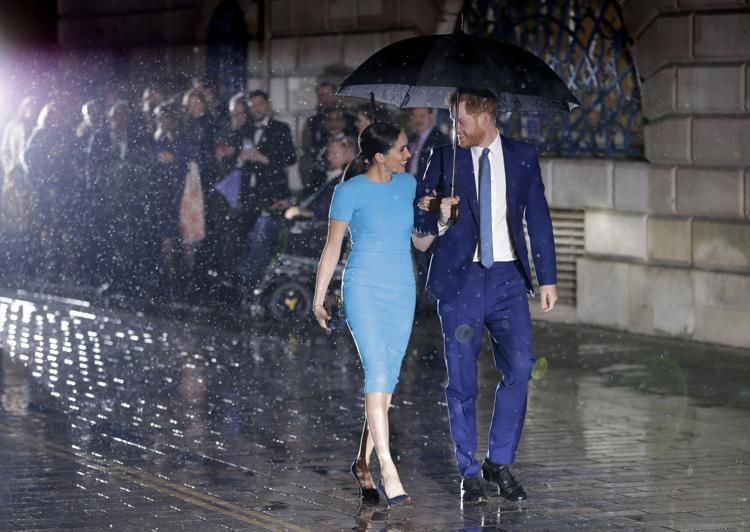 Britain's Prince Harry and Meghan, the Duke and Duchess of Sussex arrive at the annual Endeavour Fund Awards in London, Thursday, March 5, 2020. The awards celebrate the achievements of service personnel who were injured in service and have gone on to use sport as part of their recovery and rehabilitation.