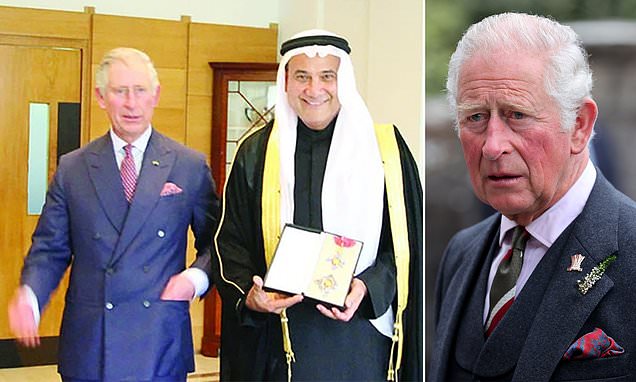 The Mail on Sunday can reveal that Prince Charles found time between official engagements to pose for photographs with Mohammed Abdul Latif Jameel at an investiture ceremony in 2015.

The Prince of Wales personally handed an honorary knighthood to a billionaire Saudi supporter of his charity during a taxpayer-funded trip to the Middle East.

The Mail on Sunday can reveal that Prince Charles found time between a blizzard of official engagements to pose for photographs with a beaming Mohammed Abdul Latif Jameel at an investiture ceremony on February 10, 2015.

But the event at the British Embassy in Riyadh was not mentioned in the 774-word Court Circular descriptions of the future King’s activities during his six-day official tour on behalf of the Government. Pictures of the investiture emerged only when Mr Jameel posted them on his personal website. 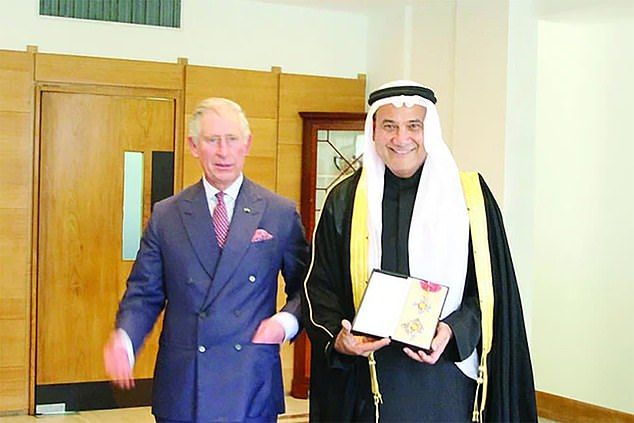 The Mail on Sunday can reveal that Prince Charles found time between a blizzard of official engagements to pose for photographs with a beaming Mohammed Abdul Latif Jameel at an investiture ceremony on February 10, 2015

One of Saudi Arabia’s richest men, Mr Jameel, 66, is a longstanding supporter of Dumfries House, the 18th Century Palladian mansion in Scotland saved for the nation by Charles in 2007. He is also a trustee of the Prince’s School of Traditional Arts and an ambassador of The Prince’s Foundation.

A spokesman for the billionaire last night insisted that he had never sought, or been offered, an honour from Charles or anyone linked to the Prince in return for a charitable donation.

Despite that, Norman Baker, an expert on Royal finances, urged Charles to ‘come clean’ and said he would be asking the Metropolitan Police to investigate the awarding of Mr Jameel’s knighthood.

The former Minister has already asked Met Commissioner Cressida Dick to investigate the circumstances around the award of an honour to another donor, Mahfouz Marei Mubarak bin Mahfouz, and the role played by Charles’s closest aide Michael Fawcett. 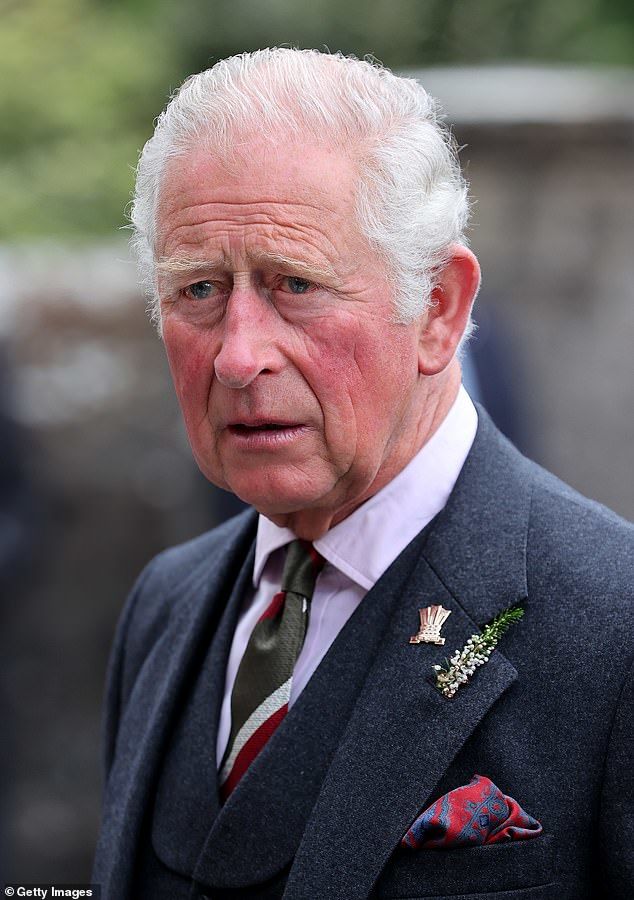 But the event at the British Embassy in Riyadh was not mentioned in the 774-word Court Circular descriptions of the future King’s activities during his six-day official tour on behalf of the Government, and came to light only when Mr Jameel posted pictures on his personal website

Mr Fawcett temporarily stepped down as chief executive of The Prince’s Foundation last weekend when The Mail on Sunday revealed a bombshell letter in which he offered to help secure a knighthood and citizenship for Dr Bin Mahfouz.

‘The smell of scandal is growing stronger,’ Mr Baker said. ‘I will be bringing this fresh case to the attention of the police. This is not the way the heir to the Throne should be behaving.’

The MoS can also reveal:

*  A third ‘fixer’ involved in a controversial £500,000 ‘cash for access’ donation to the Prince’s Foundation is a glamorous Belarusian called Volha Havorchanka;
*  Leaked emails show William Bortrick, the editor of Burke’s Peerage, knew about the same deal with banker Dmitry Leus – despite his previous denials;
*  Lord Brownlow, a Tory donor embroiled in a row over the refurbishment of Boris Johnson’s Downing Street flat, also ‘bailed out’ Charles’s struggling eco village at Dumfries House;
*  The Prince’s Foundation paid Mr Fawcett using a controversial arrangement that could have reduced their respective tax bills.

Mr Jameel has other connections with the Royal Family. Prince Andrew was photographed in 2011 frolicking in the sea off Corsica on his 150ft super-yacht. He also counts U2 frontman Bono among his friends, while his son, Hassan, dated pop star Rihanna for four years.

The billionaire forged his friendship with Charles 15 years ago through their shared love of art. Companies House records show that he has been involved with Charles’s charity since 2006, serving as director of the Prince’s School of Traditional Arts for 12 years until 2018.

According to his website, a third school in his Jameel House of Traditional Arts project is ‘currently under development on the estate of Dumfries House’.

Announcing the centre – which will cover almost five acres – in 2018, Simon Sadinsky, deputy executive director for education at The Prince’s Foundation, said: ‘Thanks to the generosity of Mohammed Jameel, this will be a remarkable facility.’

A spokesman for the billionaire said last night: ‘Mohammed Jameel has never at any time sought any honour. The award of a knighthood came as a total surprise to him.’

When the British Embassy in Riyadh publicly announced the honour, approved by the Queen, it noted Mr Jameel’s support for the arts, particularly the V&A Museum. There was no mention of donations to The Prince’s Foundation.

It is not normal practice to include such an investiture on the Court Circular and a Palace source pointed out that, far from being private, the award was made clear on a British Government website.

*  Dumfries House charity paid £311,000 to Michael Fawcett's hospitality company
*  Money was for his role as the charity's executive director and company services
*  Premier Mode was separately paid more than £300,000 by the charity

The charity pay packet of Prince Charles's closest aide was paid for three years into the former valet's catering company – avoiding the need to shell out on payroll taxes.

The Dumfries House charity paid £311,000 into Michael Fawcett's events hospitality company Premier Mode Ltd between 2015 and 2018, according to an analysis of its accounts.

The money was for his role as the charity's executive director and for services provided by his company. Premier Mode was separately paid more than £300,000 by the charity over the same period for organising events.

Ministers have launched a series of crackdowns on schemes in which bosses' salaries and fees are paid into private companies to reduce income tax and National Insurance payments.

The Prince's Foundation – the new name for the Dumfries House charity – may now face questions about why these funds were paid 'off payroll' to Mr Fawcett. There is no suggestion the arrangement was in breach of tax laws.

Graham Smith of Republic, which campaigns for the abolition of the monarchy, said: 'This looks like a questionable arrangement.

'We need to be told how much money was paid to this company, how much tax was paid and who made the decision to make these payments.'

The charity and Mr Fawcett declined to comment but a source said that the accounts were independently audited and published each year.