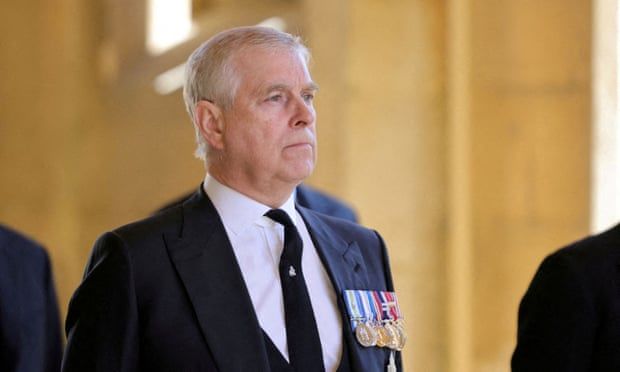 Prince is still able to step in for Queen and there are no plans to remove titles
Prince Andrew is to remain a counsellor of state, able to step in temporarily for the Queen, along with retaining his title Duke of York and military rank of vice admiral after settling his US sexual abuse civil lawsuit, it is understood.

There are no immediate plans to remove the titles, sources indicated, as calls for transparency over how the duke will fund the financial settlement with accuser Virginia Giuffre intensified along with those for him to relinquish his dukedom.

Andrew, 61, announced a “settlement in principle” with Giuffre, 38, on Tuesday in a joint statement which made no admission of liability over the allegations which he has always denied.

The agreement left him facing widespread opprobium, with international lawyers speculating that he had had to settle the case because of the weakness of his legal position.

Andrew was stripped of his royal patronages, honorary military titles and official use of his HRH style by the Queen last month in an attempt to distance the institution from the legal case.

The Guardian understands Andrew’s decision to settle out-of-court for an undisclosed sum, reportedly as high as £12m, has not altered the situation in relation to the titles he still holds.

Under legislation, he remains one of four counsellors of state who are required to step in should the sovereign be incapacitated through illness or absence abroad. The other three are Prince Charles, Prince William and Prince Harry.

Royal commentator Joe Little, of Majesty magazine, said: “This is a situation that needs resolving quickly. Recently, with William in Dubai, and Harry in the US, there was a distinct lack of counsellors of state. It needs to be resolved and ought to have been tackled before now.”

It is also understood there are no plans to remove his Duke of York title, bestowed on him by the Queen when he got married, but which York Central Labour MP, Rachael Maskell, has claimed had been “a source of deep hurt and embarrassment to many people across the city”.

He retains the title vice admiral because of his service in the Royal Navy. Plans to upgrade him to admiral on his 60th were delayed, and now appear shelved. Defence secretary, Ben Wallace, said “the decision on titles rests with the Palace”.

Buckingham Palace has declined to comment on reports the Queen will be contributing to the financial settlement from her private income, derived from the Duchy of Lancaster estate. Shadow secretary of state for Scotland, Ian Murray, told the BBC that transparency was needed about how the settlement will be funded if public money will be involved.

Royal finances expert David McClure said he felt strongly there was a “public right to know” about the “rough” size of the settlement, adding: “I don’t think this should be a state secret.”

He believed £5m was a more likely figure. He expected Andrew would “more than likely probably have to turn to the Queen” for assistance in paying.

In the joint statement on Tuesday, Andrew agreed to pay an undisclosed sum, as well as make a “substantial donation” to Giuffre’s charity for victims’ rights, and pledged to “demonstrate his regret for his association with Epstein” by supporting the “fight against the evils of sex trafficking and by supporting its victims”.

Labour MP Jess Phillips, shadow minister for domestic violence and safeguarding, said it would be very difficult for Andrew to play a constructive role in fighting sex trafficking in future.

“Those who work in sexual violence [and] human trafficking are certainly not going to have open arms to his allyship – even if it was just finances,” she told BBC Radio 4’s Woman’s Hour.

Andrew’s legal representative declined to comment on a Times report, that Giuffre will be able to speak publicly about her claim after the celebrations for the platinum jubilee are over.

Gloria Allred, a US attorney who has represented a number of Epstein’s victims, said the joint statement confirming the settlement was “vague” and would have been “carefully negotiated”.

She said Giuffre could testify in future court cases.

“No settlement such as this one can ever require that an accuser remain silent in the criminal justice system. A prosecutor could decide to file criminal charges, in which case, Virginia could testify if called on,” she told BBC Breakfast.
#Prince William
Add Comment