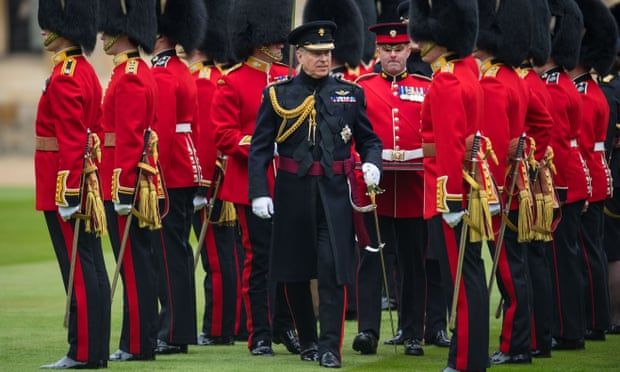 Prince Andrew loses military roles and use of HRH title

In a devastating blow to Prince Andrew, who was born His Royal Highness, Buckingham Palace also said he would no longer use the HRH royal style in any official capacity.

The move means Andrew has been completely removed from official royal life as he prepares to fight a civil lawsuit brought by Virginia Giuffre after a US judge rejected his attempt to have the case against him dismissed.

Norman Baker, a commentator on royal matters and a former government minister, said the prince had been “well and truly been chucked under the royal bus”, but the royal family “could not escape the immense damage” the case would do.

Buckingham Palace said in a statement on Thursday: “With the Queen’s approval and agreement, the Duke of York’s military affiliations and royal patronages have been returned to the Queen. The Duke of York will continue not to undertake any public duties and is defending this case as a private citizen.”

The Buckingham Palace statement does not say that the duke has been stripped of his HRH title, but that he will no longer use the style His Royal Highness in any official capacity.

The decision to take back the duke’s military affiliations and royal patronages had been widely discussed among senior members of the royal family, including the Prince of Wales and the Duke of Cambridge.

The duke’s roles have been handed back to the Queen with immediate effect for redistribution to other members of the royal family. Sources stressed that they would not be returned to Andrew.

As ninth in line to the throne, and the fourth-most senior adult in the line of succession, Andrew will remain as a counsellor of state, able to undertake official duties if the sovereign is temporarily incapacitated through illness or abroad.

The dramatic move came hours after more than 150 military veterans wrote to the Queen to ask her to strip Andrew of his honorary military roles amid what they described as their “upset and anger”. The palace had said earlier on Thursday that it had no comment on their open letter.

Writing to her in her capacity as head of state and commander-in-chief of the army, navy and air force, an open letter from former members of each of the services said that it was “untenable” for the Duke of York to retain his position.

“Were this any other senior military officer it is inconceivable that he would still be in post,” they say in the letter, sent the day after Lewis Kaplan, a Manhattan judge, rejected Prince Andrew’s efforts to dismiss Giuffre’s sexual assault lawsuit against him.

Andrew had indicated he intend to continue to contest the allegations against him. A source close to the duke said: “Given the robustness with which Judge Kaplan greeted our arguments, we are unsurprised by the ruling. However it was not a judgment on the merits of Ms Giuffre’s allegations. This is a marathon not a sprint and the duke will continue to defend himself against these claims”.

Giuffre, now 38, says she was forced into sex at 17 with the duke by associates of his, the late sex offender and financier, Jeffrey Epstein, and Ghislaine Maxwell, the British media heiress who was convicted in New York last month of sex-trafficking girls for Epstein. The duke denies the allegations against him.

It is understood the decision was taken by mutual agreement between the Queen and Andrew, but the ultimate decision would have fallen to the monarch.

As a former Royal Navy officer who served in the Falklands war, the loss of his association with the military units and regiments, the most prestigious being colonel of the Grenadier Guards, will be keenly felt by Andrew.

The palace had said previously that the duke’s military appointments were in abeyance after he stepped down from public duties in 2019.

But he still retained the roles, leaving eight British regiments, including the Grenadier Guards, where he had held the title of colonel, in limbo for more than two years.

Andrew was due to be promoted to admiral on his 60th birthday in 2020, but asked to defer this after stepping down from public duties. While his military affiliations – which are in the gift of the Queen – are returned, it is understood Andrew, as a former member of the armed services, will retain his current military rank of vice admiral.

The veterans said in their letter, which was partly coordinated by the campaign group Republic: “Officers of the British armed forces must adhere to the very highest standards of probity, honesty and honourable conduct.

“These are standards which Prince Andrew has fallen well short of. It is hard not to see, when senior officers are reportedly describing him as ‘toxic’, that he has brought the services he is associated with into disrepute.

“We are therefore asking that you take immediate steps to strip Prince Andrew of all his military ranks and titles and, if necessary, that he be dishonourably discharged.”

The letter concluded with a pointed and personal request to the Queen, who has long been reported to regard Andrew as her “favourite” son. It stated: “We understand that he is your son, but we write to you in your capacity as head of state and as commander-in-chief of the army, navy and air force. These steps could have been taken at any time in the past 11 years. Please do not leave it any longer.”

One of the veterans who signed the letter, Neil Kelly, a former corporal in the Army Intelligence Corps, told the Guardian after the Palace’s decision that he believed the letter had been a factor, but that the judge’s decision had also “clearly weighed heavily”.

“I heard the news at the same time as I was reading a piece in the Guardian saying the House of Windsor was looking for a way to distance themselves from Andrew, so I did get the impression that something could change.

“I didn’t immediately make the association with the letter but it must have been a contributory factor.”

Another veteran, Nicholas Alderton, who was a senior aircraftman in the RAF, said he was “very pleased” at the decision by the palace, adding: “I am a member of Republic anyway but having seen the coverage over the past couple of weeks and moths and the way in which Andrew seemed to be trying to hide behind the process, I really felt as an ex-serviceman that he was bringing things into disrepute.”