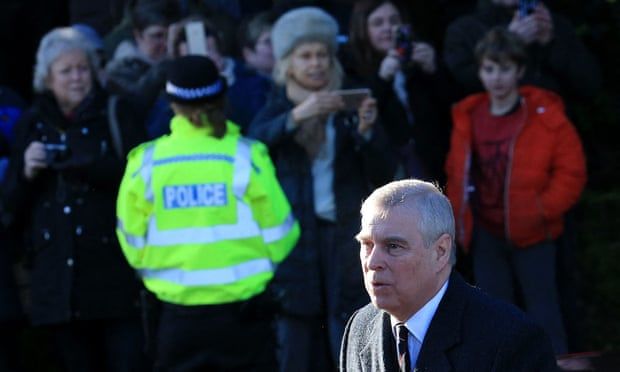 Prince Andrew faces calls to pay for his own security

The Duke of York faces calls to pay for his own security and relinquish his dukedom after being stripped of his military affiliations and royal patronages in the fallout over the civil sexual assault case against him.

The calls come as his accuser, Virginia Giuffre, welcomed the New York court ruling that paved the way for her lawsuit against Prince Andrew to proceed to trial, as she pledged to “continue to expose the truth”.

Prince Charles – who, with Prince William, was reportedly key to the Queen making her decision on Andrew’s future – ignored questions about his brother while on an engagement in Scotland.

With Andrew prevented from using his HRH style in any official capacity and banned from royal duties, calls were growing for him to lose his taxpayer-funded Scotland Yard security and his title Duke of York.

Rachael Maskell, the Labour MP for York Central, tweeted it was “untenable” for Andrew to cling on to his title “another day longer”, and Darryl Smalley, a senior member of City of York council, launched a campaign to strip Andrew of his dukedom.

The security minister, Damian Hinds, refused to confirm whether taxpayers would continue to fund Andrew’s security arrangements, telling LBC: “Our security forces, the police and others, do what they judge is necessary to protect our country, to protect people in it.” It was a “longstanding and I think correct principle that we don’t talk about who and how in particular”, he added.

Andrew has made clear he intends to continue to fight to clear his name over allegations made by Giuffre, 38, that she was forced into having sex with him when she was 17 and had been trafficked by the disgraced financier Jeffrey Epstein. He vehemently denies the allegations. A source close to the duke said on Thursday: “This is a marathon not a sprint and the duke will continue to defend himself against these claims.”

As a senior royal, he has round-the-clock Scotland Yard protection. Security costs are never discussed by Buckingham Palace or the Metropolitan police. But it has been reportedly estimated that the annual cost to the taxpayer of guarding Andrew could be up to £2m.

Graham Smith, of the campaign group Republic, questioned whether the taxpayer should fund security for any royals except the head of state. Of Andrew, he said: “Given that he’s no longer in any real sense a member of the royal household it does make sense he pays for his own security.”

The question of taxpayer-funded security for non-working royals was last raised when the Duke and Duchess of Sussex stepped down. When Harry and Meghan made public their decision early last year, their website suggested that the Home Office, through the Metropolitan police, should continue to provide protection for the couple and their young son, Archie. The Sussexes later signed multimillion-pound deals with Netflix and Spotify, with the duke telling Oprah Winfrey he had secured them to pay for his security.

The former Home Office minister and royal author Norman Baker said: “[Andrew] has, like Harry, kept his HRH even if he is not using it. But that means he still qualifies to spend public money and qualifies for security. He is no longer carrying out royal duties, so should have the HRH taken away along with his security.” Baker also called for him to have his dukedom revoked.

As Andrew faces mounting legal bills, it is not known if the Queen is assisting him with these privately. He receives an allowance from the Queen from her Duchy of Lancaster estate and may benefit from personal investments and bequests from family members. He also has a modest naval pension.

He lives in the grace-and-favour Royal Lodge at Windsor and is now in the process of selling a ski chalet he co-owns with his ex-wife, Sarah, Duchess of York. He sold his former marital home, Sunninghill Park near Windsor, which was a wedding gift from the Queen, in 2007 to the son-in-law of the former ruler of Kazakhstan for £15m, £3m over the asking price.

The duke’s daughters, Princesses Beatrice and Eugenie, received official protection until 2011 but now must foot the bill themselves.

Giuffre has praised Wednesday’s court ruling that rejected legal arguments by Andrew’s lawyer to have her case against him dismissed. She wrote on Twitter that she was pleased with the ruling, adding: “I’m glad I will have the chance to continue to expose the truth & I am deeply grateful to my extraordinary legal team.

“Their determination helps me seek justice from those who hurt me and so many others. My goal has always been to show that the rich and powerful are not above the law & must be held accountable.”