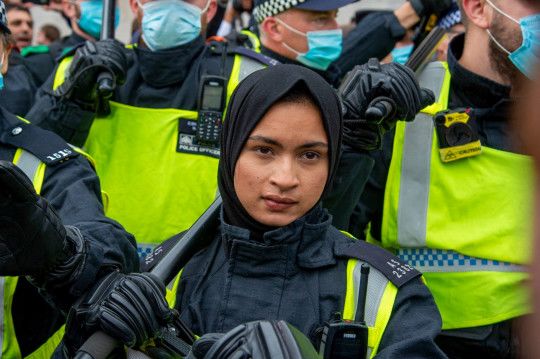 A Metropolitan Police officer praised for facing down anti-lockdown protestors is being investigated after allegedly posting a series of racist tweets.

Footage of Ruby Begum, 26, among colleagues on the front line during demonstrations last year went viral as she was hailed an ‘inspiration’.

But months before signing up to the force in 2016, Ms Begum allegedly posted on Twitter mocking the 9/11 terror attacks, according to the Mail on Sunday.

On the anniversary of the atrocity in 2014, she is said to have written: ‘Must be stupid if you think I’m gonna do 2 mins silence for 9/11’.

The Muslim police officer is accused of using the highly derogatory term ‘kuffar’ to describe non-believers.

She allegedly posted one tweet in July 2014 saying: ‘Kuffar lips have been all over my mug, there is no way I’m using that thing again.’

Ms Begum is also said to have made a series of anti-Semitic comments on her Twitter feed, which has now been deleted.

Scotland Yard has now launched a probe and referred the matter to the Independent Office for Police Conduct.

Ms Begum has now been placed on restricted duties while a ‘thorough’ investigation is carried out by the Met’s Directorate of Professional Standards.

It will consider whether the vetting process should or could have flagged up social media activity – and whether Ms Begum should have declared it.

The force said in a statement: ‘There is no place within the Met for any racist, homophobic or otherwise hateful attitudes and officers and staff can expect robust action should they be found to hold or express such views.

‘The information provided by the Mail on Sunday regarding a Police Constable’s social media posts is concerning and is being treated very seriously. 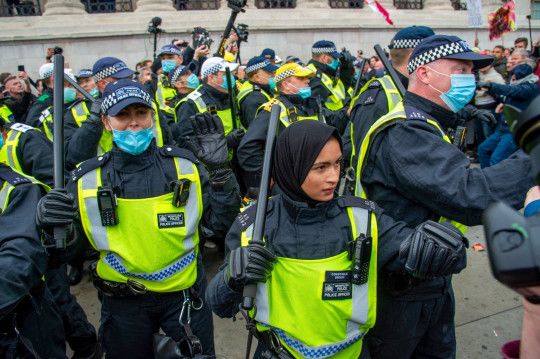 ‘On Friday, 6 August, immediately upon receipt of the information, the Met’s Directorate of Professional Standards (DPS) conducted a formal assessment and determined that a conduct matter should be recorded against the officer.

‘Following that assessment, the Met made a voluntary referral to the Independent Office for Police Conduct who determined that the matter should be investigated locally.

‘The Met’s DPS will now conduct a thorough investigation to establish the full circumstances behind the social media posts.

‘The officer, who is currently serving within the Taskforce, has been notified of the investigation and placed on restricted duties.

‘Whilst this process is at such an early stage we are unable to provide further comment.’ 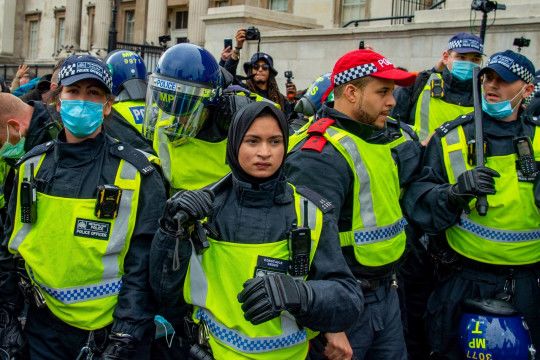 The IOPC has decided Miss Begum’s conduct should be investigated by the Met’s Directorate of Professional Standards.

A spokesperson told Metro.co.uk: ‘Having assessed the Metropolitan Police Service referral, we have decided the officer’s conduct should be investigated by the force’s professional standards department.

‘From the information provided, the majority of the conduct pre-dates the officer’s employment.

‘However, as part of our decision we have asked that the investigation consider whether the vetting process should or could have picked up the social media activity and whether the officer was obliged to have declared it.

‘We have also asked the MPS to consider re-referring the matter if any recent social media activity is found of the same or similar content.’