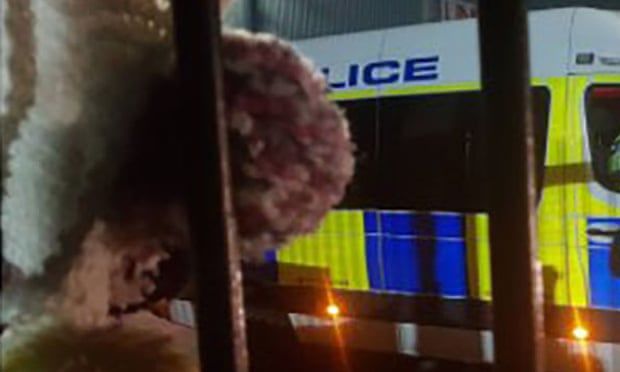 The occupants of a disused building in Glasgow that was reopened to offer emergency accommodation for climate activists have accused police of trying to break into the site with a battering ram early on Monday morning.

The activists at Baile Hoose, a former homeless shelter in the Tradeston district, said up to 20 officers from the Metropolitan police and Welsh forces mounted the raid at 3am, claiming to be acting under orders from Scottish police.

The activists said Police Scotland officers arrived soon afterwards and “calmed the situation. [It] was only then that the Met and Welsh police backed off.”

One witness to the raid said at least one of the liaison officers from Police Scotland appeared to be shocked at their colleagues’ conduct, and also said that an officer described it as “totally unacceptable” policing. Another activist said police had their batons drawn as they entered rooms, to the distress of many occupants.

A spokesperson for Police Scotland confirmed that officers went to the building. However, Police Scotland deny that the operation was a raid or an attempt to force entry, or that a battering ram was used.

“Around 3am on Monday 8 November, officers attended at a property on Centre Street, Glasgow, following concerns for the safety and security of those using the building. Officers will continue to engage with those currently in the property,” the spokesperson said.

A Baile Hoose spokesperson disputed that explanation. She said they had been occupying the building since 3 November and that the Scottish fire and rescue service had already inspected it, giving them advice about fire safety and battery-operated fire alarms, which were now installed.

The activists squatted in the building after it emerged that hundreds of Cop26 delegates, including indigenous leaders, were unable to find accommodation for the summit. There were unconfirmed reports of some indigenous activists sleeping rough.

“Baile Hoose has provided a safe home and meals for hundreds of activists during this summit,” a spokesperson said. “There have been a lot of people who have travelled here from all over the world and the country, and quite often people from marginalised communities are not getting their voices heard.”

Glasgow city council, which owns the building, said it had asked the activists to leave last week because it was concerned about the safety of its water supply and the possibility that the building could contain asbestos.