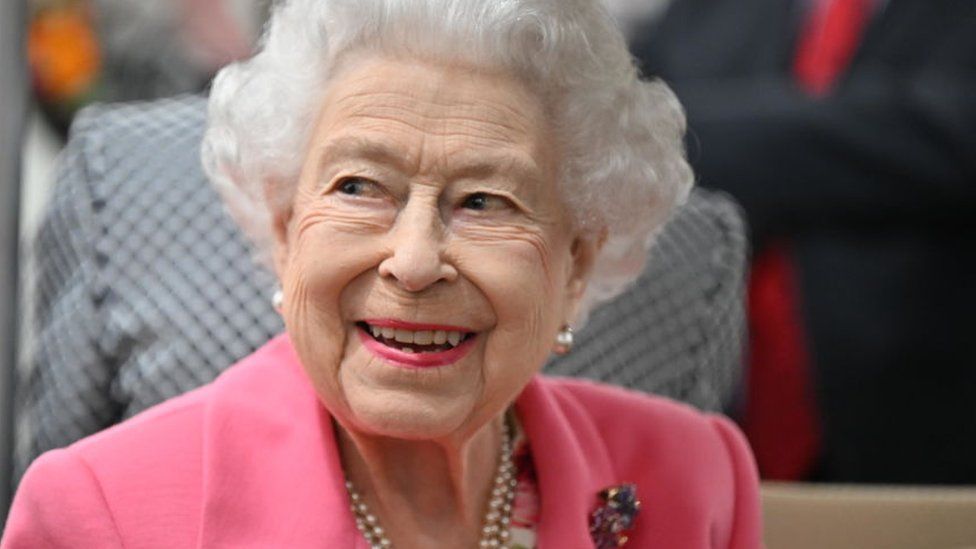 Platinum Jubilee: The Queen has sought to be nation's comforter-in-chief

As the UK celebrates her 70 years on the throne, Queen Elizabeth II has become the keystone in the nation's architecture, a solid and immovable piece holding the country's image of itself in place.

In 2002, in a speech to mark her Golden Jubilee, the Queen said she saw her role as "guiding this kingdom through the changing times".

"Change has become a constant; managing it has become an expanding discipline," she confessed.

These words represent the challenge the Queen had set for herself: to make consistency and constancy the key qualities of her reign, burnishing her image as a monarch who is dependable and loyal.

End of the Empire

Aged just 27 at her coronation in 1953, the Queen was presented to the world as a new beginning for an impoverished kingdom and its crumbling Empire. 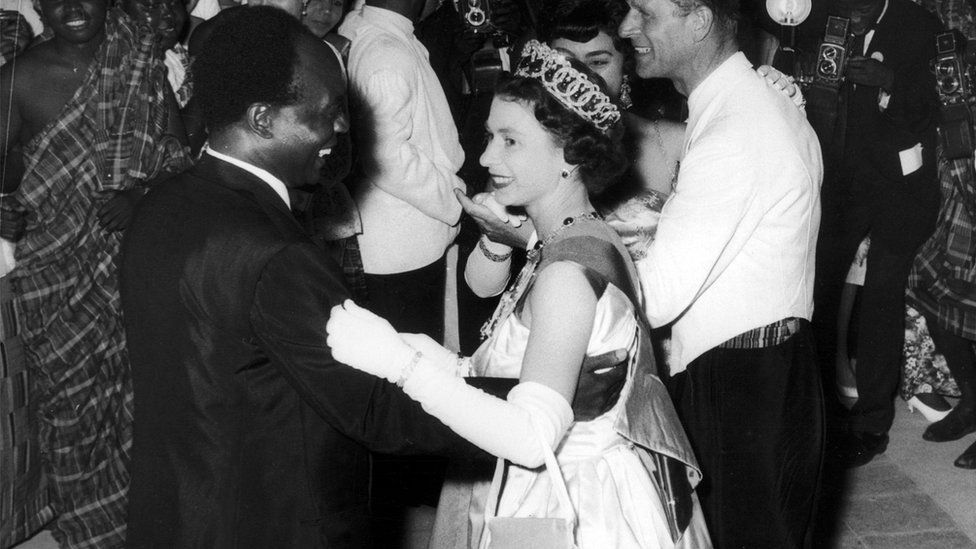 Elizabeth II dances with President Kwame Nkrumah of Ghana in 1961

"No longer an Imperial power, we have been coming to terms with what this means for ourselves and for our relations with the rest of the world," she said.

She threw her support behind the Commonwealth of Nations, which brought together Britain and its former colonies.

"The Commonwealth bears no resemblance to the Empires of the past," the Queen explained in her Christmas message in 1953. "It is an entirely new conception, built on the highest qualities of the spirit of man: friendship, loyalty and the desire for freedom and peace."

This was the Queen recognising that the monarchy and the country needed to adjust to post-war sensibilities, to values of international equality and independence, and to the decline of colonialism.

There was some jeopardy in allowing herself to become the figurehead for this new organisation.

To some, the Commonwealth symbolised the decline of Britain's influence in the world. Its early years also coincided with tensions over the arrival in the UK of immigrants from former colonies.

But the Queen's enthusiasm remained undimmed. "To that new conception of an equal partnership of nations and races I shall give myself heart and soul every day of my life," she promised.

In 1974, the year of the three-day week, roaring inflation, two general elections and an IRA bombing campaign on the British mainland, the Queen saw her role, once again, as comforter-in-chief. 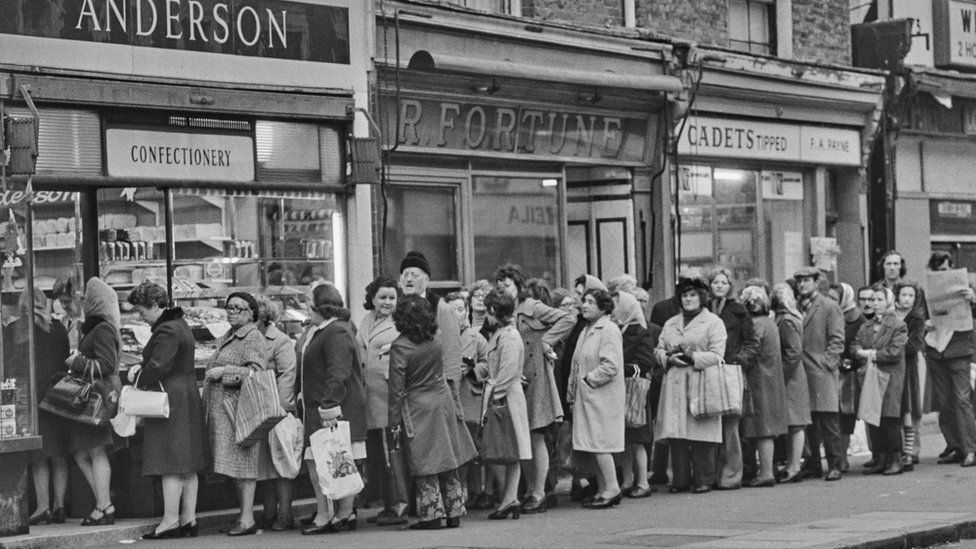 Customers queue for bread during a bakers' strike in 1974

"We hear a great deal about our troubles, about discord and dissension and about the uncertainty of our future," she said. "My message today is one of encouragement and hope."

In the fractured Britain of the 1970s, the Queen needed her words and actions to be seen as neutral and impartial. As so she reached for the eternal values which underpinned her philosophy.

On paper, it may seem glib. But these are ideals which the Queen has demonstrated throughout her life. Some may hope for a flash of raw passion or an unscripted glimpse of her views, but Elizabeth II has always been careful to appear predictable.

Inspired by her Christian faith, she has taken every opportunity to encourage people to find the good in the world. In 1978, another year of violence and discord in the UK, the Queen tried to lift the spirits of her nation.

"It is far from easy to be cheerful and constructive when things around us suggest the opposite," she said. "But to give up the effort would mean, as it were, to switch off hope for a better tomorrow. Even if the problems seem overwhelming, there is always room for optimism."

With the fall of the Berlin Wall in 1989, the Queen felt it was right to remind her subjects of their responsibilities during momentous change, and of the dangers of triumphalism.

"We, who claim to be of the free world, should examine what we really mean by freedom, and how we can help to ensure that, once in place, it is there to stay," she said.

Twelve years later, the terror of 9/11 rocked the world and the Queen also strove to encourage reconciliation and forgiveness. "Every one of us needs to believe in the value of all that is good and honest; we need to let this belief drive and influence our actions."

In 1992, having witnessed the marriage breakdown and divorces of two of her children and a terrible fire at her home in Windsor, the Queen confessed that the year had been a difficult one, her "annus horribilis". 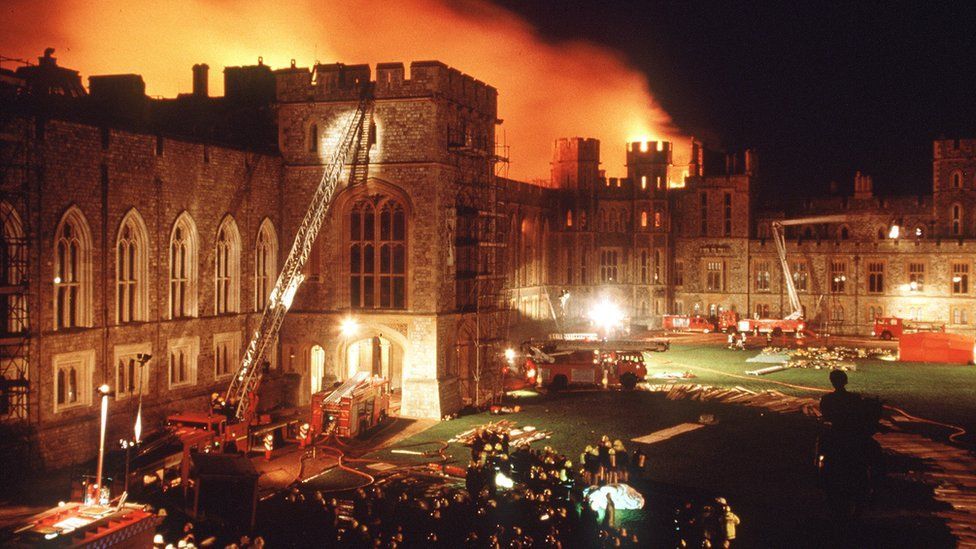 It was a period of crisis and scandal for the Royal Family, with their brand suffering significant reputational damage.

The Queen's response was to keep doing what she had always done, standing back from the fray and trying to "filter out the ephemeral from the enduring", as she would later put it.

"Distance," the Queen reflected, can "lend an extra dimension to judgement, giving it a leavening of moderation and compassion - even of wisdom - that is sometimes lacking in the reactions of those whose task it is in life to offer instant opinions."

Her answer to crisis was to reflect on the long-term: not a day's headlines nor a year's difficulties, nor even a reign's great challenges, but a timespan of centuries. 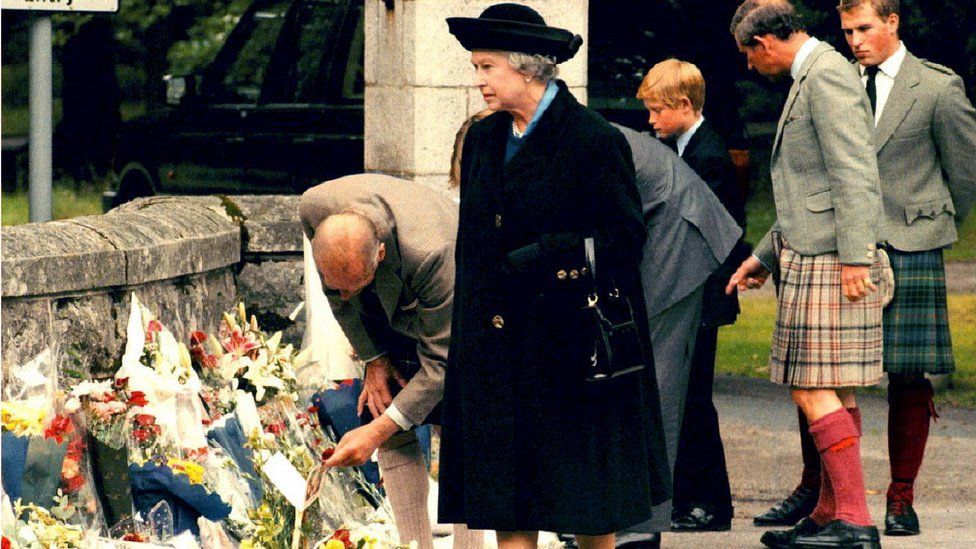 "The traditional values etched across our history equip us well for this age of change," the Queen said, neatly encapsulating her personal philosophy.

The death of Diana, Princess of Wales, in a car crash in 1997, prompted an outpouring of public anguish which put enormous pressure on the royals. There were demands that the Queen share her personal grief with the world.

The family initially remained at Balmoral with her grandchildren, the Queen ignoring calls for her to address the country. Six days after Diana's death, she did return to London and spoke live to the nation, dressed in funereal black.

"We have all felt those emotions in these last few days. So, what I say to you now, as your Queen and as a grandmother, I say from my heart," she said.

For perhaps the only time in her reign, she allowed the two distinct roles to become blurred - the public monarch and the private grandmother speaking as one to explain why she had stayed in Scotland.

"This week at Balmoral, we have all been trying to help William and Harry come to terms with the devastating loss that they and the rest of us have suffered," she explained.

Even in that special address on the eve of Diana's funeral, however, the Queen maintained an emotional distance, true to her conviction of how a monarch should behave. But it was a risk in a society that increasingly equated authenticity with wearing your heart on your sleeve.

It was a gamble that paid off. By the time of her Diamond Jubilee in 2012, the Queen occupied an unassailable position in the nation's hearts. 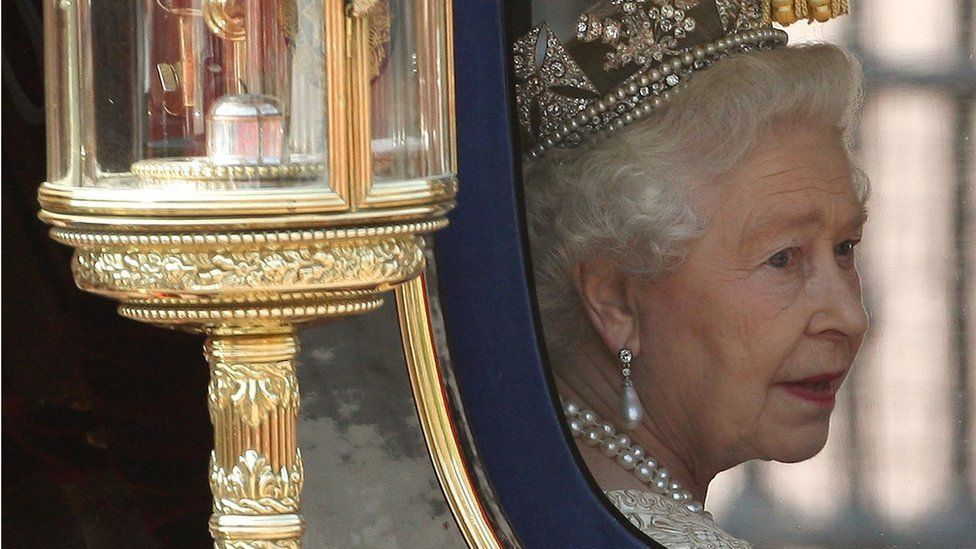 Throughout her reign and even during the most difficult of times for the Royal Family, republicanism had never attracted significant support in the UK.

People identified in the Queen an authenticity founded upon consistency. Whatever troubles and disappointments had come her way, the Queen was always true to her values and principles.

Now Her Majesty is celebrating a Platinum Jubilee, the first and only monarch to have reached such a milestone. It is an extraordinary moment for her and the country.

But the Queen will undoubtedly reflect on the timeless values that have underpinned her approach: the gentle, thoughtful and reassuring presence she has been in the life of her nation, easing the process of change for ordinary citizens across the land.

For the Queen, it has always been the "regular, worthy rhythm of life" that has truly mattered.