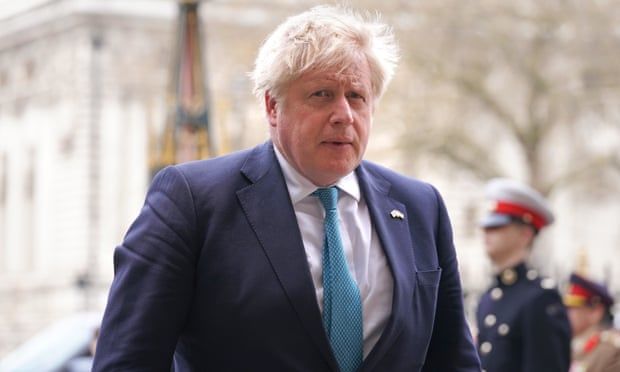 Analysis: Scotland Yard issuing fixed-penalty notices will only revive doubts in PM’s leadership among Tory backbenchers
It was an electrifying development that has given renewed hope to some Tory rebels hoping to oust the prime minister.

After all the bluff and bluster from Boris Johnson, the Metropolitan police announcement of 20 fixed-penalty notices for people over Downing Street parties is concrete confirmation that the authorities believe the rules were broken during lockdown.

Barely four months ago, the prime minister insisted this was not the case, telling MPs after details of one party were revealed by the Mirror: “What I can tell the right hon and learned gentleman is that all guidance was followed completely in No 10.”

Since then, many more parties have come to light, and Johnson has been forced to apologise for them.

Despite this, No 10 is clearly hoping to ride out the remainder of the scandal by refusing to accept that any wrongdoing took place.

The Ukraine war, allowing the prime minister to play the role of statesman abroad, has given his premiership new momentum, which he and his aides are desperate to hang on to.

Johnson’s operation is also hiding behind a veil of privacy by saying they will refuse to name the 20 people who are to receive penalties for partying on the Downing Street estate.

Tory MPs opposed to Johnson’s leadership, however, do not believe this position will hold, suggesting No 10 has learned nothing from previous sleaze scandals where denial, cover-up and stonewalling gave way to a late-stage U-turn.

They think the prime minister will have to come clean if senior figures in his government have been issued with penalties and take responsibility for creating the culture in which this was allowed to take place.

Already on Tuesday, Downing Street was forced to say it would in fact reveal if Simon Case, the cabinet secretary, receives a fine.

In addition, if Johnson himself is personally issued with a penalty in the coming days or weeks, No 10 has accepted that it will have to reveal this significant fact.

If this critical moment comes to pass, there are still dozens of Tories who believe Johnson should take the honourable step of resigning.

Even loyalists such as Robert Buckland, a former lord chancellor sacked by the prime minister last year, highlighted on Tuesday that the prime minister is not above the law. “I think any head of government who has been found to have infringed the law has got some explaining to do,” he said.

Behind closed doors, there are many Tory MPs who still believe – perhaps through wishful thinking – that this will be the tipping point of his premiership, despite the global uncertainties over the Russian invasion.

Moreover, when all the fixed-penalty notices have been issued and the Met investigation is over, Johnson will still have to get through the publication of Sue Gray’s full report, which will go into more detail about alleged wrongdoing at each of the various parties.

Some Tory MPs have come back onboard with the government, such as Andrew Bridgen, who previously submitted a letter of no confidence but on Tuesday urged colleagues to “get behind” the prime minister.

However, there are other signs that Johnson’s government remains weak and divided, with Partygate having seriously undermined his authority – perhaps permanently.

The whips were unable to stop a revolt of Tory backbenchers over the release of intelligence advice about Evgeny Lebedev’s peerage, despite the government clearly arguing the release would be a breach of protocol.

The combination of the lockdown parties and the Owen Paterson sleaze scandal has left the Conservative rank and file in parliament unable to trust their leadership to make the right judgments on the issue of standards. And on this occasion, they refused to vote to block the publication of the peerage advice.

It is an ominous sign for Johnson if he can no longer command his party – with a majority of 80 – to troop through the voting lobbies for him.

The rebels may well not get the requisite 54 letters required for a confidence vote, and even if they do, Johnson may win the subsequent vote on whether he should stay on, particularly as Rishi Sunak’s badly received spring statement last week leaves them short of a convincing successor.

But the fact remains that trust in Johnson’s leadership remains low, even on his own side, and that leads to the conditions in which a prime minister loses control of his own party, finding it very difficult to govern.
#Boris Johnson  #Johnson
Add Comment