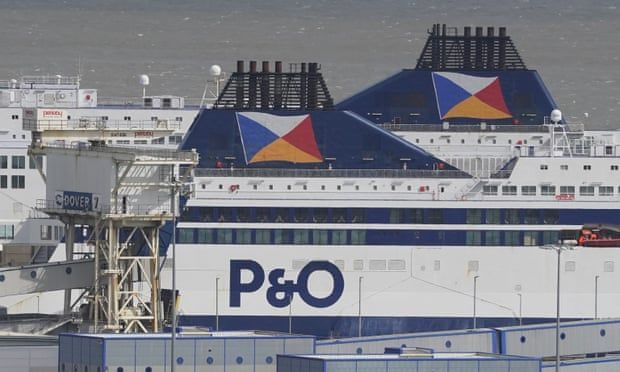 Criminal and civil investigations have been launched into the conduct of P&O Ferries after the operator summarily sacked nearly 800 crew without notice or consultation.

The Insolvency Service said it had “initiated both formal criminal and civil investigations” into the circumstances of the redundancies, after making inquiries at the request of the government.

The move was confirmed in a letter to the business secretary, Kwasi Kwarteng, who tweeted that he and the transport secretary, Grant Shapps, would “continue to follow this matter closely as the investigations progress”.

The announcement comes after Shapps appeared to admit court action would not be taken by the government, backtracking on an earlier statement by the prime minister, Boris Johnson.

The move will be welcomed by MPs on all sides who had urged the government not to let P&O escape without sanction for choosing to break the law.

The P&O Ferries chief executive, Peter Hebblethwaite, admitted last week in an extraordinary Commons hearing that there was “absolutely no doubt we were required to consult with the unions … We chose not to do that.”

The firm laid off 786 crew on British contracts issued out of Jersey, telling them that they were being replaced by cheap agency workers with immediate effect, and imposing a deadline for them to accept a compensation payoff while forfeiting the right to legal action. All but one of the sacked crew had accepted by yesterday’s deadline.

A spokesperson for the business department said on Friday: “Today the Insolvency Service has confirmed it has commenced formal criminal and civil investigations into the circumstances surrounding the recent appalling behaviour of P&O Ferries, following the business secretary asking they undertake a thorough review.

“We will not provide further comment while investigations are ongoing.”

The Insolvency Service reaches the point of launching an investigation when it considers there is sufficient good reason to do so and that it is in the public interest. Pressure on the service to move ahead swiftly came soon after the parliamentary business and transport committee hearings, after it had given an original commitment to decide by 7 April.

The TUC general secretary, Frances O’Grady, said the probe must not “shy away from serious sanctions and big financial penalties”.

She added: “P&O must not be allowed to get away with its scandalous and unlawful treatment of staff. Firms who behave like corporate gangsters deserve far more than a slap on the wrist.”

Mick Lynch, the RMT union general secretary, said: “This is long overdue but now gives clear grounds to detain P&O’s ships while the criminal and civil investigations are completed, and justice is delivered for our members in face of this corporate hostility.”

The investigations could potentially lead to the disqualification of Hebblethwaite as a director. The chief executive has so far resisted calls from Shapps and others to resign for what the transport secretary called his “brazen and breathtaking” testimony and actions.

Nautilus and international seafarers’ unions last night projected video images of the saga on to the white cliffs of Dover, including both the firm’s recorded message telling crew they were sacked, and Hebblethwaite’s admission at the hearings.

Most P&O Ferries sailings have yet to resume. The Maritime and Coastguard Agency has detained two of its ferries, the Pride of Kent, which sails between Dover and Calais, and the European Causeway, held in Larne, which normally operates the Northern Ireland to Scotland crossing. Inspectors had concerns about the replacement crew’s readiness to sail the ship. P&O has accused the agency of acting with “unprecedented levels of rigour”.