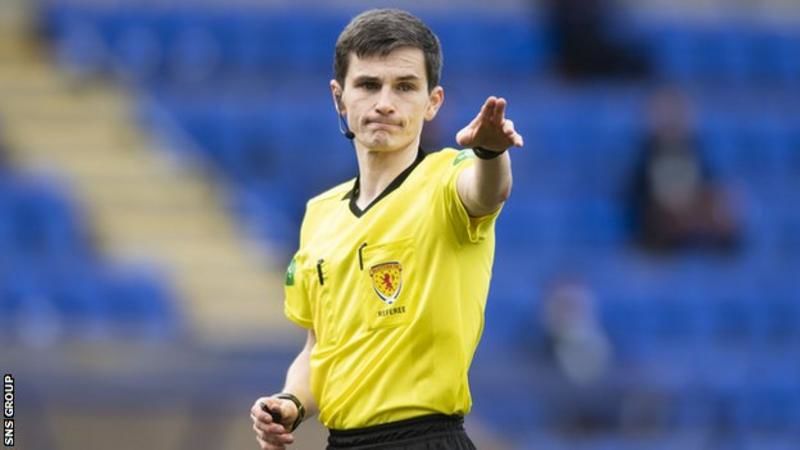 Referee Craig Napier says he has experienced "overwhelming support" since coming out publicly as gay.

Napier and fellow category one official Lloyd Wilson made the announcement via the Scottish FA last week.

"The response we've had has been fantastic," he told BBC Scotland. "The ripples are already in effect.

"The reach has been global. I've had messages of support from as a far as Namibia and Tajikistan. Domestically, the support has been overwhelming."

Talking to Sportsound, Napier said: "Many of my refereeing colleagues already knew and their ongoing support has been great.

"Players have been in touch, chief executives up and down the country too. People are wanting to work together to make football that safe space for everyone."

Napier repeated that the "process hasn't been about me specifically", stressing "it's been about trying to make a difference".

"I started this journey of telling somebody when I was 18 and it's taken me until 30 to have these open conversations," he added.

"Society has moved quite significantly in the last 10 years. I can remember being a young referee and thinking 'I'd better not let anyone know or I'll have no chance of progressing'.

"I wish I'd done it sooner, but now felt like the right time to add to the voices that are already out. It's really important in terms of visibility.

"As well as heart-warming messages, there have been a few heart-breaking ones too; people who have walked away from playing or refereeing from a young age because they were scared of coming out or being found out.

"I'd like us to get to a place when this isn't news. I'd like it to be an organic process. Think about end of season celebrations when the players bring their girlfriends, wives and kids onto the pitch. I'd like people to discover a player's sexuality because they bring along their husband or boyfriend - or fans see partners together on social media.

"But, until people are there to be seen, that's not going to happen. So I'd ask those saying they don't care to be patient and give us their support so others do feel more comfortable."