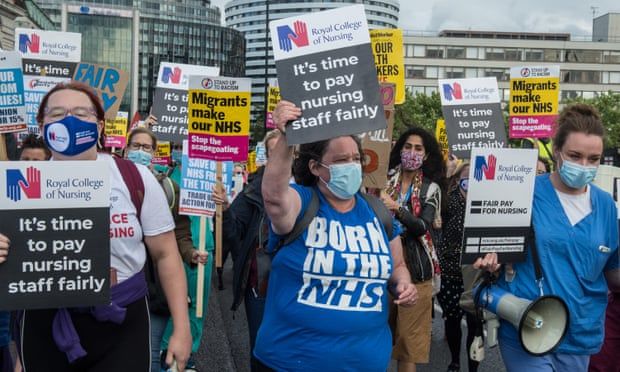 Royal College of Nursing says 92% of its members in England believe 3% pay offer is unacceptable
The prospect of nurses in England striking for the first time has drawn nearer after their union decided to ballot members on taking industrial action over their 3% pay rise.

The Royal College of Nursing (RCN) will undertake an indicative ballot to see if nurses are prepared to work to rule or go on strike in protest at the government’s “completely unacceptable” offer.

The move increases the likelihood of walkouts by NHS staff in the months ahead, as the RCN is the latest of several unions to reject the 3% plan and start exploring the possibility of industrial action.

A consultation by the RCN found that almost 92% of nurses in England believe the 3% offer is unacceptable. The union wants nurses’ pay to go up by 12.5%.

Graham Revie, the chair of the RCN’s trade union committee, said: “Our members were very clear in telling the prime minster that his NHS pay deal was completely unacceptable. It fails the test of fairness and it fails to address the current crisis by not taking action to safely staff our wards and clinics.”

The RCN represents 465,000 nurses across the UK. The indicative ballot will ask members in England if they back the principle of industrial action to further their pay claim and, if so, if they are prepared to work no overtime or withdraw their labour.

Depending on the result, the RCN’s ruling council and trade union committee will then consider what to do next. Ballots will go out in the next few weeks.

Unite, which represents 100,000 NHS workers, found in a consultative ballot that 90% of them are opposed to the 3% rise. It found 84% were prepared to take industrial action to try to win a more generous deal.

When it announced members’ comprehensive rejection of the offer on Monday, Unite said it would “now plan for a comprehensive programme of targeted industrial action in the coming months as the RPI rate of inflation increased to 4.8%”.

The GMB union plans to hold a strike ballot after 93% of its members in the NHS rejected the government’s offer. It said health service personnel deserved a 15% increase.

The Hospital Consultants and Specialists Association, which represents about 4,000 senior hospital doctors, launched a consultative ballot of its members in July. It has not yet announced the results but it has said that it may move to a ballot for industrial action, depending on the strength of feeling that emerges.

Unison, which speaks for about 100,000 NHS staff including paramedics and hospital porters, said last month that 80% of its members had rejected the 3% offer in a consultative ballot.

Nurses in Northern Ireland went on strike in December 2019 over issues include understaffing and pay. Nurses in Scotland have entered into a formal dispute process with the Scottish government after rejecting its recent offer of an average 4% uplift in pay.

A Department of Health spokesperson said: “NHS staff – from doctors and nurses to paramedics and porters – are rightly receiving a 3% pay rise this year in recognition of their extraordinary efforts throughout this global pandemic. This follows the recommendations of the independent NHS pay review body and the review body on doctors’ and dentists’ remuneration, who considered a wide range of evidence from organisations across government, the NHS and trade unions in making the decision.”
Add Comment