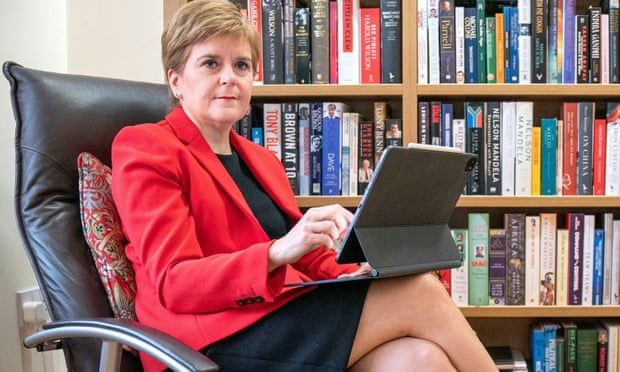 Scottish first minister confirms poll will not be held until curbs are lifted and pressure on NHS has eased
The spirit of cooperation between the Scottish and UK governments established during the pandemic should result in agreement on a second independence referendum, Nicola Sturgeon has said.

In comments released ahead of her speech at the Scottish National party online conference on Monday, the first minister is expected to say that “democracy must – and will – prevail”, regarding the results of May’s parliamentary election in Scotland, which returned a pro-independence majority.

The UK government has until recently consistently refused to countenance giving Holyrood the powers to hold a second legal referendum. But in recent months, and since May’s election, that stance has softened, with the Scottish secretary, Alister Jack, saying last month that Westminster could grant one if support remained at 60% for a sustained period.

“So it is in that spirit of cooperation that I hope the Scottish and UK governments can reach agreement, as we did in 2014, to allow the democratic wishes of the people of Scotland to be heard and respected,” Sturgeon will tell delegates.

The first minister has repeatedly pledged to hold another poll by the end of 2023, but only if the public health crisis is over.

On Sunday, delegates at the Scottish National party’s online conference backed a motion calling for a draft referendum bill to be brought forward “at the earliest moment”, but the party leader told Sky News that morning that another poll will not be held until pressure on the NHS has eased and all coronavirus curbs have been lifted.

Sturgeon said that for a referendum campaign to have proper focus from the public, it was crucial that there was “an overall environment in the country where people are not in their day-to-day lives being asked to limit or restrict their behaviour”.

“This is not just about safety of polling stations,” she said. “It is about making sure that as a country faces a big, important decision about its future, it’s able to focus on that properly and it doesn’t have looming over that a Covid crisis.”

Later on Sunday, the SNP membership supported a motion by 535 votes to 10 that stated the decision “should be determined by data-driven criteria about the clear end to the public health crisis, which would allow a full, normal and energetic referendum campaign”.

In his leader address to the Alba conference, taking place on the same weekend as the SNP’s gathering, Alex Salmond was again critical of Sturgeon’s approach to a second referendum, telling delegates: “If you constantly march people up to the top of the hill and then down again, then you end up all singing Rule Britannia.”

Mocking Sturgeon’s announcement in her programme for government last week that civil servants were resuming work on the case of independence, the former first minister and former SNP leader said: “Wow. Haud me back. It is perfectly reasonable for the SNP to conduct a virtual conference – but not to conduct a virtual referendum campaign.”

Salmond said a strategy was needed to overcome the repeated refusal of the Westminster government to grant Holyrood the necessary powers to hold a legal referendum. “After 2011, we faced down David Cameron and George Osborne,” he said. “Are we really saying Scotland can’t face down Boris Johnson and the disco king himself, Michael Gove?”
#Boris Johnson  #Coronavirus  #Johnson  #Covid
Add Comment