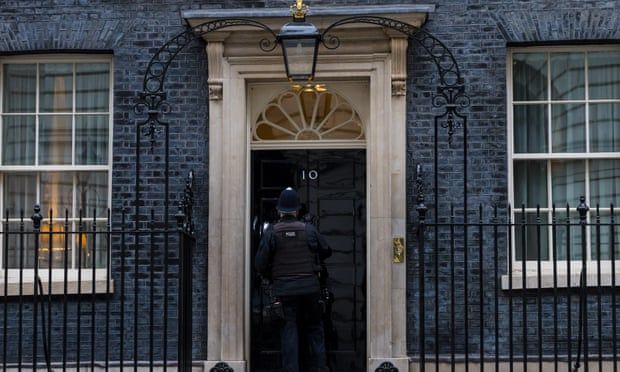 A ‘separate offence’ could be committed if officials discuss answers to questionnaire, according to Cabinet Office
Downing Street staff have been told not to confer with each other when answering a Metropolitan police questionnaire about potentially Covid rule-breaking parties, with a warning this could constitute a “separate offence”.

Fresh guidance issued by the Cabinet Office on Tuesday to those who may be contacted by Scotland Yard about the dozen gatherings under investigation said they could still “seek legal advice” before responding.

The questionnaires began to be issued late last week – including to the prime minister, Boris Johnson – and officers will “continue to contact individuals this coming week”, the leaked document said.

Officials were told they could call a “legal information helpline at no cost to the individual”, which is an existing resource available to all civil servants. It gives them access to a 20-minute general consultation with a dedicated legal adviser on a range of issues, including the “impact of criminal activities”.

While the document said the Met had not told the Cabinet Office how long the investigation would take, it noted that inquiries were “progressing at pace”.

Those asked to fill in the questionnaire were told they should give an explanation for their alleged attendance at the event in question, allowing them a chance to provide “further circumstances you want the Met to take into account”.

It added: “You are entitled to seek legal advice before you respond to the questionnaire and you can discuss your response with your legal adviser.

“If you discuss your answers with anyone else who may have been involved this could amount to a separate offence.”

Scotland Yard has said all responses to the questionnaires issued must be submitted within seven days of receipt.

In the question and answer document prepared by a special liaison unit set up in the Cabinet Office, government workers were told to “make arrangements to ensure you can access your emails if you are on holiday” to ensure they met the deadline.

If uncomfortable about the Met contacting them via their work email address, officials were reassured they could give the Cabinet Office “an alternative email address” for any further contact.

The document confirmed a previous commitment that anyone who receives a fixed penalty notice “will not be publicly identified” by the Met.

It said Scotland Yard “will not make public the details of their investigation and therefore your line manager will not be notified”.

The document also warned that while fines for attendance at events that broke Covid laws started at £100, anyone found to “have organised or facilitated a large gathering” could face a charge of up to £10,000.

Despite the Met having been passed 300 photographs as part of its investigation – known as Operation Hillman – the memo said the Cabinet Office “would not expect the Met to publish photographs”.

The Cabinet Office also said it did not know if the Met would release a breakdown of how many fixed penalty notices would be handed out for each event.

Last week, Downing Street pledged to reveal if Johnson is fined by police for attending any parties while Covid restrictions were in force.

However the prime minister refused to rule out staying on even if he is found to have broken the law.

He told journalists: “We’re going to wait for the process to be completed.”

Once the Met’s investigation is over, the full findings of an investigation run by the senior civil servant Sue Gray are expected to be published.
#Boris Johnson  #Johnson  #Covid
Add Comment