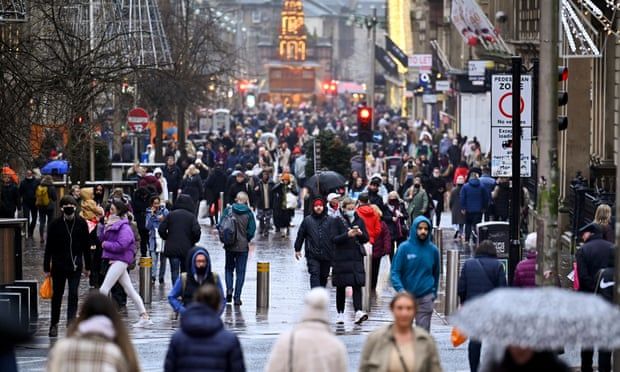 In a strongly worded statement ahead of first minister’s questions on Thursday, Scotland’s first minister told MSPs: “If we don’t act now, what we have feared all along but so far avoided, the overwhelming of the NHS, could happen.”

Appealing directly to the public, she went on: “Please reduce your contact with people from households other than your own as much as you possibly can. Please stay at home much more than you normally would and as much as is feasible.”

Speaking in the Holyrood parliament, she said 5,951 coronavirus cases were reported on Wednesday, 45.4% of which were likely to be Omicron.

Sturgeon also called for immediate talks with Boris Johnson to discuss putting in place a financial support package for businesses, as she dismissed an earlier Treasury announcement of advance funding for devolved administrations as “not enough”.

“Lives again are at risk here, livelihoods are at risk and the NHS is at risk. Yes, the government’s got to speed up vaccination but all of us have to come together to do what is required to slow this down. And the UK government has to step up and provide the financial support that businesses need.”

She added: “We must not sleepwalk into an emergency that for both health and business will be much greater as a result of inaction than it will be if we act firmly and strongly now.”

Sturgeon said she wanted to “strongly underline” her advice on Tuesday that people should limit their indoor social mixing to no more than three households over the festive season, although family Christmas celebrations can still go ahead, adding that there was “no evidence” that Omicron was milder than other variants.