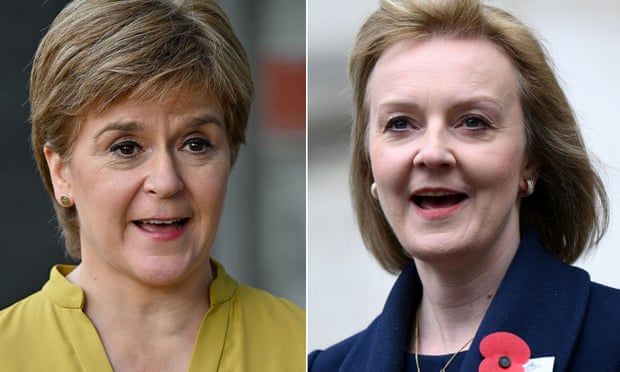 Nicola Sturgeon has claimed Liz Truss quizzed her about how to land an interview in Vogue magazine when they met briefly at Cop26 last year.

Speaking at an Edinburgh fringe event on Wednesday, the Scottish first minister recalled meeting the Conservative leadership favourite at the global climate conference in Glasgow shortly after the magazine interview – her second with the fashion bible – had come out.

“I remember it quite well actually,” Sturgeon told the audience. “I had just done, and this is going to sound really up myself but I don’t mean to … I’d just been interviewed by Vogue, as you do … that was the main thing she wanted to talk to me about, she wanted to know how she could get into Vogue.

“I said to her, they came and asked me.”

Sturgeon was responding to comments made by Truss during a Conservative leadership hustings event in Exeter in which Truss labelled Sturgeon an “attention seeker” and told the audience that “the best thing to do with Nicola Sturgeon is to ignore her”.

Ruling out a second independence referendum, Truss had told the audience: “She’s an attention seeker, that’s what she is. What we need to do is show the people of Scotland, Northern Ireland and Wales what we’re delivering for them and making sure that all of our government policies apply right across the United Kingdom.”

Speaking to political commentator Iain Dale at the Edinburgh fringe event, Sturgeon said that when she told the foreign secretary that she had in fact appeared in Vogue twice (once in 2015 and again in 2021), Truss “looked a little bit as if she’d swallowed a wasp”.

“I remember it because there we were at the world’s biggest climate change conference in Glasgow, world leaders about to arrive. That was the main topic of conversation she was interested in pursuing. And once we’d exhausted that it kind of dried up.”

“I’m sure we’ll have many more conversations about many more substantive things,” she added. “I’m sure she’ll be in Vogue before too long.”

The Guardian has approached Vogue for comment on whether Truss is to appear in a future issue.