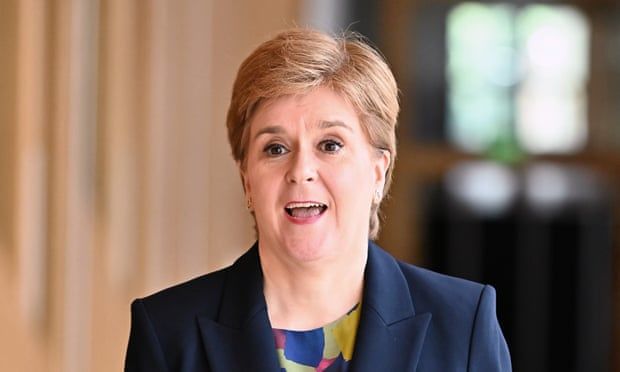 Nicola Sturgeon has announced a rent freeze for public and private properties and a ban on winter evictions, in a package of measures “deliberately focused” on the cost of living crisis.

Describing pressures on household budgets as a “humanitarian emergency”, Scotland’s first minister set out the annual programme for government as the Holyrood parliament met for the first time after the summer recess.

The emergency legislation to protect tenants in private and socially rented homes comes only a few months after a similar proposal by Scottish Labour, to freeze rents for two years until rent controls are introduced in 2024, was voted down by SNP and Scottish Green MSPs.

Sturgeon also announced an increase in the Scottish child payment – which she called “the most ambitious child poverty reduction measure in the UK” – from £20 to £25 weekly for every eligible child from November.

But the SNP leader also warned of “hard choices” as she laid out the increasing constraints on Scotland’s budget, describing Holyrood’s powers over tax and borrowing as “woefully inadequate”, and warning “we cannot do everything that, in more normal times, we’d want to do”.

Inflation meant that her government’s budget today was “worth a staggering £1.7bn less than when it was published last December”, she told MSPs, underlining that hard-won public sector pay deals – concluded last Friday to halt a fresh wave of strikes – were costing £700m more than budgeted for.

Plans for an emergency budget review, intended to “maximise the help we can provide – while still balancing the books” depended upon the immediate actions of the new prime minister, she added.

“If Liz Truss decides to pay for irresponsible and regressive tax cuts by reducing spending on public services, that could mean an immediate cut in Scotland’s budget,” Sturgeon said.

Her deputy, John Swinney, is due to make a separate financial statement on Wednesday.

*  ScotRail fares being frozen until at least March 2023.

*  The creation in law of a national care service.

*  A criminal justice bill to abolish the controversial not proven verdict and introduce statutory anonymity to victims of sexual offences.

Sturgeon also pledged to legislate for another referendum on Scottish independence on 19 October next year, if the supreme court rules that her government can legally hold a second vote.

“This current crisis highlights – starkly – the pressing need for independence,” she said, with powers over borrowing, taxation and energy regulation reserved to Westminster, leaving her government without the necessary levers to respond to it.

But the Scottish Conservative leader, Douglas Ross, said a second referendum was “unacceptable at a time when people are struggling”, adding that “the prime minister has changed, but sadly it’s the same first minister directing blame elsewhere and seeking grievance with the UK government”.

The Scottish Labour leader, Anas Sarwar, said: “No one will be surprised by the inclusion of a referendum bill today, but they will be frustrated by the waste of money and resources.”

He added that he welcomed the change of heart from the SNP and the Greens on rent freezes.

The Scottish tenants’ union, Living Rent, welcomed the freeze but cautioned: “We also know that rents are already too high and have increased by over 60% in Scottish cities in the last 10 years. This rent freeze will need to stay in place until the Scottish government brings in proper rent controls that push rents down.”

Responding to the announcement, John Blackwood, the chief executive of the Scottish Association of Landlords, accused the government of “attacking landlords for political reasons”, suggesting that the proposals “will only further reduce the supply of housing, putting more people at risk”.