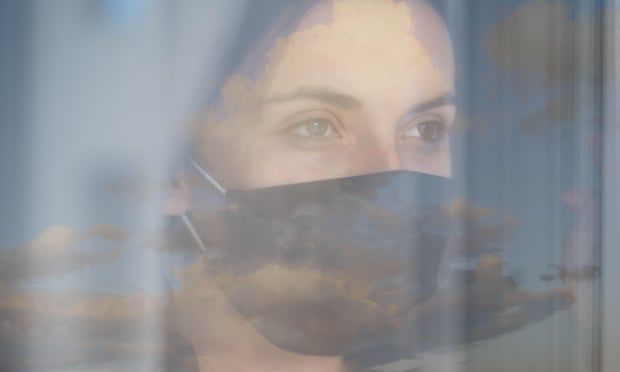 NHS leaders have voiced alarm at a major rise in the number of hospitalisations due to Covid-19 after 1,171 people with the disease across the UK were admitted in a 24-hour period that set another record number of daily cases.

The latest government figures showed 122,186 cases of coronavirus had been recorded as of 9am on Friday. Another 137 people died within 28 days of testing positive.

Matthew Taylor, the chief executive of the NHS Confederation, said: “Daily hospital admissions with Covid have gone up by over 40% in the last week in England [from 815 to 1,098] and this is really worrying for health leaders whose teams are working flat out in the context of rising staff absences and wider pressures.”

He urged the public to behave cautiously and accept invitations to get vaccinated as, despite studies showing that the new Omicron variant is less likely to leave people infected seriously unwell, “this virus presents a very real risk to daily life and to the NHS.” 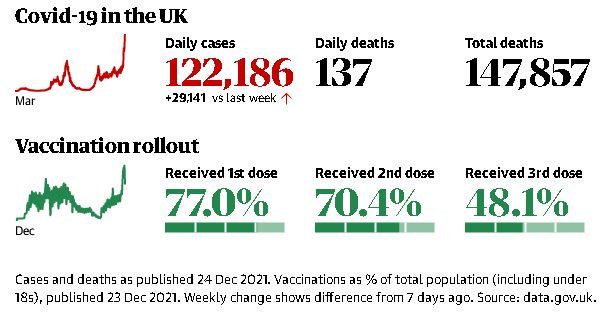 NHS Providers, another hospital body, warned that the number of people hospitalised in London had doubled in the space of a week.

The NHS is already facing a number of other pressures, including high demand for A&E care, staff delivering Covid booster vaccines, major shortages of frontline personnel and growing numbers of workers off sick due to the virus, he added.

Family gatherings over the festive period are likely to result in more older people becoming ill with Omicron, he cautioned.

“The need to see what happens as larger numbers of older people start to be infected with the new variant. It is likely the number of older people catching Omicron will increase given the amount of inter-generational contact over the next 72 hours of Christmas.”

Meanwhile, data has emerged showing Covid infection levels have reached a new record high. An estimated 1.7 million people in the UK had Covid-19 in the week ending 19 December, the highest number since comparable figures began in autumn 2020, the Office for National Statistics (ONS) said.

The interim data, published on Friday, also showed that about one in 35 people in private homes in England had Covid in the week to 19 December, up from one in 45 in the seven days to 16 December.

This is the highest estimate for England since the ONS began estimating community infection levels for England in May 2020, and is equivalent to about 1.5 million people.

In London that rose to about one in 20 people likely to test positive for Covid-19, the highest proportion for any region in England, the ONS said. North-east England had the lowest proportion, at about one in 55.

The ONS also said that Covid infections compatible with the Omicron variant had increased in all regions in England with “substantial regional variation”, again with the highest rates in London and the lowest in the north-east.

Sir Ian Diamond, the UK’s national statistician, told the BBC the “sobering” figures showed “really big increases” in Covid cases, with London “clearly the epicentre of the Omicron epidemic”, with numbers going up “really steeply”. He added: “There are increases right across England, with the slight exception of the south-west, increases in Wales and Northern Ireland, and Scotland has gone up just a little bit.”

There were some indications of people engaging in “safer behaviour” in response to the Omicron wave, he said, but he remained cautious. “At the moment I think it’s far too early to suggest that we will see anything other than a continued rise.”

In Wales, around one in 45 people were estimated to have had Covid-19 in the week to 19 December, slightly below the record of one in 40 in October.

But Harries said it was too early to downgrade the threat from the new strain and more information was needed, in particular about the impact it had on elderly and more vulnerable patients.

There will be no statistics on coronavirus cases or vaccinations on 25 and 26 December. Daily reporting will resume on Monday 27 December.