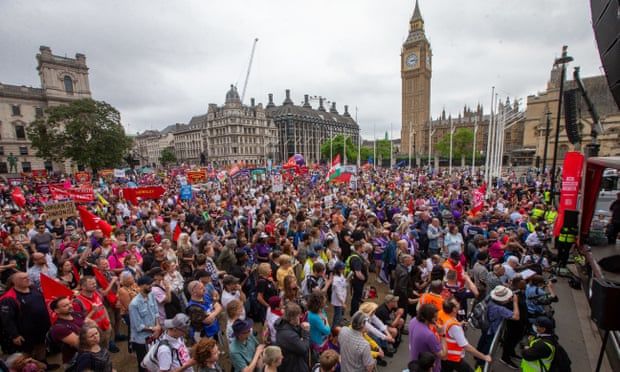 Rail unions set to walk out on Tuesday, as clashes loom over public sector pay offers falling short of inflation

A wave of 1970s-style economic unrest is threatening to spread from the railways across the public services, as unions representing teachers and NHS workers warn of potential industrial action over pay.

With the country preparing for rail strikes on Tuesday, Thursday and Saturday which will see half the network shut down, the biggest teaching union, the National Education Union (NEU), told the Observer that unless it receives a pay offer much closer to inflation by Wednesday, it will be informing education secretary Nadhim Zahawi of its plan to ballot its 450,000 members. The move could lead to strikes in schools in England in the autumn, the union said.

Another flashpoint could come this week when millions of NHS workers up to senior nurse level receive their annual pay offer, which is expected to fall substantially short of inflation, currently running at 9.2%.

The country’s biggest union, Unison, representing NHS staff, said the government now faced a choice between offering a deal close to inflation or triggering a mass exodus of staff coupled with possible industrial action in hospitals, at a time when they are already hugely overburdened. 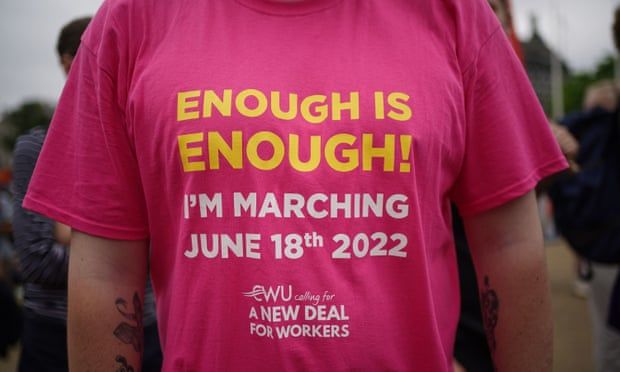 A message on a T-shirt as Unison members take part in the TUC national demonstration in central London.

The prospect of strikes across the public services has grown as inflation climbs towards double figures but the Treasury is desperate to keep public spending, and the public sector pay bill, in check.

The sense of crisis deepened last week when the Bank of England said inflation would climb to 11% this autumn, even after interest rate increases – which will themselves see rising mortgage payments adding to the cost of living crisis. Final offers to teachers, NHS workers and millions of others in the public sector are expected to be between 3% and 4%.

Kevin Courtney, joint general secretary of the NEU, said last night that unless the government offers “significantly” above the 3% Zahawi floated earlier this year, the union would ballot its members to gauge reactions, then could organise a second ballot specifically on industrial action.

“If there is no significant improvement on 3% – which will leave an 8% gap with inflation this year alone – we cannot avoid a ballot. The mood among teachers has changed. Last year the issue was mainly workload. This year it is workload and pay.

“Teachers are doing calculations to see what their hourly pay works out at. Pay is already down 20% on 2010. The strains are showing. One in eight of new graduate teachers are leaving in their first year.”

Last night, another teachers’ union, the NASUWT, joined those threatening strikes, saying that unless its pay demands were met it would also ballot members on industrial action from November in England, Scotland and Wales.

Unison general secretary Christina McAnea said the quality of NHS services in England was at stake because staff would leave if they did not receive a fair pay increase. “The government has a simple choice. Either it makes a sensible pay award, investing in staff and services and reducing delays for patients,” she said. “Or it risks a potential dispute, growing workforce shortages and increased suffering for the sick.”

Yesterday, thousands of people gathered at an event organised by the TUC in central London to demand action from the government on the cost of living crisis. Ben Robinson, 25, who works for a housing charity, and Frankie Brown, 24, a teacher, were at the protest. Brown said: “Every day, kids in my class are going back to homes where they don’t have enough to eat.”

Robinson said: “We’ve got residents coming into our offices who are choosing between feeding their kids – not themselves – and paying rent and heating. That is not a choice anyone should have to face in one of the biggest economies in the world.”

Network Rail said yesterday it was planning to resume talks on Sunday with the Rail, Maritime and Transport union (RMT) over what is described as the biggest shutdown on the rail network for more than three decades.

Tim Shoveller, chief negotiator for Network Rail, said rail bosses were keen to avert a “needless and damaging” strike over pay, jobs and conditions. Senior sources say some progress has been made in the talks, but the RMT said yesterday the strikes would go ahead as planned.

RMT general secretary Mick Lynch said: “Despite the best efforts of our negotiators, no viable settlements to the disputes have been created.”

Transport secretary Grant Shapps said the railways were on the brink of major disruption which would cause misery across the country: “Children sitting exams will face the extra distraction of changing their travel plans. And vulnerable people with long-awaited hospital appointments may have no choice but to cancel.”

Ahead of the rail strikes, Eurostar has become the latest operator to cancel trains: a total of 41 between next Tuesday and Saturday have been axed – putting breaks to France, Belgium and the Netherlands at risk. The firm said it was seeing ‘unprecedented contact levels across phone, email and social channels’ after its announcement.

Gatwick Express trains will not run on strike days, but limited Southern and Thameslink services between London Victoria or London Bridge and Brighton will call at the airport in West Sussex.

Most operators are planning some form of skeleton service over the three strike days – Tuesday, Thursday and Saturday from 7.30am until 6.30pm. But Merseyrail said today that none of its trains would run over those days, nor any buses. The only other operator to cancel all services so far is the Caledonian Sleeper.

Shapps said that workers were carrying out an “act of self-harm” by walking out, that union bosses were driving them to do so “under false pretences”, and that the strikes were ‘the last thing’ they should do.