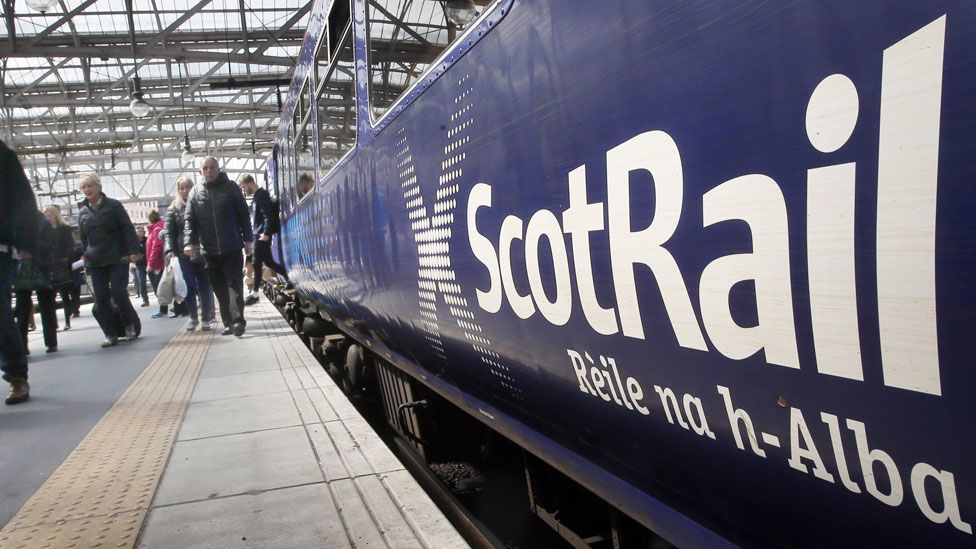 ScotRail train drivers have been offered a 4.2% pay rise and improved conditions, according to their union.

It follows a day of negotiations between the rail company and Aslef.

The union's Scottish organiser, Kevin Lindsay, said the improved pay offer would be put to members for their consideration.

ScotRail, which brought in a reduced timetable this week to cope with driver shortages, said the new pay offer was final and could not be improved.

The reduced timetable saw almost 700 fewer train services a day on the Scottish network, with many later services cancelled.

The train drivers have been in dispute over a 2.2% pay offer, which Aslef said was not acceptable in times of soaring inflation.

Mr Lindsay said: "Aslef entered these talks in good faith. We have negotiated a pay offer of 4.2%, a three-year no compulsory redundancy deal and a number of other improvements.

"These will now be put to our members for their consideration."

A verbal referendum will take place at a meeting later on Thursday but the full consultation is likely to last up to four weeks and will be followed by a formal vote.

Mr Lindsay told BBC Scotland it was up to train drivers to decide whether to return to working overtime in the meantime.

"The emergency timetable imposed by ScotRail cut too far, too deep, and in my opinion was not necessary," he said.

"They should have come round the table and spoken to us a lot sooner and encouraged the drivers to work. However, they didn't and now they have faced the consequences of it."

The RMT union, which represents other railway workers, has balloted members over strike action but will hold separate negotiations with ScotRail on Tuesday.

A typical ScotRail driver salary is more than £50,000.

Drivers were initially offered a 2.2% pay rise and the opportunity to participate in a revenue share arrangement, which the Scottish government said would take the total package to 5%.

The new pay offer from ScotRail is a substantial improvement on the previous offer and a surprise.

Unions said they had gone into today's talks in hope rather than expectation.

A 4.2% rise is still well below inflation but there are various sweeteners attached.

But there is a potential problem.

ScotRail was brought back into public ownership in April. The company had argued that it was now bound by public sector pay policy.

Other public sector unions will be looking at the 4.2% rise offered by ScotRail.

How will employees such as teachers and council workers feel if their current 2% pay offer is not improved?

ScotRail began cancelling trains earlier this month amid the pay dispute, after many drivers chose not to work overtime or on rest days.

Due to delays in training new staff during the pandemic, it relied on drivers working extra hours in order to run normal services.

ScotRail's original Summer 2022 timetable had about 2,150 weekday services. This has now been reduced to 1,456 in the temporary timetable. The changes also mean the last train on many routes departs before 20:00.

"We've been able to improve the offer we'd made previously in a way that reflects the concerns which were expressed to us on cost of living," he said.

"It also gives the ability for the industry in Scotland to respond more positively to changes in demand as we recover from the pandemic."

Return of some services

ScotRail returned to public ownership on 1 April and is run by a company owned by the Scottish government.

Earlier, transport minister Jenny Gilruth said she hoped there would be an announcement of the return of some services on Thursday or Friday.

"The other action I have taken is to ask ScotRail to look at reintroducing a number of services," she said in response to a question in the Scottish Parliament from Tory MSP Graham Simpson.

"There will be more information forthcoming on that from ScotRail later today, I hope, or on Friday."

More train services could be put in place in time for Wednesday's World Cup play-off between Scotland and Ukraine at Hampden stadium in Glasgow.

At First Minister's Questions, Deputy First Minster John Swinney, standing in for Nicola Sturgeon who has Covid, said he was very confident that ScotRail would have additional services in place for the match.

He also confirmed negotiations were under way to resolve the ScotRail dispute.

Separately, the railway network is also facing the threat of strike action by RMT members at Network Rail from the middle of June.