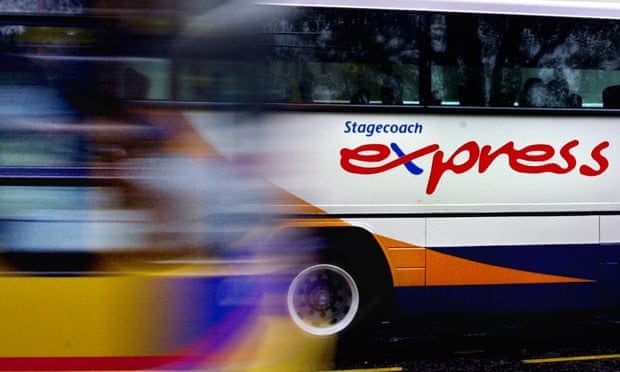 All-share deal would value Scotland-based coach operator at £445m
National Express is in talks to buy Stagecoach in a deal that would combine the UK’s biggest coach and bus operators and signal cost savings as the hard-hit industry emerges from the pandemic.

The all-share deal would create a business with a fleet of 36,000 buses and coaches and deliver “significant growth and cost synergies”, according to the two companies. Shares in both firms jumped on Tuesday after the talks were announced, giving them a combined market value of more than £1.9bn.

Stagecoach shareholders would receive 0.36 new National Express shares for each Stagecoach share they own, handing them 25% of the combined group. That would value Stagecoach at about £445m, representing an 18% premium on the closing price of the Perth, Scotland-based company’s shares on Monday.

Stagecoach has a fleet of 8,400 buses and coaches serving 1 billion passengers a year. Solely UK-focused, it operates coach and bus services across Scotland, as well as city buses in London, Manchester, Liverpool, Newcastle, Hull, Sheffield, Oxford and Cambridge. It also runs the Megabus coach service across the UK, Sheffield’s tram network, and the express coach service Oxford Tube in and out of London.

National Express runs fewer city bus services, mainly in Birmingham and the West Midlands, but it is the biggest coach operator in the UK and has an overall fleet of 28,000 vehicles, operating across the UK and in Spain, and runs school buses in the US. It also has a German rail contract. Stagecoach sold the bulk of its North American division for £214m in 2018 to focus on the UK.

Birmingham-based National Express employs 48,000 people, of whom 6,800 are in the UK, while Stagecoach has a UK workforce of 24,000. National Express said the deal would lead to a small number of job losses in the head office and back office, where only a “small percentage” of staff worked, while drivers would not be affected.

National Express has identified pre-tax cost savings of at least £35m, as it could use Stagecoach’s large depot network to run and maintain its coach operations. The deal would also speed up the expansion of its growth businesses such as private hire coaches, corporate shuttles and accessible transport.

Britain’s competition watchdog, the Competition and Markets Authority, declined to say whether it would investigate the deal.

There is little overlap in bus services, but the two companies compete on some coach routes in the UK. The regulator could force divestments in specific areas if there were any competition concerns, said Russ Mould, the investment director at the stockbroker AJ Bell.

Susannah Streeter, senior investment and markets analyst at Hargreaves Lansdown, said: “The deal is bound to come under intense scrutiny given the competition concerns but given the two companies have gone in different directions in recent years it may be more likely to jump over regulatory hurdles … questions could be raised however over the adverse effect on competition given the shorter airport transit shuttles operated by National Express, where Stagecoach is in a position to offer a rival service.”

She said the US school bus operation run by National Express was proving resilient and noted that the business was rolling out new bus services in Morocco. “The new group is likely to be hungry to find more opportunities in the rest of the world.”

Stagecoach’s founders, the Scottish businessman Sir Brian Souter and his sister Dame Ann Gloag, and their families still own about a quarter of the business, but started selling down their holdings in April, as part of a plan to reduce their ownership to 5% over the coming decade. Souter stepped down as chairman in 2019 but still sits on the Stagecoach board as a non-executive director.

Stagecoach pulled out of the UK rail market two years ago after being disqualified from bidding for three concessions in a row by the Department for Transport over pension liabilities, including the west coast route it had operated with Virgin Trains. National Express, once Britain’s biggest rail operator, was stripped of two big franchises about a decade ago and exited UK rail altogether in 2017.

Mould said: “There may be some nervousness around using public transport at present due to the lingering pandemic, but long term it seems inevitable that buses will remain a vital part of the UK’s transport network.”
Add Comment