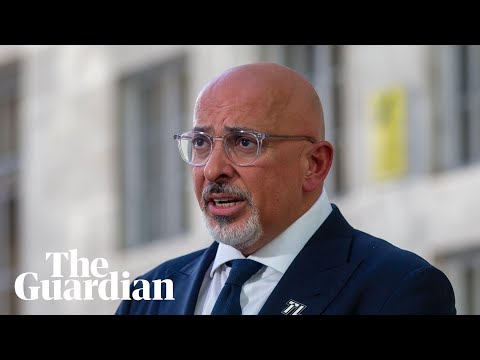 Minister says cutting isolation to five days would be helpful, but dismisses report that free tests are to end

The education secretary has called for the UK to show the rest of the world how to move from pandemic to endemic Covid, as he suggested it would be helpful to cut the isolation period to five days to ease workforce shortages.

Nadhim Zahawi, played down suggestions that the government was about to start charging for free lateral flow tests (LFTs), which would lead to fewer infections in the community being identified.

He said the ultimate aim was to move to a position where Covid was endemic in the UK and the country had learned to live with the virus.

His comments came on the same day that a leading statistician, Prof David Spiegelhalter, poured cold water on the idea of a big rise in intensive care admissions and deaths from the Omicron wave.

Asked whether Boris Johnson had taken a gamble in resisting lockdown measures over Christmas, he replied: “I mean, it was a gamble, and you know, I think the best we can say is, he may have got away with it, but we’re going to have to see in the next few weeks.”

There were 141,472 new lab-confirmed Covid-19 cases recorded in the UK on Sunday, the government said. A further 97 people died within 28 days of testing positive, bringing the total to 150,154.

Zahawi also said the government’s health experts and scientists were looking at whether it would be possible to move from asking people to isolate for just five days after a positive test, rather than the current seven days – recently cut from 10. He told Sky’s Trevor Phillips on Sunday: “It would certainly help mitigate some of the pressures on schools, on critical workforce and others. 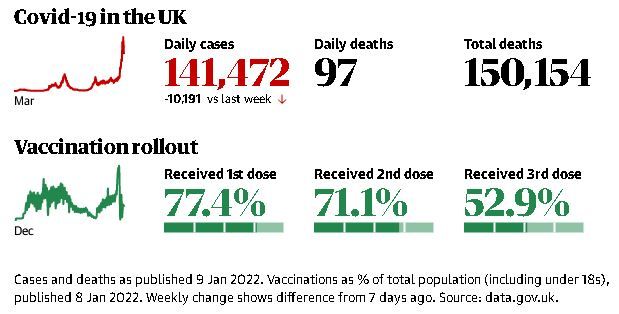 “But I would absolutely be driven by advice from the experts, the scientists, on whether we should move to five days from seven days. What you don’t want is to create the wrong outcome by higher levels of infection.

“I hope we will be one of the first major economies to demonstrate to the world how you transition from pandemic to endemic, and then deal with this however long it remains with us, whether that’s five, six, seven, 10 years.”

Rishi Sunak is reportedly one of a number of cabinet ministers supportive of a move to cut isolation to five days. The chancellor and other ministers, including the business secretary, Kwasi Kwarteng, would back the policy if it was supported by scientists, according to the Daily Telegraph.

The move to further cut the self-isolation period has been mooted in the past fortnight, but experts fear up to 30% of those released on day five may still be infectious. The US allows people to leave the house after five days, but citizens have to start isolating only after testing positive, rather than from their first symptoms.

Zahawi said about 8.5% of the schools workforce was off, with 90% of secondary schools so far having reopened after Christmas.

He said staff absence rates “will increase, no doubt, because now schools are back we’re going to see an increase in infection rates”.

Spiegelhalter said cases were “not going up as fast as they were and may have stabilised over the whole country”, but that they would not come down rapidly. “We’re certainly not going to see a big rise in intensive care admissions and deaths and those really severe outcomes,” he said.

He also said daily infection rates could still be hitting around 500,000, which would have been devastating without vaccines.

With the move from pandemic to endemic Covid, the Sunday Times reported free LFTs could be limited to high-risk settings such as care homes, hospitals and schools, and to people with symptoms. This was set out as an eventual aim by the government’s winter Covid plan, which said at some stage the government’s provision of free lateral flows would end and “individuals and businesses would bear the cost”.

Zahawi told Sky News this was “absolutely not where we are at”, with 425m lateral flows available for January to help identify cases in the Omicron wave.

The reports on LFTs were met with instant disapproval from opposition politicians including Scotland’s first minister, Nicola Sturgeon.

Sturgeon said testing was vital and the Scottish government would have to consider continued funding from its existing budgets, and raised the prospects of such a move affecting the way public expenditure was allocated to devolved nations.

The Scottish government accesses LFTs that are procured by the UK government on behalf of all four countries, and it pays for them via funding arrangements as part of the UK-wide national testing programme.

Labour joined Sturgeon in urging the prime minister against the move. The shadow health secretary, Wes Streeting, said: “This would be the wrong decision at the wrong time.”

Government sources have disputed the report and said it was too early to say what the future held for free lateral flow tests.

A government spokesperson did not address whether access to free tests would be scaled back in the future, but said: “Everyone can continue to get free tests and we are continuing to encourage people to use rapid tests when they need them.