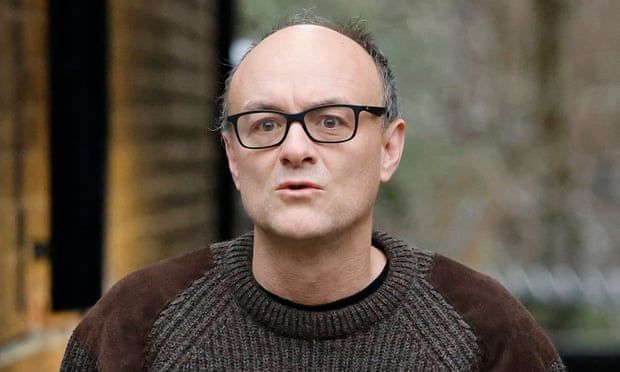 Music from ‘Abba party’ could be heard all over No 10, says Cummings

Boris Johnson’s former chief adviser accuses Sue Gray of not properly investigating gathering in the flat
Dominic Cummings has accused Sue Gray of not properly investigating the alleged “Abba party” in Boris Johnson’s flat during lockdown, saying the music was so loud that dozens of people working in the office downstairs could hear it.

In his first interview since the Partygate inquiry finished last week, the prime minister’s former chief adviser turned arch critic said the gathering that took place on the night he left No 10 was not a work meeting.

Cummings said Gray’s justification not to properly look into the event was “brazen”, suggesting she turned a blind eye and took a “fuck this” attitude.

In her report, Gray admitted she had just begun collecting evidence about the gathering on 13 November 2020 when the police got involved, and that she decided not to continue when Scotland Yard’s investigation concluded because “it was not appropriate or proportionate”.

In her review of the event, Gray said a meeting was held in the Downing Street flat with five special advisers, which Johnson joined at 8pm, and food and alcohol were provided. It became known as the “Abba party” because the song The Winner Takes It All was reportedly blasted out of the flat, allegedly because Johnson’s wife, Carrie, was celebrating Cummings’ departure.

Carrie Johnson was not mentioned in relation to the event in the Gray report. Over the weekend, her spokesperson did not deny reports that another party was held in the flat earlier in the year, on the prime minister’s birthday.

Some Tory MPs told the Guardian they feared a cover-up when the flat party was not properly investigated. Speaking to the journalist Suzanne Moore, Cummings said of the Gray team’s decision not to fully investigate the November 2020 flat event that “they have sort of just said: ‘Fuck this, we’re not going to get involved.’”

Recalling his surprise that it had gone unreported for so long, Cummings said: “Because we were in extreme lockdown it got no coverage. The media was so happy that I’d gone, no one wanted to talk about it.

“Dozens of people downstairs could hear it, so all the police had to do was interview any one of them to find out. You don’t have a work meeting, at the top of No 10, where the music is so loud that you can hear it in the fucking press office.”

Cummings suggested Johnson could still survive as prime minister, despite a slew of Tory MPs submitting no-confidence letters and questioning his leadership in light of the Gray report.

“He’s thinking if they don’t put him out before August, he’s got a reasonable chance of swinging the election,” Cummings said. “And he’ll be thinking: ‘Oh, I’m still here. I was close to disaster but just escaped.’ Also, he will be looking at Starmer and rightly thinking ‘he’s rubbish’.

“But remember, he doesn’t really want to be there very long. All he wants to do is not be a loser and not be put out in disgrace.”

However, Cummings added: “It definitely feels like the institutions are all kind of crumbling.”

In his apology to MPs last week, Johnson maintained that of the eight gatherings he attended looked at by Gray and the Metropolitan police he believed he was attending work events.

“They were part of my job,” he said, adding that was substantiated by the fact he was only fined for the birthday celebration that took place in the cabinet room in June 2020.

He claimed that staff at the parties, some of which continued into the small hours, believed they were working.

“It’s my strong impression that they genuinely believed that what they were doing was working. I certainly don’t think that they set out to deceive you about that,” Johnson added.