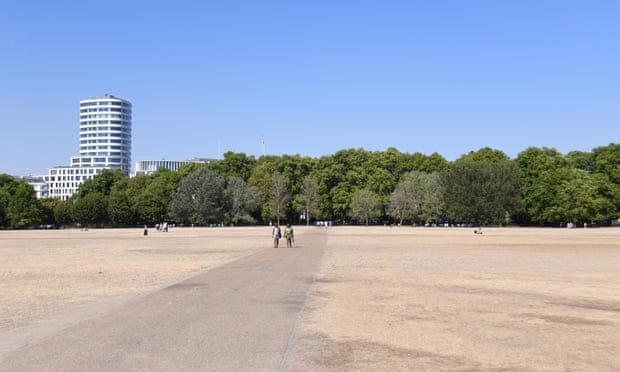 Amber heat warning in place in parts of England and Wales, and very hot weather expected over rest of weekend
Wildfires could continue to break out across the UK this weekend, as the Environment Agency (EA) warns that the drought in England could persist into next year.

The Met Office has issued an amber heat warning across parts of England and Wales, as regions are braced for temperatures as high as 35C.

The alert comes as a drought was officially declared in eight regions: Devon and Cornwall, Solent and South Downs, Kent and south London, Hertfordshire and north London, East Anglia, Thames, Lincolnshire and Northamptonshire, and east Midlands.

John Curtin, executive director for local operations at the EA, said that after the driest summer in 50 years, it would take “weeks’ worth of rain” to replenish water sources.

Three water companies, Welsh Water, Southern Water and South East Water, have all imposed hosepipe bans, while Yorkshire Water has announced a ban will start on 26 August and Thames Water is planning one in the coming weeks.

Dry weather is predicted to continue across the south this weekend, bringing a risk of more wildfires.

“For the rest of the weekend, across the south, there will be a continuation of the very dry and hot conditions,” the Met Office meteorologist Dan Stroud said.

“We’re looking at temperatures of up to 34C or 35C across the south, feeling a little bit fresher across the north, but temperatures up there still well above where they should be for the time of year.”

He warned: “It has been extremely dry for an extended period, and the ground and vegetation has been baked dry. So there is a significant risk [of wildfires].”

A blaze in Derbyshire has been tackled by four fire engines, while emergency services were called to put out fires in Dorset and east London.

Yellow warnings for thunderstorms will be in place on Sunday as the Met Office predicts heavy rain in most of Scotland and Northern Ireland.

The stormy weather is expected to move down to England and Wales on Monday.

“The current hot weather will make way for a thundery breakdown from the west, which will spread south and east in the early part of next week. Ahead of this, isolated but intense thunderstorms are possible Sunday, Monday and Tuesday,” Met Office meteorologist Jason Kelly said.

England had its driest July since 1935 this year, with the month also going down in UK climate history, exceeding temperatures of 40C on 19 July.
Add Comment