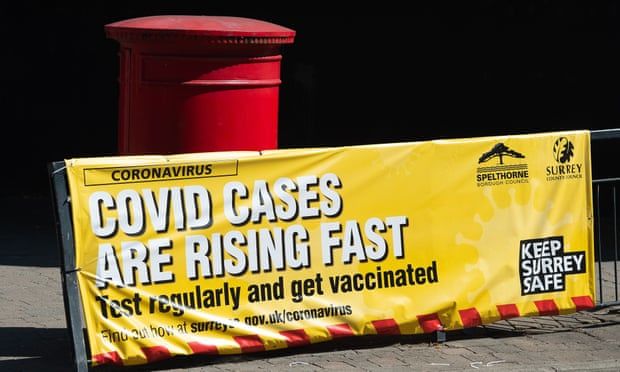 More than 8,000 people in hospital with Covid in UK

More than 8,000 people in the UK were in hospital with Covid on Wednesday – the highest figure for nearly six months – leading to fears of a resurgence in the virus’ ability to cause serious illness and death among the population.

In countries with high rates of vaccination, such as the UK, fewer people are predicted to become ill enough to require hospital treatment, even if infection rates remain high. But the latest figures show the highest number of patients on wards since 10 March.

The 8,085 people in hospitals across the UK represents a 6% increase on the previous week.

Nevertheless, the figures are still well below those recorded at the peak of the second wave. On 18 January, 39,254 patients with Covid-19 were in hospital – the highest at any point since the pandemic began.

Hospital numbers have been rising slowly but steadily since the third wave of the virus began in May. In Scotland, 928 patients are in hospital – the highest number since late February. In Wales, patient numbers stand at 428 – the highest since mid-March. 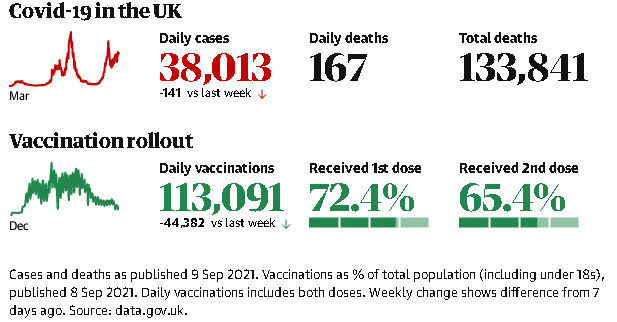 The news came as the health secretary signalled the government was likely to make vaccination mandatory for NHS staff in order to protect the public.

On a visit to Moorfields eye hospital in London, Sajid Javid said: “It’s right that we do everything we can to protect the most vulnerable from this virus: that is why we have already insisted that those staff that work in care homes get vaccinated and I think people know why that’s so important.

“The reason we have launched this consultation today for the health sector, for the NHS, is because obviously hospitals are full of vulnerable people and I think it’s our duty to make sure that we are considering this.

“We haven’t made a decision but we do want to listen to what people have to say because I think it is important that we show that patient safety will always be a priority.”

Asked whether NHS staff who refused to have the jab risked losing their jobs, Javid said: “I don’t want to prejudge the outcome of the consultation; it’s important this is done properly and we want to listen to what people have got to say. But patient safety will always be a priority.”

Javid said he was “confident” the vaccine booster programme would start later in September.

The Medicines and Healthcare products Regulatory Agency has said the Pfizer/BioNTech and Oxford/AstraZeneca vaccines are safe to use as boosters. But the Joint Committee on Vaccination and Immunisation has yet to give its advice to ministers.