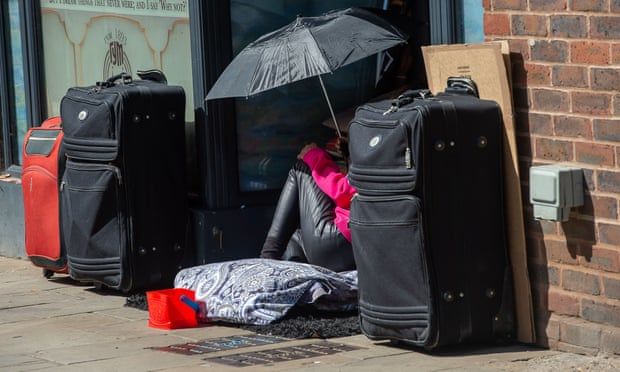 More than 1,200 people in the UK died while homeless in 2021, a 32% increase on the previous year, as cuts to mental illness, drug and alcohol, and housing services took their toll, according to research.

The annual audit by the charity Museum of Homelessness found most deaths occurred among people living in emergency housing or hostels. People sleeping rough or sofa-surfing accounted for 63 deaths, and seven fatalities were due to Covid-19.

Of the 253 cases where the cause of death was confirmed, 41% were related to drug and alcohol use, and 12% to suicide, which the charity said reflected the general inadequacy of mental health and addiction services provision.

“It’s heartbreaking to see so many people dying and to feel so helpless in the face of such a serious emergency. Government neglect means things keep getting worse with new provision for mental health, addiction and social housing failing to make up for previous cuts,” said Jess Turtle, a co-founder of Museum of Homelessness.

She added: “There needs to be a confidential inquiry into the deaths of homeless people to allow an honest appraisal of what’s happening to the UK’s most vulnerable people. There should also be mandatory fatality reviews for all local authorities – so lessons can be learned from each death.” 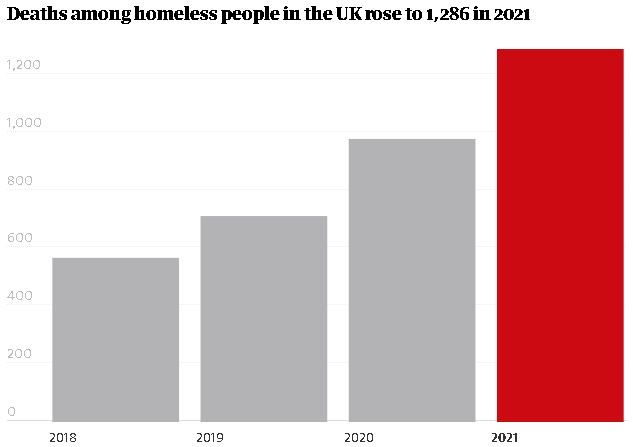 The charity said the cost of living crisis, increasing evictions and overstretched housing and homelessness budgets were likely to put the lives of many more homeless people at risk in the coming months.

A number of local authority areas recorded significant falls in the number of homeless deaths, showing “positive progress” according to Museum of Homelessness. They included Stirling, Manchester, Kingston upon Hull and Camden.

The charity said its Dying Homeless project used information from coroners’ inquiries, media coverage, family testimony and more than 300 freedom of information (FoI) requests to verify the details of each case.

Last year it verified 1,286 “real and actual” deaths across England, Scotland, Wales and Northern Ireland up from 976 in 2020, and 710 in 2020. This was likely to be an underestimate, it said, as not all authorities replied to FoI requests, including large councils such as Birmingham and Blackpool. 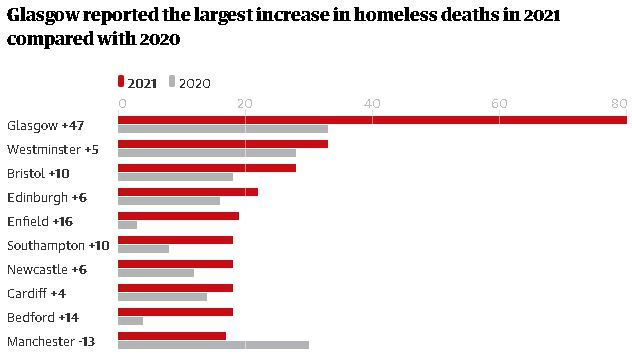 There were 325 homeless deaths in Northern Ireland, the figures show, although the Northern Ireland Housing Executive cautioned that this reflected a radically different definition of homelessness, and included many people in secure housing who would not be defined as homeless in the three other UK countries.

The latest official figures for homeless deaths, published by the Office for National Statistics (ONS) in December, estimated at least 688 people died while homeless in 2020, although this applied only to England and Wales.

This was a slight fall on record numbers recorded in 2019, attributed to the “Everyone In” scheme, when 37,000 homeless people were provided with a hotel room during the early months of the pandemic. Statisticians said difficulties collecting death registration during lockdown meant it may be an underestimate.

A government spokesperson said: “Every death on our streets is a tragedy. Our most recent statistics published by the ONS estimated that homeless deaths decreased by 12% in 2020 compared to the previous year. Even one death is one too many, which is why councils will receive £2bn over the next three years to support the homeless.”