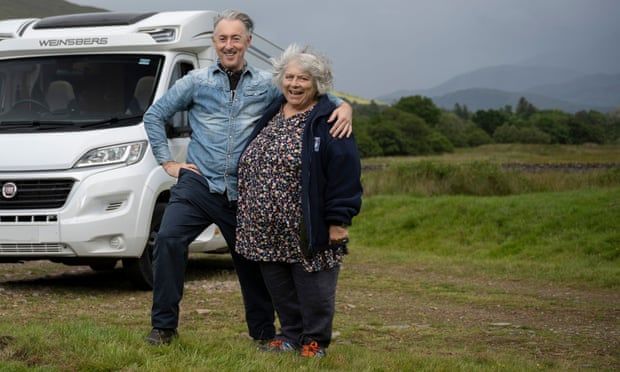 Minus the fury, this is a fair summary of Miriam Margolyes and Alan Cumming’s Caledonian travels – including a trip to Cawdor Castle – in Miriam and Alan: Lost in Scotland (Channel 4), the first in an unaccountable and possibly unconscionable series of three hour-long episodes to follow them trundling round the blameless land in a campervan, “rediscovering” their roots.

Margolyes’s shtick is not quite as relentless as it has been up until now in her late television career renaissance. It is nice for it to take something of a back seat here, when it has begun to seem effortful and wearying for purveyor and viewer alike. Still, there is enough left to satisfy those whose appetite for her humour remains unabated. We learn that her knickers fell off during her first driving test (dearth of elasticity rather than abundance of lustiness), get an “as the actress said to the bishop” in and various play made with hoses (“You want to get your nozzle out”) and roses (“massive hips”) in the garden. Godspeed.

A more justifiable – and, in a twisted way, welcome – anticlimax was Cumming’s visit to his old home, where he grew up with an abusive father and which holds nothing but unhappy memories of being neglected, terrorised and traumatised. His quiet, charming gentleness that has brought out the best in Margolyes seems to have brought out the very worst in his father. “He was particularly cruel to me and my brother,” he tells Margolyes matter of factly, as they emerge from the shed in which his father once forcibly shaved his head. “But everyone was scared of him.” They sit in the sun and wait for the shadows to recede. Cumming decides that, although they have permission to go into the house from the current owners, he won’t. He looks around the garden instead. “It would be a lovely place to live if you didn’t have massive childhood trauma in it.”

The rest is filler. If you’re in the mood for the gentlest of travelogues, the slightest of narratives and some nice views, you won’t be disappointed. If you are looking for anything else, you’ll probably be strutting and fretting quite a bit before the hour is done.
Add Comment