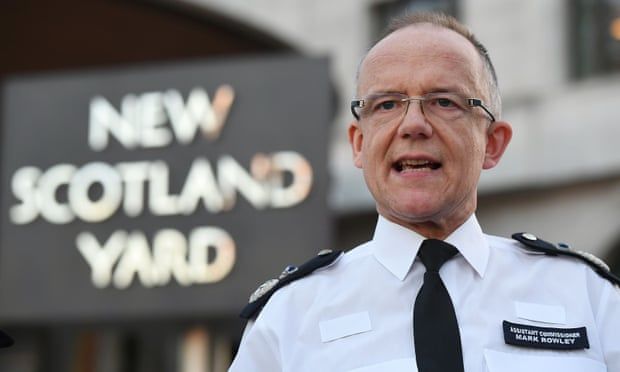 It is not the done thing for candidates for the Metropolitan police commissionership to publicly discuss their candidacy, and those who apply will face an anxious wait to see if they have made the shortlist.

Of the possible candidates remaining, Mark Rowley is a proven operator under intense pressure on a national stage. He was head of counter-terrorism in 2017 when Britain was hit by a wave of terror attacks in London and Manchester.

Rowley was close to the commissioner before Cressida Dick, Bernard Hogan-Howe, and seen as intelligent and a moderniser.

He applied in 2017 and lost out to Dick. One strike against him then was tension with Theresa May, then the home secretary. But in truth, the London mayor, Sadiq Khan, was in the driving seat to select the Met commissioner, and saw a chance to make history by appointing Dick as the first-ever female holder of the top policing post.

Rowley started as a beat officer in the West Midlands, where he was savagely attacked by a gang of football hooligans. He rose to become the chief of Surrey police, joining the Met as an assistant commissioner.

He left policing in 2018. In his time away he co-wrote a report on extremism and also wrote critically of the Met’s use of stop and search.

As well as being chief constable of the Devon and Constable force, Sawyer leads for police chiefs on performance. That is where he has face time with ministers and officials, and has impressed some. He has had to negotiate a government wanting some measures on performance amid concerns from chiefs it is a return to priority-skewing targets.

Sawyer will stand down as chief of the south-western force in August. His toughest time was the shooting in Plymouth when five people died at the hands of gunman Jake Davison. Police face a hard time explaining their decision to return a gun licence to Davison just before the shooting, having taken it away for an alleged clash in the street.

Sawyer previously served in the Met tackling violence, and also as a commander in counter-terrorism. He recently applied to be the head of the policing inspectorate, losing out to Andy Cooke.

“Ticks the boxes,” said one fellow chief, who added: “He is popular with some in the Home Office.” City Hall sources would also be interested in Andy Marsh’s ideas for the Met.

Marsh has recently been appointed as chief executive officer at the College of Policing, which sets the standards for law enforcement. The timing of this appointment may be one factor deterring him from applying for the Met commissionership.

He describes himself as “a transformational chief constable” having led two forces, first Hampshire and then Avon and Somerset. There he suffered the wrath of government when a statue of a slave owner was pulled down and dumped in a canal during Black Lives Matter protests. Some in government thought police should have done more to intervene.

Marsh can talk engagingly about how greater use of data and analytics can boost crime fighting, music to the ears of the policing minister, Kit Malthouse.

An assistant commissioner in the Met, Ephgrave fronted the Met’s press conference after Wayne Couzens was sentenced to a whole-life term for the murder of Sarah Everard.

Two sources say he may be considering a bid. Few think a Met insider is what government or City Hall want, but Ephgrave can be personable and insightful. He is a former chief of Surrey police.

Currently a Met assistant commissioner and head of counter-terrorism, Jukes was a former chief of South Wales police and pioneer of police use of live facial recognition technology, an initiative steeped in controversy. May sit this round out and be a strong contender for deputy commissioner and likely candidate next time.

Stephen House, acting commissioner, was Dick’s deputy and the first chief of Police Scotland when all its forces joined to create a single one.

Martin Hewitt, chair of the National Police Chiefs council, is a former Met assistant commissioner who joined policing from the military.

Simon Byrne, chief of the Police Service of Northern Ireland, whose reputation as a Met assistant commissioner would have made him the candidate feared by sections of the Met rank and file.