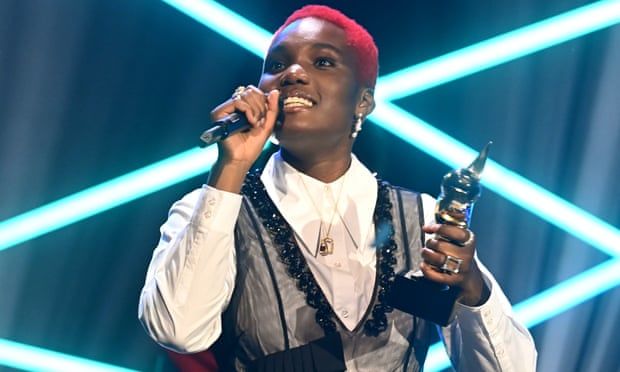 Arlo Parks has won the 2021 Mercury prize, awarded to the year’s most outstanding British album, for her debut Collapsed in Sunbeams.

Presenting the award, judge Annie MacManus said: “We chose an artist with a singular voice who uses lyrics of remarkable beauty to confront complex themes of mental health and sexuality, and connects deeply with her generation as she does so.”

Parks, 21, thanked her family and her team, saying: “It took a lot of sacrifice and hard work to get here, and there were moments where I wasn’t sure I would make it though, so thank you very much.” She wins £25,000.

The singer-songwriter was born in London and is of west African and French heritage. Her album’s intimate and highly empathic songcraft confronts depression (Black Dog, Hope), queer sexuality (Green Eyes, Eugene) and relationship strife throughout, in pithy and vivid character studies. “That sense of rawness is what people are gravitating to”, she told the Guardian in 2020. “I’ve had so many conversations with so many different kinds of people – it’s opened my heart, which is useful when I’m writing songs.”

Collapsed in Sunbeams reached No 3 in the UK charts when it was released in January, and won Parks the British breakthrough award at this year’s Brit awards.

She is one of the youngest ever winners of the prize alongside other early-20s winners such as Arctic Monkeys, Dave and Ms Dynamite, though the youngest ever remains Dizzee Rascal, who was 19 when he won for Boy in Da Corner in 2003.

Ten of the 12 nominated artists were appearing on the shortlist for the first time, ranging from the klezmer-meets-post-punk of septet Black Country, New Road – whose frontman Isaac Wood performed at the ceremony wearing a snorkel – to the clicks, pulsations and cosmic chords of electronic composer Hannah Peel, and idiosyncratic takes on neo-soul from Celeste, Arlo Parks and Sault. Over half the nominees were Black British, with other first time nominees including Ghetts’ atmospheric bildungsroman rap album Conflict of Interest, and Nubya Garcia’s joyous, polyrhythmic jazz odyssey Source, topped by her own stirringly free saxophone lines.

The Scottish post-rock band Mogwai earned their first nomination after 10 studio albums and seven soundtrack recordings, capping a year in which their album As the Love Continues also became their first UK chart-topper. Laura Mvula, performing at the ceremony with a majestic pink keytar, received her third nomination for the 80s-inspired R&B of Pink Noise – only Laura Marling and Radiohead have been nominated more times without winning.

A change in the rules after the controversial barring of Japanese-British pop star Rina Sawayama from 2020’s shortlist meant that non-British artists who have lived in the UK for more than five years are now eligible. This meant Berwyn, a Trinidadian rap and R&B musician who made his mixtape Demotape/Vega in a Romford bedsit, could be nominated in 2021. “I didn’t even have a pair of working headphones,” he told the Guardian, saying his album “just came out of blood, sweat and tears; out of the overwhelming need to get out of the situation” in his “absolute shithole” of a flat. He gave the night’s most riveting performance, of the song Glory solo on piano. 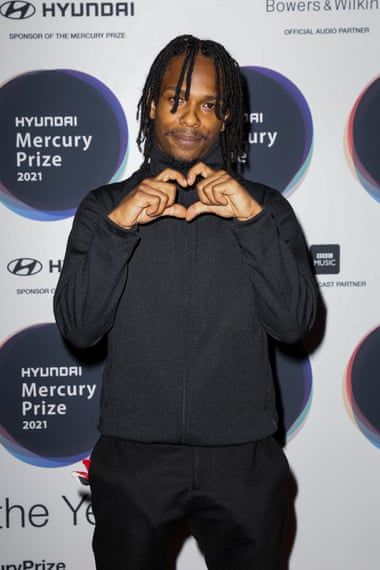 Berwyn at this year’s Mercury ceremony.

Another non-British name snuck on to the shortlist as part of a wider ensemble, and was also the oldest-ever nominee: 80-year-old American jazz artist Pharoah Sanders, who brought wondrous saxophone and vocals to the ambient contemporary classical composition Promises, by UK producer Floating Points with the London Symphony Orchestra also performing.

The only previous winners on the shortlist were Wolf Alice, who won in 2018 with second album Visions of a Life. Their nominated album Blue Weekend reached No 1 when it was released in June, and is one of the year’s most critically acclaimed LPs.

The prize, founded in 1992, aims “to recognise and celebrate artistic achievement, provide a snapshot of the year in music and to help introduce new albums from a range of music genres to a wider audience”.

The judges said the shortlist was “testament to the strength of British music” that the albums came out of a year dominated by the Covid-19 pandemic. The judging panel included last year’s winner Michael Kiwanuka, Hazel Wilde of 2020 nominees Lanterns on the Lake, jazz star Jamie Cullum and alt-popper Anna Calvi, as well as broadcasters, journalists and music industry figures.

Speaking on BBC 6 Music after her win, Parks said: “​I’m still coming off my little cloud – speechless for now, but very grateful.” Asked what she was most proud of in the album, she said: “The storytelling, the honesty and the humanity; and the fact that I was able to talk about things that were really important to me and affected me, in an honest way.​” She said she wanted to continue to use music “as a tool for personal healing”.