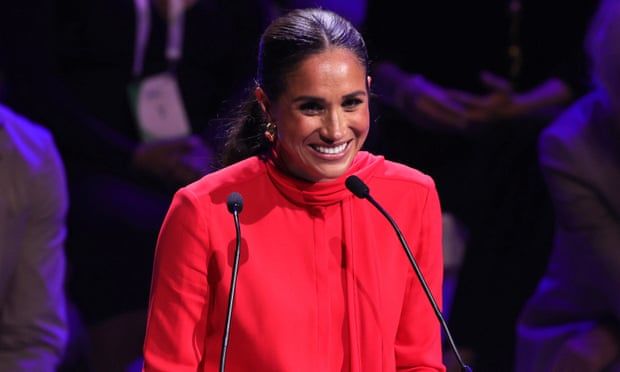 The Duchess of Sussex has urged young leaders from around the world to “cement their place in history” by working to “create a better future”.

Opening the One Young World summit in Manchester, Meghan told delegates from 202 countries and territories: “You are the future … you are the present.”

She added: “You are the ones driving the positive and necessary change needed across the globe now, in this very moment.”

In her first speech in Britain since she and Harry left for California, she said it was “very nice to be back in the UK” and to be back at One Young World, with which she has been a counsellor since 2014.

She spoke of her “nervousness” and the “pinch-me moment” of her first summit. “I was the girl from Suits, and I was surrounded by world leaders, humanitarians, prime ministers and activists,” she said.

By the 2019 summit, she said it was “fair to say, my life had changed”. Talking about motherhood, Meghan said: “My worldview had expanded exponentially, seeing the global community through the eyes of my child [Archie, born 6 May 2019], and I would ask what is this world he would come to adopt, and what can we do, what can I do to make it better.”

She was thrilled once again to be back with Harry. “To meet again here with him by my side makes it all feel full circle,” she said.

“We often hear people say the time is now, but I’m going to double down on that by saying that your time is now. The important work can’t wait for tomorrow.

“And this week the world is watching as you cement your place in history by showcasing the good that you are doing today in the present moment, as we embrace the moment of now to create a better tomorrow.”

Meghan, who arrived hand in hand with Harry, received huge cheers as she walked on to the stage at Manchester’s Bridgewater Hall before 2,300 delegates. Her last UK speech was in March 2020 on International Women’s Day.

Other counsellors addressing the summit included: Sir Bob Geldof, who spoke about the dangers of nationalism; the former Irish president Mary Robinson, who spoke on leadership; and the Greater Manchester mayor, Andy Burnham.

The couple took the train from London to Manchester, having travelled to Euston station in an electric Range Rover accompanied by two former Metropolitan police officers, understood to be part of their private security detail.

They are staying at their former marital home, Frogmore Cottage, close to the Duke and Duchess of Cambridge’s new home Adelaide Cottage in Windsor, though it is not known if the couples are scheduled to meet or if the Sussexes will visit Charles, or the Queen, who are both at the Balmoral estate in Scotland. 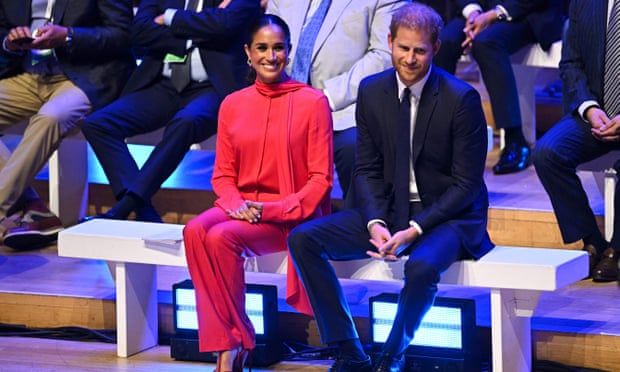 Meghan, Duchess of Sussex, and Prince Harry arrived at the summit hand in hand.

The trip comes just days after Meghan’s wide-ranging interview with The Cut magazine in which she said it takes “a lot of effort” to forgive and hinted that she can “say anything”.

She also said that “just by existing” she and Harry were “upsetting the dynamic of the hierarchy” before they stepped down as senior working royals in 2020.

The Manchester engagement is the first of several this week, which will see the couple attend an event in Düsseldorf in Germany to launch the one-year countdown to the Invictus Games, founded by Harry.

On Thursday, they will return to London for the annual WellChild awards where Harry, as patron, will deliver a speech.