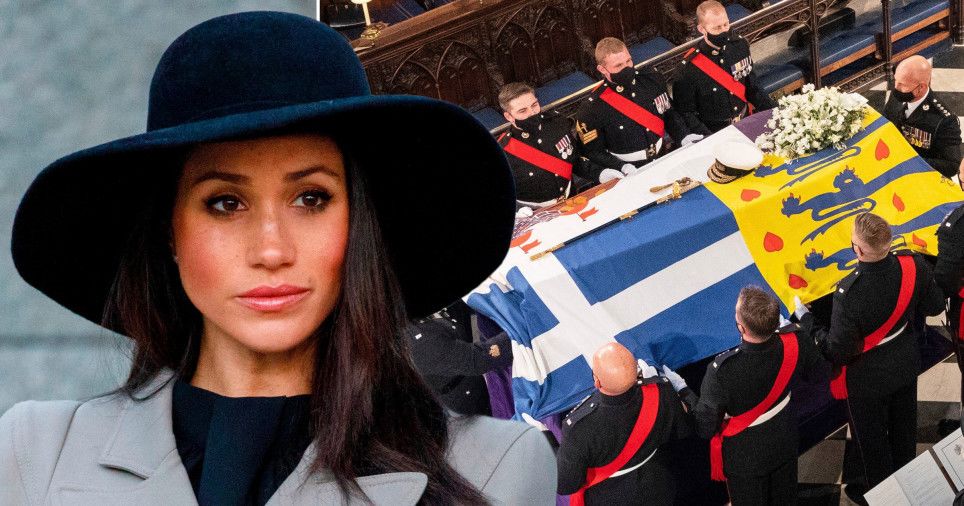 Meghan Markle is also grieving the loss of Prince Philip and her thoughts are ‘very much’ with the family today, her friend has said.

The Duchess of Sussex was advised by her doctor not to fly from California for today’s funeral because she is pregnant with her and Prince Harry’s second child.

Tensions remain between the Royal Family and the Sussexes, one month after their bombshell interview with Oprah Winfrey which sent shockwaves through the palace.

Harry, who was seen walking together with his brother William after the ceremony, could have a chance to build bridges with the family while he is back in the UK.

Meghan hasn’t had the same opportunity, but her friend and London-based journalist Omid Scobie said ‘her mind is very much on the situation over here’.

Speaking to ABC, he said: ‘We know that she’s supporting Harry in this very difficult week for him, but she’ll also be sad because this is also the loss of a family member for her.

‘She grew very close to the Queen and Prince Philip over the recent years. It was probably her strongest relationship within the family and those relations then get smaller this week. It’ll be a sad day for her.’ 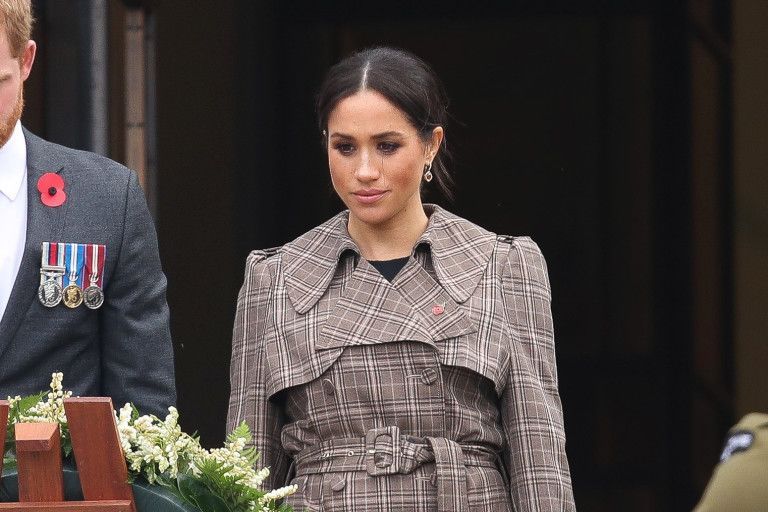 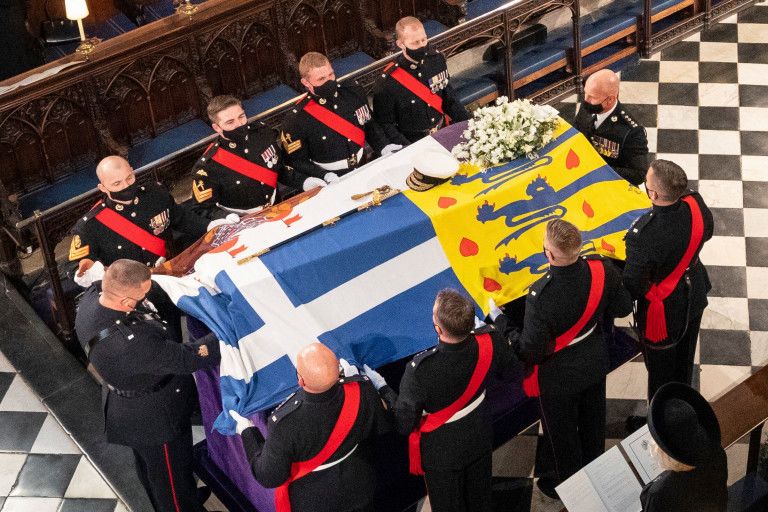 Meghan was watching the funeral from her home and she and Harry had both chosen flowers for a wreath laid in honour of Philip in St George’s Chapel.

It contained a handwritten note from the Duchess, although it is not known what she said.

Leading CBS’s coverage of the funeral was Gayle King, who said she suspects ‘family differences will be set aside for the day’.

She added: ‘William and Harry, there’s no secret about this, have had a strained relationship you could say since Harry stepped away from his royal duties.’

A Buckingham Palace source told the Daily Mail that everyone was ‘walking in eggshells’ prior to the Duke of Sussex’s return to the UK.

They added: ‘To be fair, William and Harry have made clear they wish to focus on mourning their grandfather and do not want anything to get in the way of that.

‘But it has made everyone doubly nervous about saying anything that could be remotely construed of being critical of the other side. It’s been a minefield.’ 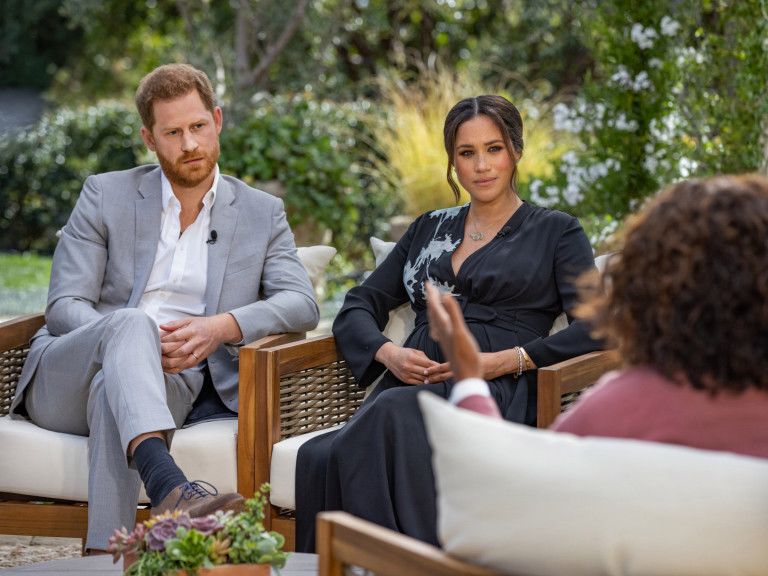 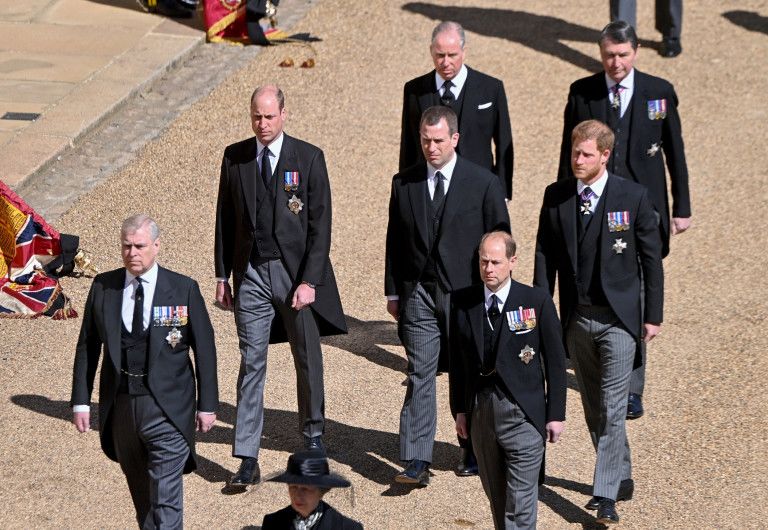 William and Harry were separated as they walked into the chapel, but they got the chance to speak after the ceremony

William and Harry were separated by their cousin Peter Phillips as they walked in a line behind their grandfather’s coffin today.

But after the ceremony, Kate Middleton, the Duchess of Cambridge, dropped back and let the estranged brothers walk together.

The pair were separated for more than a year following a rift, with Harry admitting their relationship is ‘space at the moment’ after he stepped down as a senior royal for good.

It comes after Harry and Meghan made a number of explosive claims about the Royal Family.

Perhaps one of the most shocking, was that unnamed member of the family was accused of raising ‘concerns’ about what colour their baby Archie’s skin would be.

Meghan, 39, also said she had suicidal thoughts as she struggled with the pressure of being a senior royal, and claimed she couldn’t get any help from Buckingham Palace.

She also suggested Archie was not given the title of prince because he is mixed-race, something royal experts have disputed, saying he didn’t get this title due to a specific part of royal protocol.

Meghan also said she received no help from the palace in shutting down rumours that she made Kate Middleton cry during a bridesmaid dress fitting, claiming it was actually the other way round.

Harry said his father Charles ‘stopped taking his calls’ after his move to the US and spoke of a deep rift between him and his brother William.

In the aftermath of the interview, Buckingham Palace said in a statement that the racial issues raised were ‘concerning’. It added that some ‘recollections may vary’.

William later commented: ‘We are very much not a racist family.’