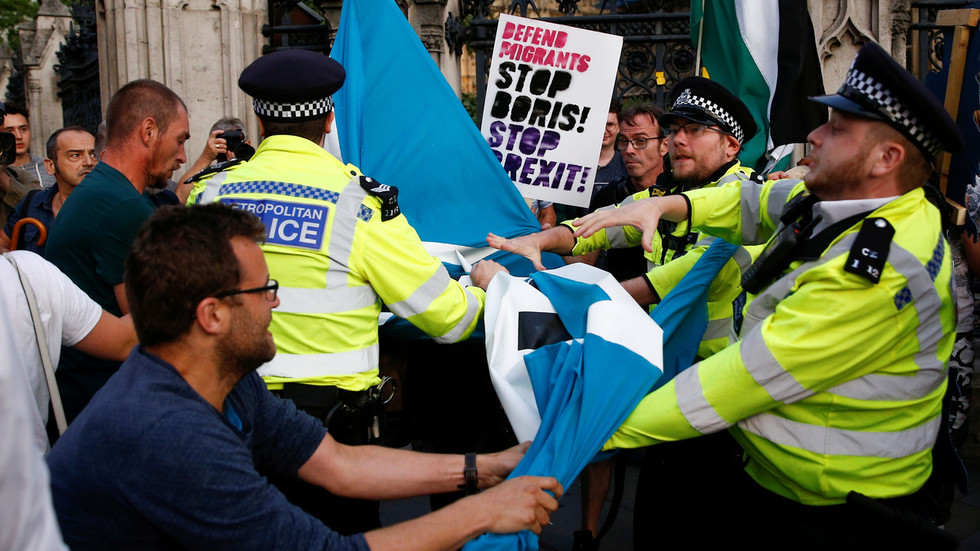 Majority of Brits believe violence against lawmakers is ‘price worth paying’ to get their way on Brexit, whichever way it is

A survey based on polling from YouGov and conducted by academics at Cardiff University and the University of Edinburgh found 71 percent of leave voters in England think using violence against UK lawmakers is worth it to get Brexit done.

Voters in Wales also polled as high as their English counterparts, with slightly less in Scotland – 60 percent – claiming that attacks on MPs could be defended.

When it comes to remain voters, 58 percent in England thought it was justified if it resulted in the UK staying in the EU and abandoning Brexit altogether. A slightly lower amount of remain voters in Wales and Scotland – but still a majority – also backed violence as a means to get what they want.

A greater number of those taking part in the survey also insisted that turning on their fellow citizens during Brexit protests, even if it resulted in them being “badly injured,” would be fine in their eyes.

Many people on social media expressed their shock at the figures, with one person asking: “What have we become?” British actor Stephen Mangan simply said: “We’ve completely lost our minds.”

Others angrily tweeted that if individuals do turn on each other over Brexit, then “You can all get what you f**king deserve.”

It comes as a number of UK media outlets report Brussels giving the green light to a Brexit extension but not setting a date to that delay until early next week. PM Boris Johnson warned UK lawmakers on Friday that he’ll push forward with plans for leaving the EU and his domestic agenda if they reject his request for a snap poll in the House of Commons on Monday.
#Boris Johnson  #Johnson
Add Comment