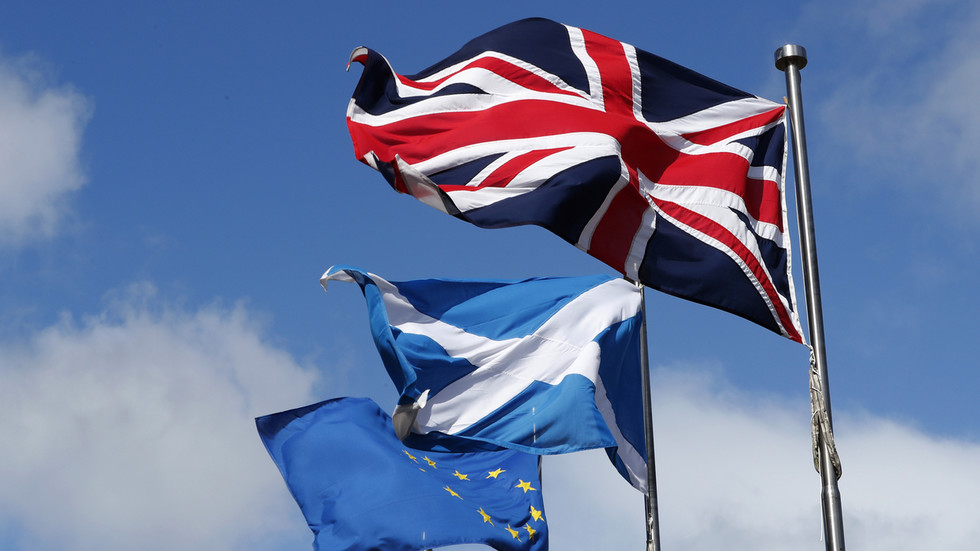 London takes aim at Sturgeon after Scottish leader says EU flag must be flown on government buildings, not Union flag

The British foreign minister has slammed Nicola Sturgeon after the Scottish leader elected to take down the Union flag on all days of the year apart from Remembrance Sunday but leave the EU flag flying.
“She’s really not good at listening to people when they make their voices known at referenda” James Cleverly, UK minister of state for the Middle East, told LBC Radio on Friday morning.

“Politicians should deal with the world as it is and rather than the world as they wish it was” Cleverly stated, adding that Scots voted to remain part of the UK and that the people of the UK had voted to leave the EU.

The British foreign minister’s comments come after it was revealed on Thursday that First Minister Nicola Sturgeon had formalised an old decree that says the Union flag should only be flown over Scottish government buildings on Remembrance Day.

This decision has caused further outrage as the European Union flag will continue to fly next to the Saltire after the Scottish National Party voted in January 2020 to retain it despite the UK officially leaving the EU that same year.

The Scottish Conservative constitution spokesman said on Thursday that the Sturgeon’s government should be focusing on “more important priorities,” adding “we should not be surprised. Like all nationalists, Sturgeon is obsessed with flags.”

Scottish Tory leader Douglas Ross said: “Token gestures such as this serve no purpose other than to distract from the extreme challenges facing Scotland.”

Despite Sturgeon’s push for another independence referendum in 2021, the Scottish leader is increasingly coming under fire for her management of the Covid-19 pandemic and her role in the botched handling of harassment complaints against former first minister Alex Salmond sparking a parliamentary inquiry.
#COVID-19  #Covid
Add Comment