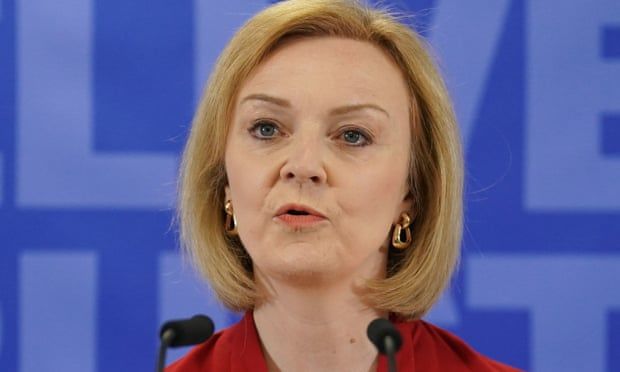 Truss, who has the third highest number of Tory MPs’ votes – behind Rishi Sunak and Penny Mordaunt, promised to scrap a planned rise in corporation tax and suspend green energy levies, costing more than £20bn a year overall.

The unexpected offer, on top of an existing pledge by the foreign secretary to reverse a rise in national insurance, worth another near-£11bn a year, came as the would-be successors to Boris Johnson joined a Zoom Q&A hosted by the Conservative Home website.

Thursday’s second round of voting by Tory MPs, a process that will eventually whittle the candidates down to a final two with the winner then chosen by party members, saw Truss lagging well behind Sunak, the former chancellor, and Mordaunt, the surprise package of the race so far, who is now the bookmakers’ favourite.

After criticism of a somewhat flat campaign, Truss used a question about the cost of living crisis to set out significant new tax cut proposals.

“We immediately need to start putting money back into people’s pockets, we know families are struggling to make ends meet at the moment,” she said. “I would reverse the national insurance rise; I opposed it in cabinet at the time because I thought it was a mistake, I think it’s even more of a mistake now when we’re facing such strong economic headwinds.

“I would also have a temporary moratorium on the green energy level to cut £153 from people’s energy bills. And I would also not do the corporation tax hikes because I think it’s vitally important that we’re attracting investment into our country.”

Truss, along with some other candidates, had previously said she would reverse the national insurance increase, intended to help improve social care.

It has been estimated that scrapping the planned rise in corporation tax from 19% to 25% next year would cost about £15bn a year. Suspending green levels on energy bills would cost an estimated £5bn a year.

Labour has condemned an “arms race” of uncosted tax cut pledges among candidates. Sunak has said he would wait to stabilise inflation before cutting any taxes.

In a boost to Truss, shortly after the debate the attorney general, Suella Braverman, who was eliminated from the contest after finishing last in Thursday’s MPs’ vote, reiterated her call for supporters to switch to the foreign secretary.

Braverman is ideologically close to Kemi Badenoch, the former levelling up minister, who along with backbencher Tom Tugendhat is still in the contest, and came fourth in Thursday’s vote.

But in a robustly worded message to supporters, Braverman urged them to “look realistically at the numbers” and back Truss, the other candidate seen as being firmly on the right of the party.

“Liz and Kemi are not both going to make it into the final two,” Braverman wrote. “So a decision needs to be made to back one of them. The one we should back, I’d argue, is the one who can get to the final round: Liz can, Kemi cannot.”

In the ConservativeHome debate, Mordaunt, who has been the subject of a spate of negative briefings since emerging as a favourite, said she hoped for “a positive contest”. She said: “I don’t want mudslinging. Without that teamwork, we can’t deliver.”

In her closing speech the international trade minister pitched herself as the candidate who could take on Labour.

“We need to win at the next general election, and what all the polling shows is that you can only win with me,” Mordaunt said. “Every poll in our party, and in the country, I top it. I win against Keir Starmer in London; I poll the highest in both red wall and blue wall seats; I lead with women, with young people; and I also have the best reach in Scotland.

“So I have some question for you: do you want to win the next general election, or do you want to hand everything that we have achieved to the Labour party?”
#Boris Johnson  #Johnson
Add Comment